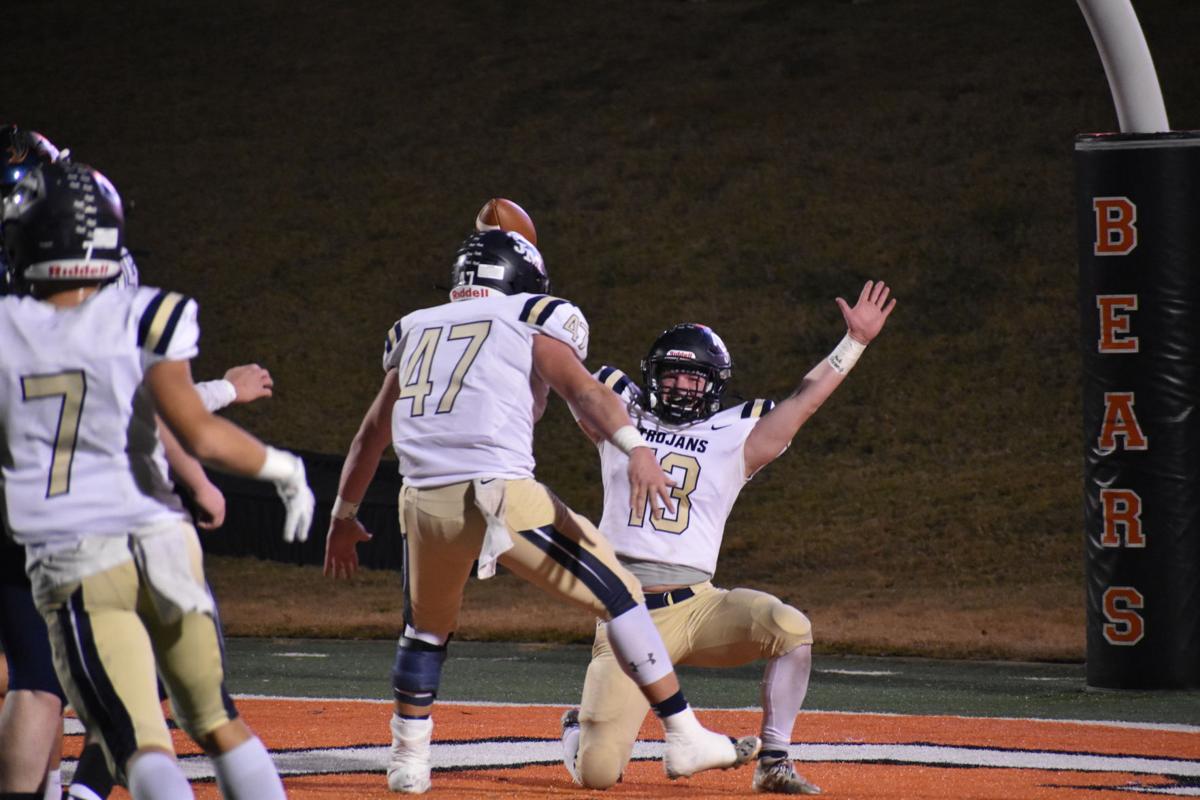 John Milledge senior Justin Aldridge scooped up a Valwood fumble and scored early in the fourth quarter to put his team up 55-13 on the way to the state championship. 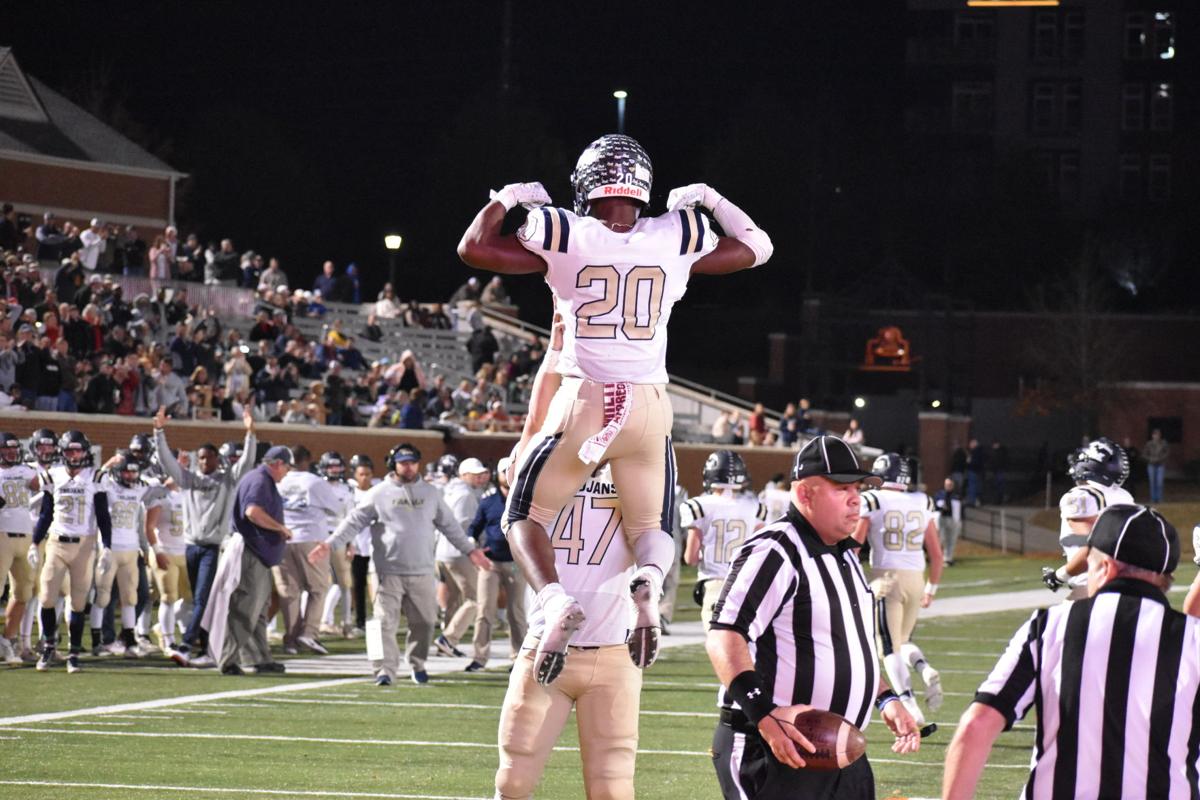 JMA running back Amaad Foston (20) finished Friday’s AAA state championship game having rushed for 423 yards and eight touchdowns on 41 carries, unofficially. The junior has put up some big rushing totals in his now three seasons but nothing like what was seen in Macon with the title on the line. 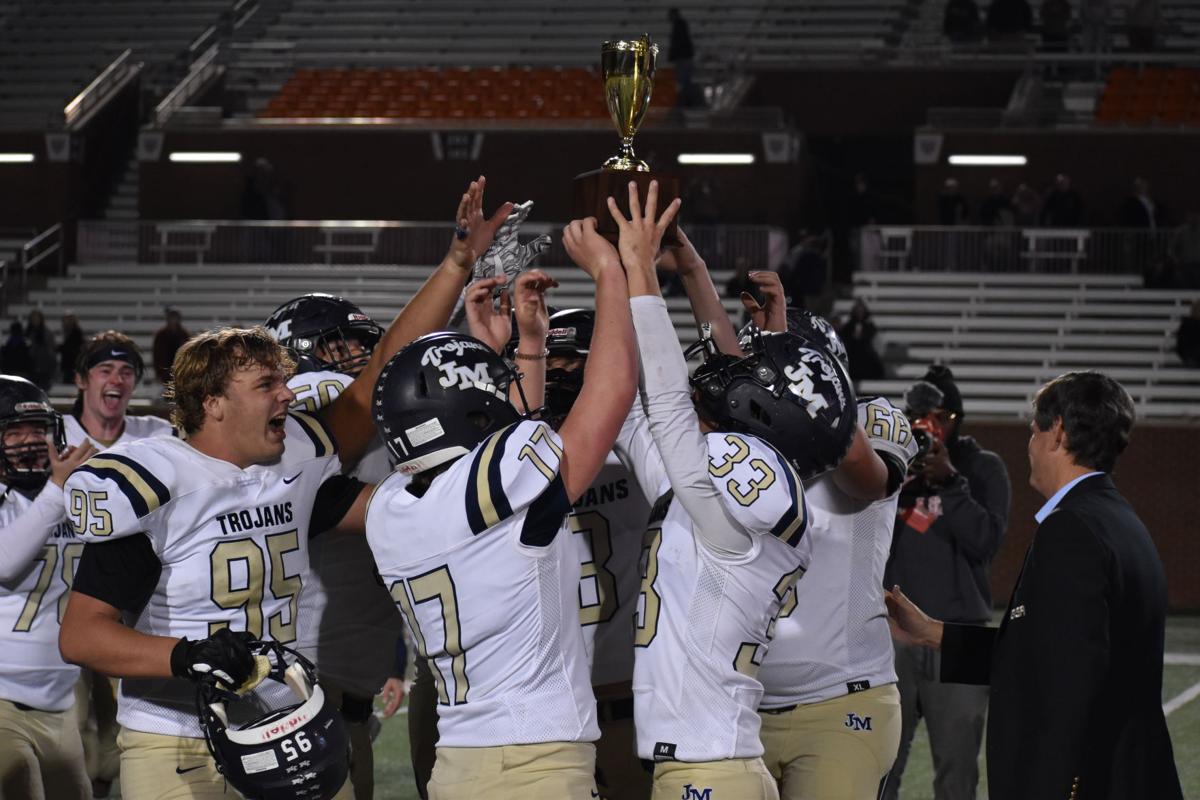 Trojan players got to hoist the trophy for the second time in four seasons.

John Milledge senior Justin Aldridge scooped up a Valwood fumble and scored early in the fourth quarter to put his team up 55-13 on the way to the state championship.

JMA running back Amaad Foston (20) finished Friday’s AAA state championship game having rushed for 423 yards and eight touchdowns on 41 carries, unofficially. The junior has put up some big rushing totals in his now three seasons but nothing like what was seen in Macon with the title on the line.

Trojan players got to hoist the trophy for the second time in four seasons.

MACON, Ga. — Two of the top GISA football programs of the last decade squared off for the state championship Friday night, but only one left Mercer University’s Five Star Stadium a winner.

The John Milledge Academy Trojans capped off a 13-0 campaign as they vanquished the Valwood Valiants 62-19, giving JMA both its second state title in four seasons and the second in school history.

Trojan head coach JT Wall was sopping wet having just received a celebratory Gatorade bath from his players during the postgame interview. He didn’t seem to mind.

“It hasn’t really sunk in to be honest with you,” Wall said of the championship. “That was the longest fourth quarter I’ve ever seen in my life. I just can’t say enough about these players and coaches. They’re special. It’s a good feeling.”

The 62 points the Trojans put up is not the only eye-popping statistic from the huge win. Amaad Foston, soon to be a two-time GISA All-State selection, carried the football an unofficial 41 times for 423 yards and eight touchdowns. The sought-after junior put up an all-time performance on the game’s biggest stage that won’t soon be forgotten. The Valiants knew Foston would be getting the football, they just couldn’t do anything to stop it.

“When the running game’s going the way it’s going we’re going to stick with it,” said Wall. “I can’t say enough about Coach Mahler (Cody, the team’s offensive line coach) and what he’s done with that offensive line this year playing multiple guys everywhere. Different guys stepped up and really just made us dominant up front.”

Foston came into Friday’s ballgame 74 yards shy of the 2,000-yard mark, one he eclipsed by a mile. His ridiculous-sounding eight-touchdown performance also puts him at 38 touchdowns on the season, good for an almost three-TD per game average. Three touchdowns, by the away, is also how many he scored in the game’s second quarter alone Friday night.

“I was just expecting to come in and do my thing,” said Foston. “The goal whenever I got the ball was to just try and get that first down or touchdown.

The junior bruiser has had some big nights in his now three-year varsity career, but never in the state championship game. He was held up for minimal yardage last year when the Trojans lost the title to Frederica, but was ready to redeem himself and his team in front of the big championship crowd.

As Wall mentioned, Foston couldn’t have done it on his own. The offensive line was opening up massive holes, enabling him to get into the second level where he broke tackle after tackle on his way to racking up his huge totals.

“We had a chip on our shoulder,” Coach Mahler said, referring to the 2018 finals loss. “We had to challenge them because this was a really explosive team that reminded us a lot of that Frederica team last year. We didn’t want to come here and screw the pooch like we did last year, for lack of a better phrase, especially our O-line. One of the big question marks we had this year was how strong we could be up front. These last three weeks we’ve challenged them and they’ve accepted that challenge. When you have a running back that runs for 400-plus yards — I think they did a pretty dadgum good job. That was a good defensive front we faced tonight and we moved them off the ball and created gaps.”

Defensively the Trojans entered knowing they had to slow down an explosive Valwood offense that boasts weapons all over the field, especially junior wideout Aalah Brown. He got his catches and a couple of big plays as exceptional athletes like him do in big games, but he was held to just one touchdown that came as the game’s first score. Other than that though, the Valiants could never really get anything going when it was still a ballgame. That was thanks to the JMA defense that forced a clutch seven turnovers on the night — three interceptions, three fumbles and a kickoff recovered deep in Valwood territory.

“Our guys knew what they were up against,” JMA defensive coordinator Justin Mills said. “Valwood’s got a very talented team with a lot of fast, athletic receivers, good O-line and a good quarterback coming back from an injury we knew we were going to have our hands full with. But we did feel like we could get some pressure on him and force him to make some throws we could make some plays on.”

Sophomore Marcus Prestwood collected two more interceptions Friday, giving him four in the Trojans’ final two ballgames. Junior free safety Patrick McDonel snagged the other in the third quarter when Valwood was threatening. A slew of JMA defensive players forced the Valiant fumbles. Junior defensive lineman Devin Kitchens notched the first one of the night with a sack-fumble about midway through the second quarter. Not only was it the first of the game, it was the first of three turnovers forced in the pre-halftime period alone.

“Being opportunistic is huge against a team like this because they can score so fast,” Mills added. “Anytime we can take the ball away from them and give it back to Amaad to run some clock is huge. Amaad and the offense are the best defense we have.”

The John Milledge defense stepped into the title game having given up only 51 points all season long. The 19 points surrendered to Valwood pushes that total to a nice round 70 for the entire season, which comes to allowing opponents just 5.4 points per game.

“I’m kind of hacked off with Coach Mills that we gave up 19 points — he’ll be in the sandpit on Monday,” Coach Wall said jokingly. “We’ve leaned on that defense all year long. The offense gets a lot of the praise and a lot of the limelight, but we lean on that defense.”

The heart and soul of not only that stout Trojan defense, but the entire football team is senior Justin Aldridge. He capped off his varsity football career with a smooth scoop-and-score that put the Trojans up 55-13 early in the fourth quarter.

“It means everything to me,” Aldridge said of winning Friday’s championship. “I give all the glory to God in this moment. We couldn’t do anything without Him. Our defense and our offense just played a heck of a game. The D-line did a great job working gaps and getting to the quarterback all night long. It was the best game we’ve had all year.”

He and his fellow four-year Trojans finish up having posted a 49-3 record with the program these last four seasons to go along with the two state titles.

Next season, Coach Wall and his staff will welcome back this year’s massive junior class that figures to once again make a run at the GISA’s biggest prize.