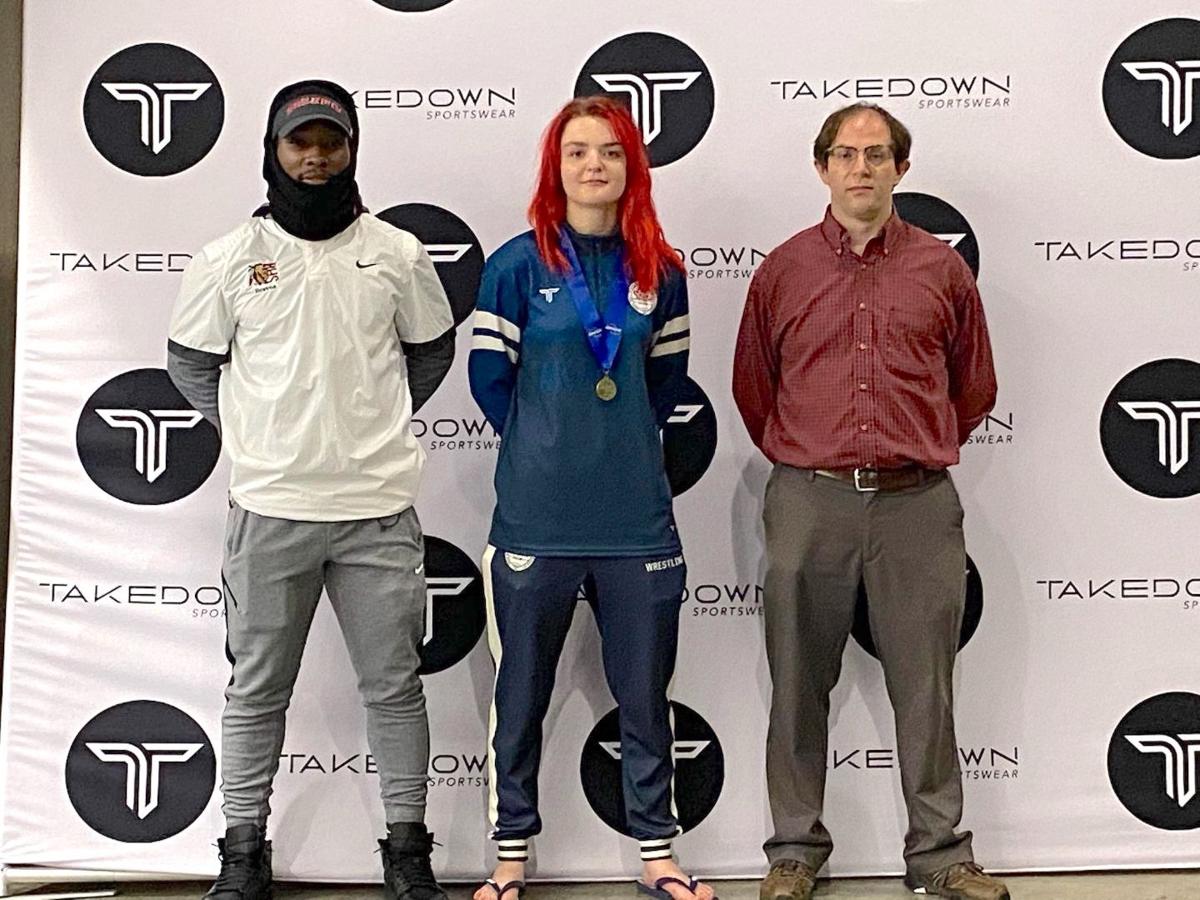 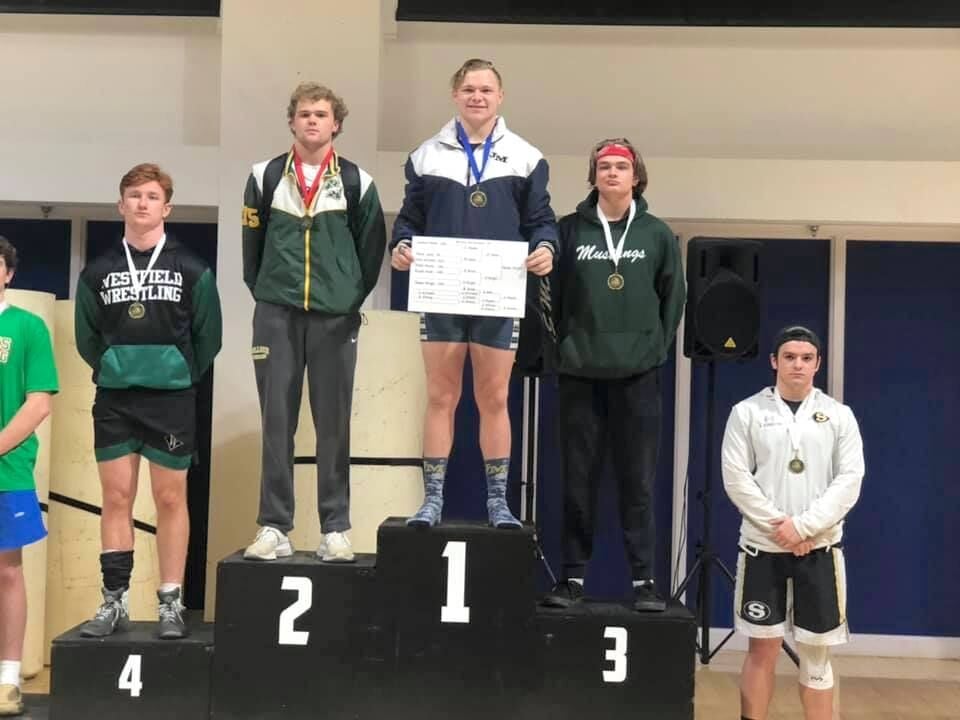 John Milledge junior Jayson Wright stands atop the podium with his medal and copy of the bracket he bested en route to a second consecutive state wrestling championship. 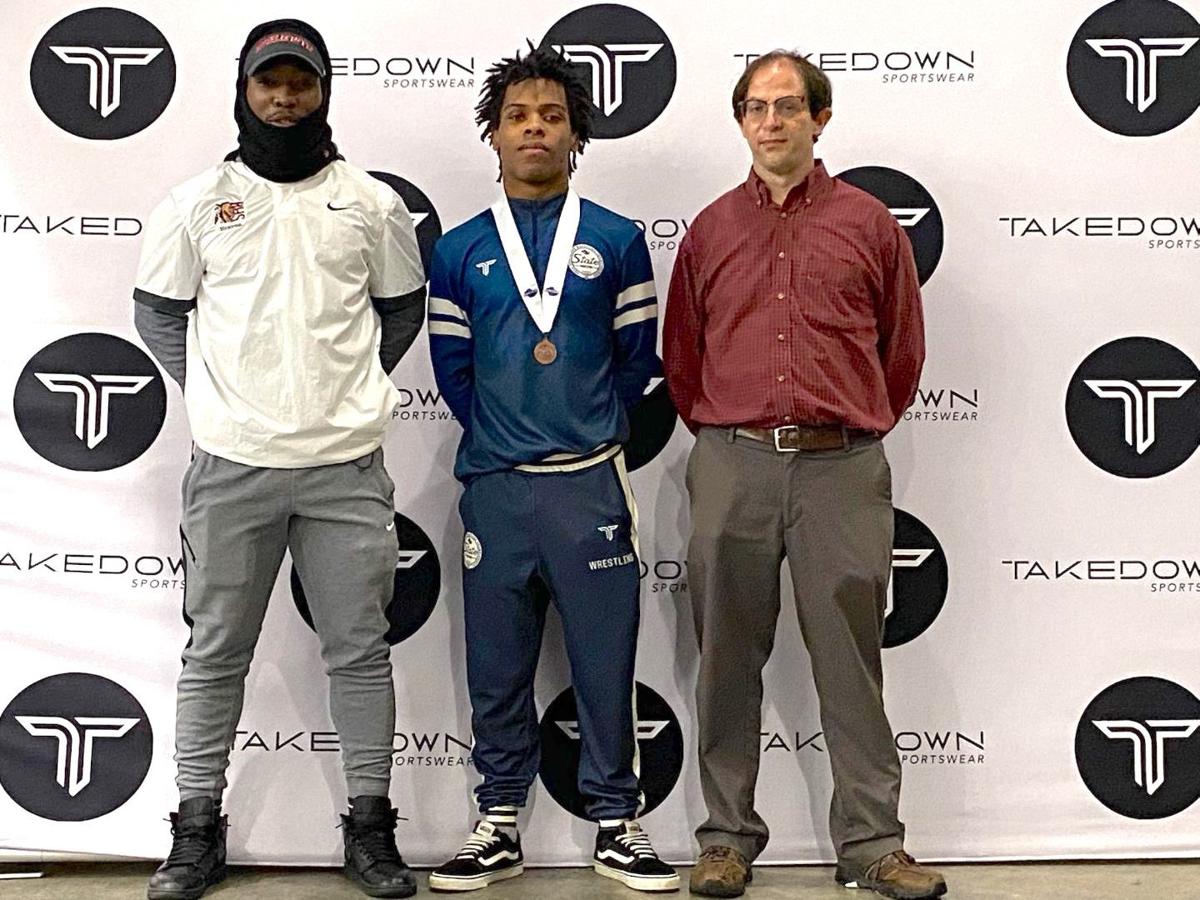 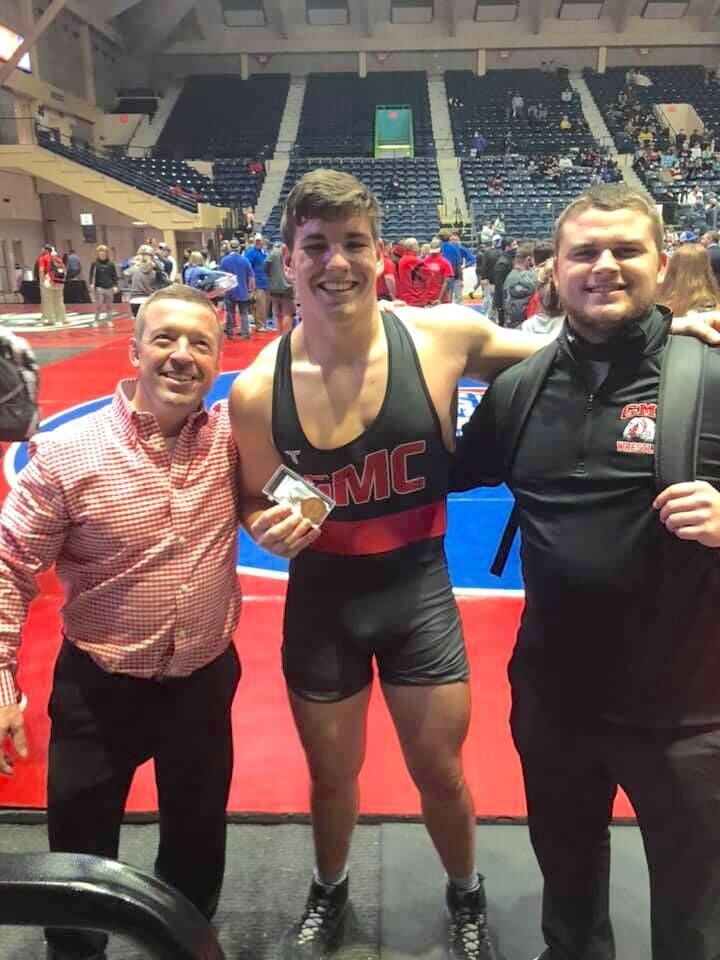 John Milledge junior Jayson Wright stands atop the podium with his medal and copy of the bracket he bested en route to a second consecutive state wrestling championship.

It was a first for Mullis as she finished her outstanding high school wrestling career on top while Wright was crowned the GISA 195-pound weight class champion for a second consecutive year. The JMA junior has many more state titles to his name, but more on that later.

This year marked only the third since the GHSA established girls state wrestling championships, and Mullis improved on her standing with every trip to the Macon Centreplex state competition site. She finished fourth as a sophomore before taking runner-up last year, leaving some unfinished business for her senior season. Mullis’ run through the bracket culminated in a last-second pin of her championship opponent, Genevieve An of Kennesaw Mountain High School.

“I feel very at peace with how it ended because I know that if I wouldn’t have gotten first I would have been mad about it for the rest of my life,” Mullis said. “Now I know I won’t have any regrets.”

There are no state classifications in GHSA girls wrestling, only weight classes. Mullis was the last girl standing at the end of the 132-pound girls competition.

The Baldwin High School senior wrestler made the road to the final look easy, pinning three out of her first four opponents. The fourth likely would have been a pin too, but a dietary snafu had the Baldwin standout at less than 100 percent in that match. Mullis overcame the obstacle to win her quarterfinal bout by decision before pinning her way to the title round where she met Kennesaw Mountain’s An. The challenger took an early lead via takedown, but a Mullis reversal tied things back up. That sequence repeated in the second period before the Baldwin standout began taking charge.

“I basically just wore her down from there and was able to get the pin in the last three seconds of the match,” said Mullis, who was up 9-4. “I would have won either way, but it was nice to end it with a pin.”

That brought Mullis’ high school career to the best possible end as she’s the first Baldwin female to win a state championship and join the team’s 100-win club, a milestone she reached back in December. She plans on taking her talents to the next level as she has committed to wrestle at Life University in Marietta.

Over at the GISA’s state wrestling competition held in Americus, John Milledge’s Wright found himself in familiar territory standing atop the podium as he’s now a back-to-back state champion. Even more impressive is the fact that this was his fifth state championship earned with the school over the last two years. Wright was an integral part of the Trojan defensive line in the 2019 and ’20 seasons where the program won state championships, and last year he was also a member of JMA’s one-act play group that won first place at state. Those team championships are fun, but Wright says earning something to call his own is pretty great too.

“It was one of the best feelings ever,” the junior said of winning state over the weekend. “To me, it’s even better than going back-to-back in football because I know I put all the hard work in myself and can take all the credit for this one.”

Like Mullis, Wright had his own hurdle to face in his fight to get to the title round. The championship was split up over a couple of days, first, there was sectional qualifying before the state bracket.

“I was a little rusty going into the sectional tournament,” said Wright. “We hadn’t wrestled in two weeks because of COVID.”

Still, the now two-time champ found a way to win down 10-6 in the second period. A reversal of his Bulloch Academy opponent put Wright in position to pin and advance through the sectional. That same foe earned a second shot at Wright with the state championship on the line. The John Milledge wrestler left no doubt as to who the champion would be, getting the pin at 27 seconds.

Wright’s title was the culmination of a grueling season featuring early morning practices and weekly trips to Perry for private wrestling lessons. It has all paid off so far, and now the junior is looking ahead to next season where he hopes to put on some pounds and join the ranks of the heavyweights as he works towards a three-peat.

“If I stay on track like I have been, I think I have a pretty good chance,” Wright said. “It’ll be a challenge, but I’m ready for it.”

A couple of other local wrestlers fought their way through their respective brackets to earn impressive third-place finishes at the GHSA state championships. GMC Prep wrestler Hudson Caldwell, competing in the 195-pound weight class, got three straight pins to take third among Class A boys. Baldwin High junior Chavis Watson won some tough matches on his route to finishing third in Class 4A. Watson will be back again next season and could make a run at a state title.

Services for Denys Rae Anderson, 52, were private. Miss Anderson passed away on Feb. 19, 2021, at her residence. She was a native of Lakeland, Fla. and had made her home in Milledgeville for the past 18 months moving here from Asheville, N.C. She was a registered nurse and was employed by Av…

Funeral services for Mrs. Mary Agnes Doke Frazier will be conducted Friday, Feb. 26. 2021at 2 p.m. in Williams Funeral Home Chapel with Rev. Eddie Braswell officiating. Interment will be in the Georgia Veterans Memorial Cemetery in Milledgeville. The family will be at the funeral home on Thu…

Leman I "Rudy" Rudeseal died Monday, Feb. 15, at his home in Atlanta after a long illness. He was 97 years old. A memorial service and visitation will be held Saturday, Feb. 20 from noon to 2 p.m. at Community Baptist Church with The Rev. Chip Reeves officiating. Entombment will be at the Ge…

Mr. Wesley Pittman, 95, of Lakeside Drive, Milledgeville, died, Saturday, Feb. 6, 2021. He will be buried beside his late wife Rubye in a committal service at Davisboro Cemetery. A memorial service celebrating the lives of both Wesley and Rubye Pittman will be held on Saturday, Feb. 20, at 2…