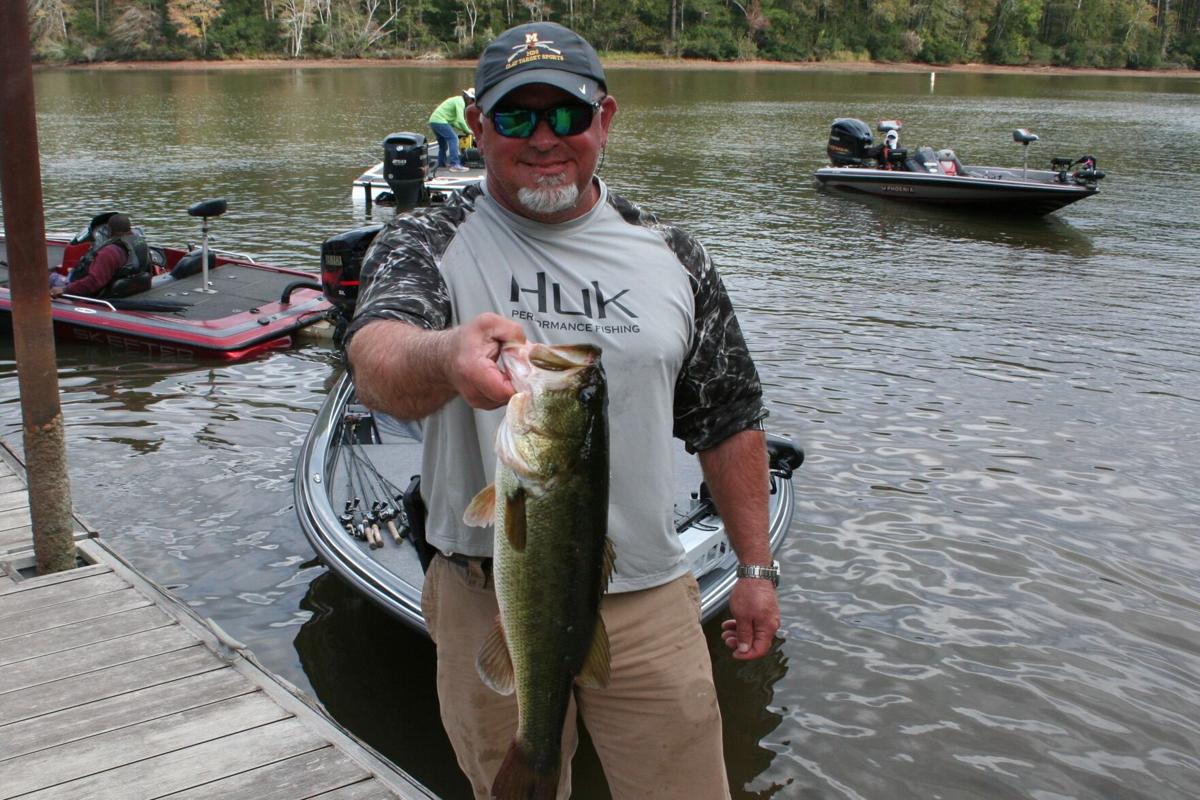 Pat Wallace caught the big fish weighing 5.12 pounds in the Casting in Pink tournament on Oct. 31. 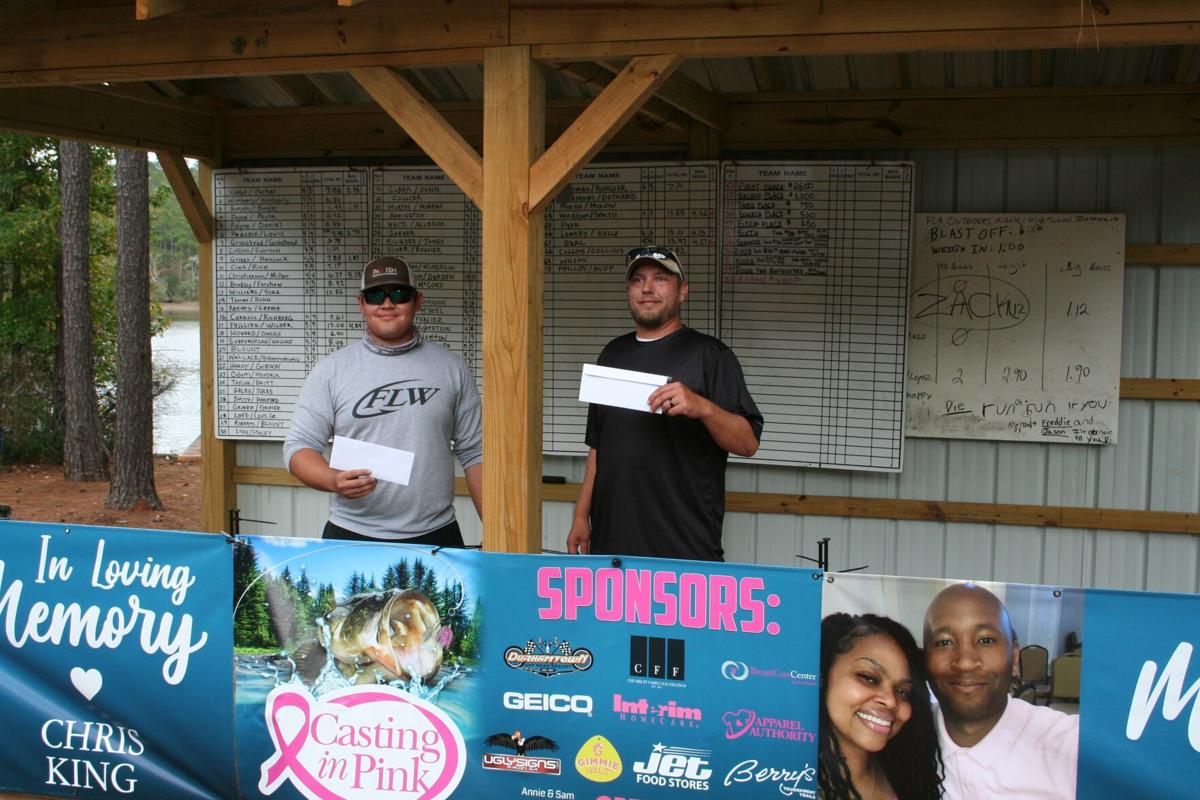 Spencer Sato and Daniel Tuten won first place in the Casting in Pink tournament on Oct. 31.

Pat Wallace caught the big fish weighing 5.12 pounds in the Casting in Pink tournament on Oct. 31.

Spencer Sato and Daniel Tuten won first place in the Casting in Pink tournament on Oct. 31.

On Saturday, Oct. 31, the first-ever Casting in Pink fishing tournament took place on Lake Sinclair at the Dennis Station Access. The tournament was presented by the United in Pink organization to increase awareness and get funding for programs that recognize the impact on spouses after a breast cancer diagnosis.

United in Pink was originally founded as Bunko for Breast Cancer in May 2005. It began as a fundraiser hosted by a local survivor, Sandy Union, as an outreach and token of appreciation to the caregivers and community that supported her battle with breast cancer.

In 2007, Bunko for Breast Cancer incorporated and became a 501C3 non-profit organization. In 2011, the organization changed its name to United in Pink. The mission focuses on survivorship and quality of life for families affected by a breast cancer diagnosis.

Laura Paxton, the organization’s executive director saw firsthand what impact cancer had on her mother, Sandy Union, and her family. Through that experience, Paxton and her family felt the urge to serve those with a similar diagnosis.

The Casting in Pink event began as a tribute to Ashley Wimberly by her husband Roy for initially surviving breast cancer after treatment. Unfortunately, before the originally planned event last spring could be held, Ashley’s cancer returned with a vengeance and at the age of 33, she lost her battle.

Another member of the Casting in Pink committee, Chris King, an avid fisherman, also saw his wife Chris survive her battle with breast cancer but he died in a tragic boating accident before the date of the originally scheduled tournament. The tournament last Saturday was held in Ashley Wimberly’s and Chris King’s memory.

The proceeds from the tournament, which brought in more than $20,000 will be used to provide physical, psychological, educational, financial and relational support to families like the Wimberlys and Kings throughout Central Georgia.

Seventy boats showed up last Saturday at the Dennis Station Access to compete in the Casting in Pink tournament. Anglers were faced with dropping water levels due to the Georgia Power drawdown but overall, it was an outstanding tournament. First place with 15.25 pounds went to the two-man team of Spencer Sato and Daniel Tuten and they took home $2,500.

Second place and $1,000 went to the team of Russel Phillips and Mike Wilder with 15.04 pounds. Rounding out the top three places were Pat Wallace and Bob Siebenmorgan with 14.32 pounds and they took home $750. The big fish of the tournament was caught by Pat Wallace. The fish weighed 5.12 pounds and Wallace got a check for $700.

The activities at Dennis Station Access last Saturday was very festive and very much a family affair. Drawing for all types of great prizes including two $500 cash prizes and a great meal of barbecue were provided to the large crowd in attendance. It was great to see families of all races come together for such a great cause. We should have more of these activities which I think would go far to change our local communities in very positive ways. Congratulations to the United in Pink for their great work.

See you next week.

Outdoors columnist Bobby Peoples can be reached at brpeoples995@gmail.com.

Harriett Register Braddy, 81, passed away Tuesday, Dec. 1, 2020. Services will be held at 2 p.m. Saturday, Dec. 5, at the chapel of Moores Funeral Home with the Rev. Doug Adkins. Mrs. Braddy was born July 1, 1939, in Laurens County, Georgia to Roy and Sara Garner Register. She was a graduate…

Timothy Roy Hancock was born Aug. 23, 1953, in Columbus, Ga. to William Roy and Martha Jones Hancock. He went home to be with the Lord Nov. 28, 2020, in Milledgeville. He was preceded in death by his father, William Roy Hancock of Milledgeville, as well as grandparents, aunts and uncles. He …

Clarence Earl "Chuck" Duke, III, 63, of Milledgeville, passed away Saturday, Nov. 28, 2020. Funeral services for Chuck Duke will be private. A native of Albany, Ga., Chuck was born on Dec. 10, 1956 to the late Clarence Earl Duke Jr. and to Bobbie Jean Ray Duke of Milledgeville. Chuck had liv…

John "Johnny" Sibley Weaver Jr., 64, passed away unexpectedly at his home on Nov. 21, 2020. Services will be private. He is predeceased by his parents, John Sibley Weaver Sr. and Patricia C. Weaver. He was born in Augsburg, Germany on Sept. 16, 1956. He graduated from Georgia Military Colleg…

Ralph Shurley West, 86, passed away Friday, Nov. 27, 2020. Graveside services were held at 11 a.m. Monday, Nov. 30, at Coopers Cemetery with the Rev. Randy Darnell officiating. Mr. West was born in Milledgeville on Feb. 9, 1934 to Howard I. and Vivian Wilkinson West. He worked with Belk for …