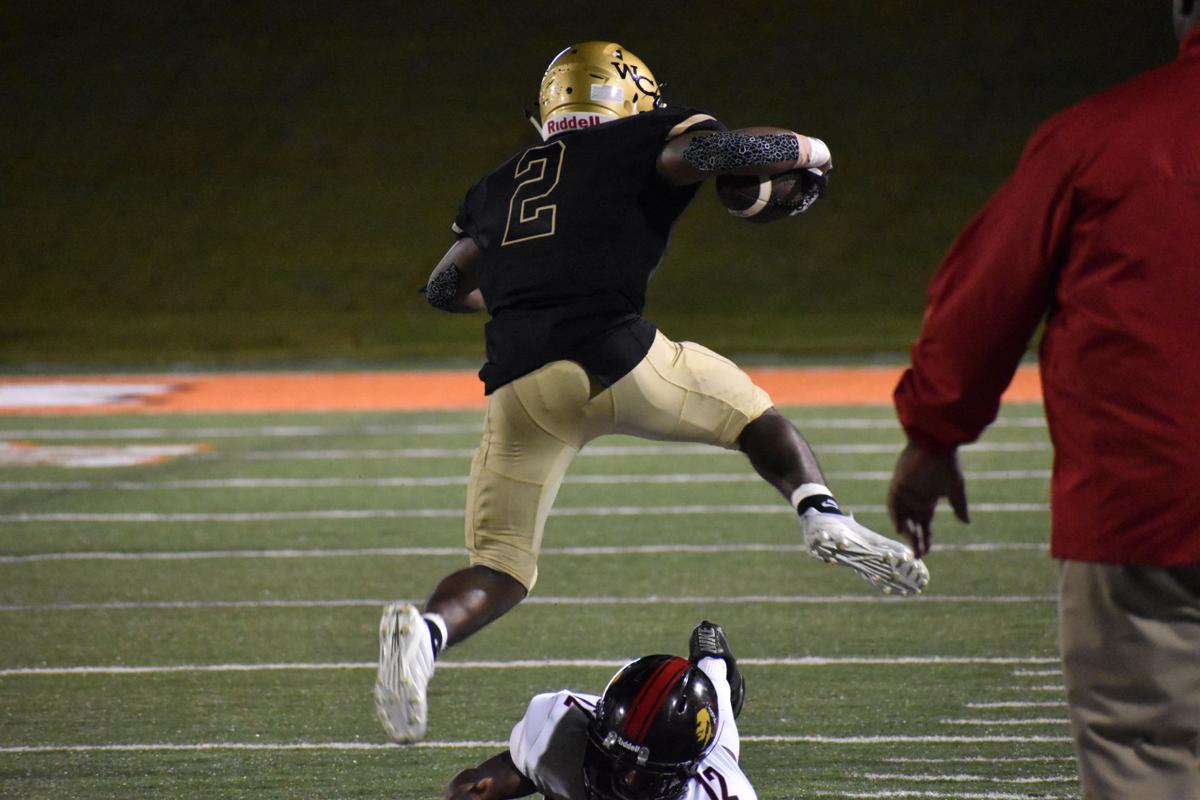 Washington County senior Sharmarcus Poole (2) leaps over a Baldwin defender after breaking a tackle. Poole finished with a pair of short rushing touchdowns in his team’s 42-7 romp over the Braves Saturday. 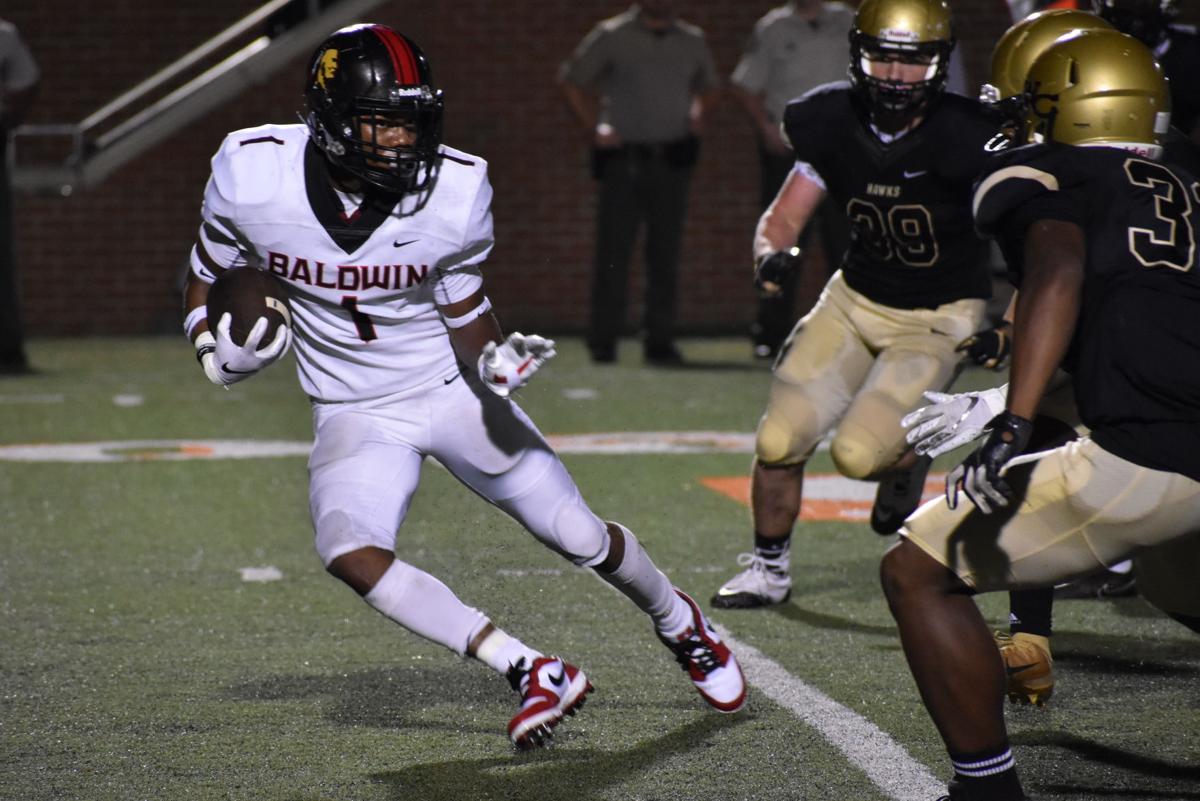 Washington County senior Sharmarcus Poole (2) leaps over a Baldwin defender after breaking a tackle. Poole finished with a pair of short rushing touchdowns in his team’s 42-7 romp over the Braves Saturday.

The Macon Touchdown Club’s Middle Georgia Kickoff Classic had scheduled Baldwin High and Washington County to meet inside Mercer University’s Five Star Stadium at 7:30 p.m. And meet they did, but not before lightning delayed the night’s first game between Westside and Southwest. The Baldwin Braves and WACO Golden Hawks would not kick off until 11 p.m., about an hour past the time high school football games normally end, and did not leave the field until after 1 a.m. Sunday morning.

The very late start did little to slow down the strategically-designed Washington County offense that took advantage of Baldwin’s young defense. The Golden Hawks out of Sandersville won the neutral site season opener in decisive fashion, 42-7.

Having lost nine defensive starters from a year ago, BHS head coach Jesse Hicks knew there would be an adjustment period for his team on that side of the football. He was hoping that his much more seasoned offense could keep up with opponents while the defense gained experience. Such was not the case Saturday as Baldwin’s lone touchdown came late in the fourth quarter when WACO already had the game well in hand.

“It was just bad football,” Hicks told The Union-Recorder early Sunday morning. “Right now, I’m a bad football coach. I don’t mind saying that. I prepared my kids the best I could. We did the things we thought we needed to do to get them prepared and we didn’t make plays. That’s one thing we’ve got to do. When you run into a football team like that who plays power football and you don’t tackle well, the other team’s going to run the ball well. That’s what they did tonight. We made so many mistakes offensively and defensively. It was just zero effort by the whole program and that can’t happen again. We’ve got to fix it.”

While the Braves looked bad, the Hawks appeared to be in near midseason form. They were gifted two points they would not need via safety less than a minute into the ballgame. WACO, who entered Saturday’s game ranked eighth in AA, went on to score three touchdowns before the period ended. Two of those TDs came thanks to the physical running style of senior Sharmarcus Poole who served as the centerpiece for a unique offensive scheme. The Hawks operate out of what is basically a zero quarterback system, opting instead to put two running backs behind center. Just before the snap, both would crouch down low behind their linemen and show their hands to the center, making it anyone’s guess as to where the football was going. The system proved to be effective pretty much all night long, especially in the first and third quarters where WACO scored 21 points apiece.

The Braves held the Hawks out of the end zone in the second quarter, but any hopes of a second half BHS comeback were extinguished soon after halftime. This time it was WACO junior Malyk Walker who did the damage as he streaked down the left sideline on an 81-yard touchdown run. He would strike again later in that same period, this time on a 42-yarder that ironically put his team up 42-0.

Coach Hicks used the Saturday season opener to further evaluate his two sophomore quarterbacks, Gerald Kilgore and Derrick Lewis. The lefty Kilgore got the start, but the two split snaps roughly 50-50. The Baldwin head coach said both were too inconsistent in leading the offense.

“It was nothing like last week,” he said referencing his team’s scrimmage at Dublin. “Last week was a lot better. We were clean and crisp. I don’t know if it was the venue or how late we played — I don’t know — there’s no excuse. We just didn’t play good football, and right now we’re not a good football team.”

One Brave who did have a good night was senior kicker/punter Lucas Webb. The two-time Region 3-4A Special Teams Player of the Year put a good foot into each of his six punts and both BHS kickoffs.

The Hawks’ victory ups their record in the border rivalry with the Braves to 22-19-2.

BHS will look to regroup this week as they prepare for what should be another tough test in the Jones County Greyhounds while WACO is in for another road trip, this time to Jefferson County.

Larry "Ted" Brett, 67, of Milledgeville, passed away Thursday, Feb. 27, 2020. Funeral services for Ted Brett will be conducted Sunday, March 1, 2020, at 3 p.m. in Heritage Memorial Park with Jerry Brett and the Rev. Tim Oliver officiating. The family will receive friends at the Williams Fune…

Nancy Baker Pelham, 96, passed away Sunday, Feb. 23, 2020. Services will be held at 11 a.m. Wednesday, Feb. 26 at Sinclair Baptist Church with the Rev. Ricky Stubbs officiating. Burial will follow at Washington Memorial Gardens. Mrs. Pelham was a native of Brownwood, Texas but had made her h…