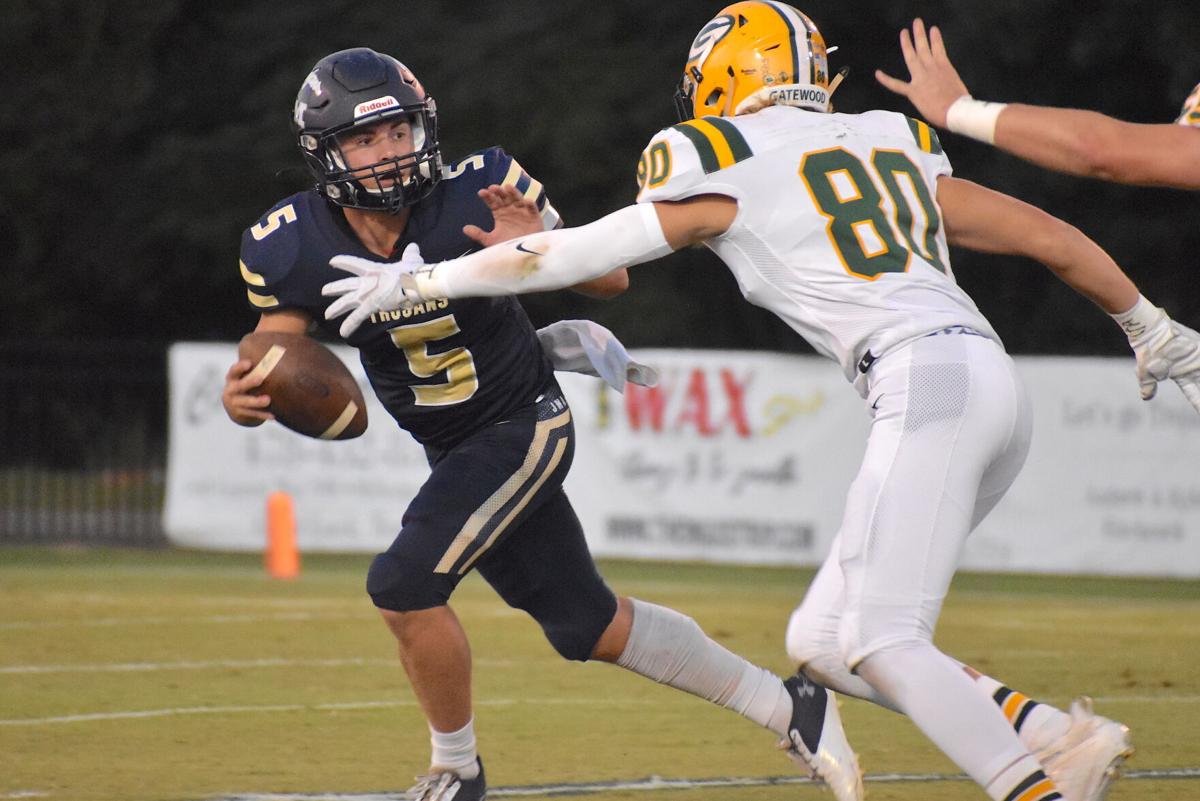 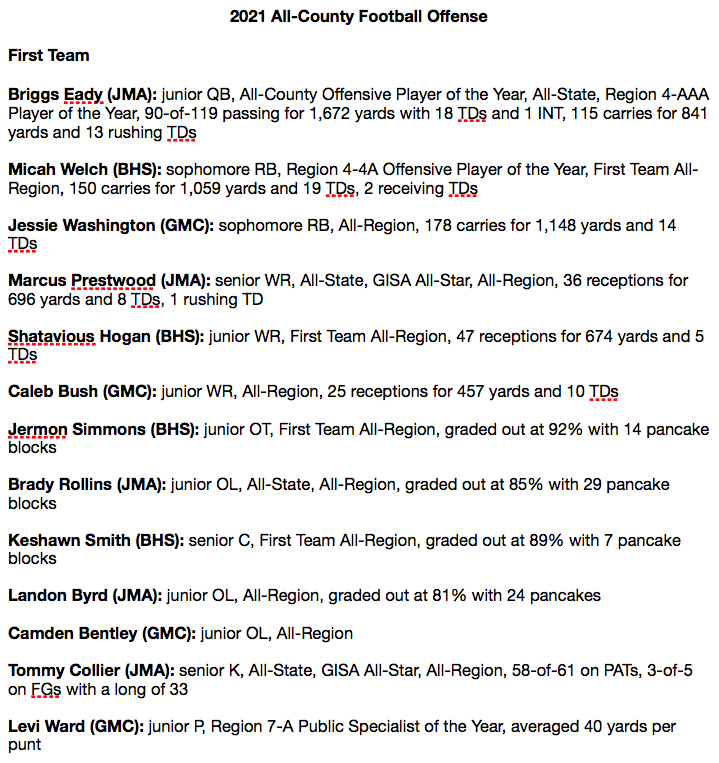 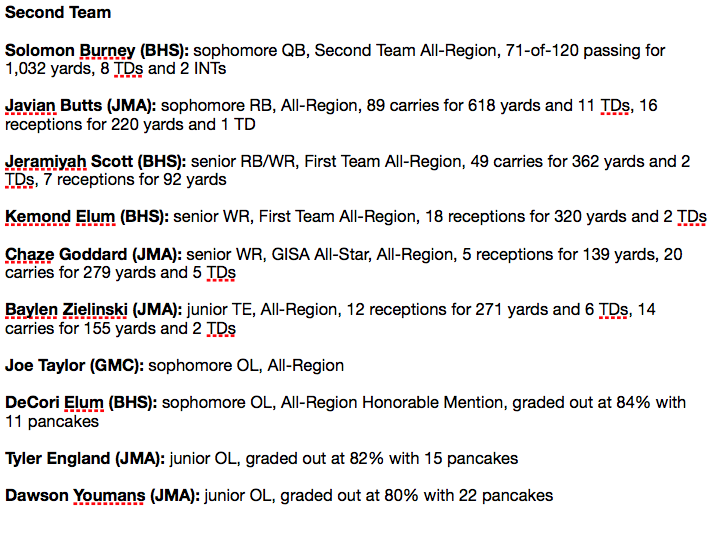 Briggs Eady faced a rather steep learning curve heading into his first year as a starting quarterback.

The John Milledge junior had sat behind older, more experienced players his first two years at the varsity level, but 2021 was his turn at the helm of what had been a potent offensive attack.

The thing about high school football rosters, though, is that they change from year to year. What worked in previous seasons may not in the next due to changes in personnel. Last year’s JMA football graduating class wiped out nearly the entire offensive starting lineup, leaving one senior wide receiver as the only returnee. No linemen. No quarterback with varsity starting experience. Just one skill player.

This year’s smaller, quicker expected first string had head coach JT Wall exploring a scheme change from his previously successful “line up and run straight at you” ways.

“We knew that if we ran the same thing we’ve run since I’ve been here we would have the potential to be successful, we just didn’t know if we could win the whole thing by doing that,” Wall said.

Veteran coaching assistant Jim Avera, new to JMA in 2021, helped greatly with the transition to a spread look. The Trojans were going to use their speed to get to the edges and misdirection to keep defenses guessing where the ball was going. But someone had to operate the new system.

In one way, the timing worked out nicely. If you want to change your offense, it’s probably best to do so when introducing a new starting signal-caller. But Eady’s head was still filled with the old playbook, thus the learning curve.

And so, the junior went to work.

“We’re not easy on our quarterbacks,” Wall said. “We ask for more from them than we do a lot of guys in our system because they need to be an extension of the offensive coordinator and head coach. Briggs did a great job of captaining the ship and knowing what we expected from an offensive mindset.”

To take Wall’s sailing metaphor further, the new-look 2021 Trojan offense encountered some unfavorable conditions when it first set out on this year’s voyage.

“Learning the new offense was really a challenge early on,” Eady said. “Coach Avera and Coach Wall spent a lot of time on Sundays helping us (Eady and his fellow QB Kolt McMichael) get used to it, which helped us a lot.”

The preseason scrimmages saw the unit take on some choppy seas, but Eady feels as though he had a good handle on the offense once regular season play began in late August. It showed in his 7-of-10, 158-yard, two-touchdown passing performance at Brentwood, a game the Trojans won 38-12. It showed again the following week when JMA hosted eventual state championship challenger Pinewood where the first-year starter had his first 200-yard, three-TD game through the air. He also rushed for 74 yards that night, which ended in a dominant 41-6 Trojan win.

Then came Savannah Christian, a private school that plays in the public school league. The Raiders were embarrassed by John Milledge in 2020, so they were out for revenge. They never got it. Whether running or throwing, Eady was on fire that night. The Trojan defense kept forcing turnovers, and the offense kept turning those extra possessions into points. All the while, the junior QB was becoming more and more comfortable making decisions in the new offense. On one occasion when he dropped back to pass down near the Savannah Christian goal line, the JMA O-line picked up a Raider blitz perfectly. The mass of bodies parted, much like the Red Sea did biblically, and Eady played the part of Moses as he moseyed on through for an easy touchdown run. The play may have looked like a simple scramble TD to most, but it really showed the new starter’s understanding of the game just three weeks into the regular season.

While the wins and touchdowns were piling up, one thing that often plagues inexperienced quarterbacks was missing. Eady had yet to throw an interception since taking the reins as the starter.

“It’s kind of like how you’re not supposed to talk about a no-hitter in baseball,” Wall said. “We just never mentioned it.”

That first pick almost never came, but fortunes were reversed when the Trojans faced Bulloch in the playoffs. Eady’s first completion to the other team came as a bit of a fluke. His pass attempt was tipped at the line of scrimmage, making it easy pickings for the opponent. It had no effect on the final score, though, and the QB says the experience helped him.

“It is what it is,” Eady said. “It helped me, actually. It kind of got that monkey off my back. I had been under-throwing because I was scared of getting that first pick.”

The Trojans famously cruised through the rest of the playoffs, including the state championship game against Pinewood where Eady pieced together another dazzling performance. He finished 11-of-14 throwing for 150 yards and one touchdown along with 135 yards rushing on 16 carries. The eventual All-State/Region Player of the Year had one rushing TD in that game too, and it was the one that slammed the door shut.

Up 14-0, the John Milledge defense had just kept Pinewood from pulling to within one score in the fourth quarter, and Eady and the offense took over at the plus-48 with 6:15 remaining. A few plays later, Coach Wall called the quarterback’s number and Eady served up a 39-yard TD run by weaving his way through the opposing defense. That made it 21-0 JMA, and the tally remained that way through the final horn’s sounding as the Trojans were crowned GISA AAA state champs in three-peat fashion. By season’s end, Eady had more than a handle on the new offense, he had to be considered its No. 1 threat.

With all that success now behind him his first year as a starter, Eady is looking to be even better come his senior campaign. He wants to improve as a leader and increase his understanding of the offense. Doing those things may pay off in a big way. Eady and his fellow four-year football Trojans have the opportunity to do something incredibly special, which is finish their varsity careers with a state championship sweep and a perfect record all through high school. It won’t be easy, as competition is expected to ramp up when some new opponents move into the league John Milledge has owned in recent years.

“It’s in your mind, definitely,” he said of the perfect record/state title sweep opportunity. “It wasn’t so much in my freshman and sophomore years because I wasn’t playing as much, but I definitely thought about it more before every game this year. We don’t really know what to expect next year with the new teams coming in, but I think we’ve got a good shot of doing it, to be honest.”

Clearly, Eady has faith that he and his teammates can keep the Trojan ship sailing smoothly in 2022. If so, he and John Milledge can lay claim to one of the most prestigious treasure troves in Georgia high school football history.