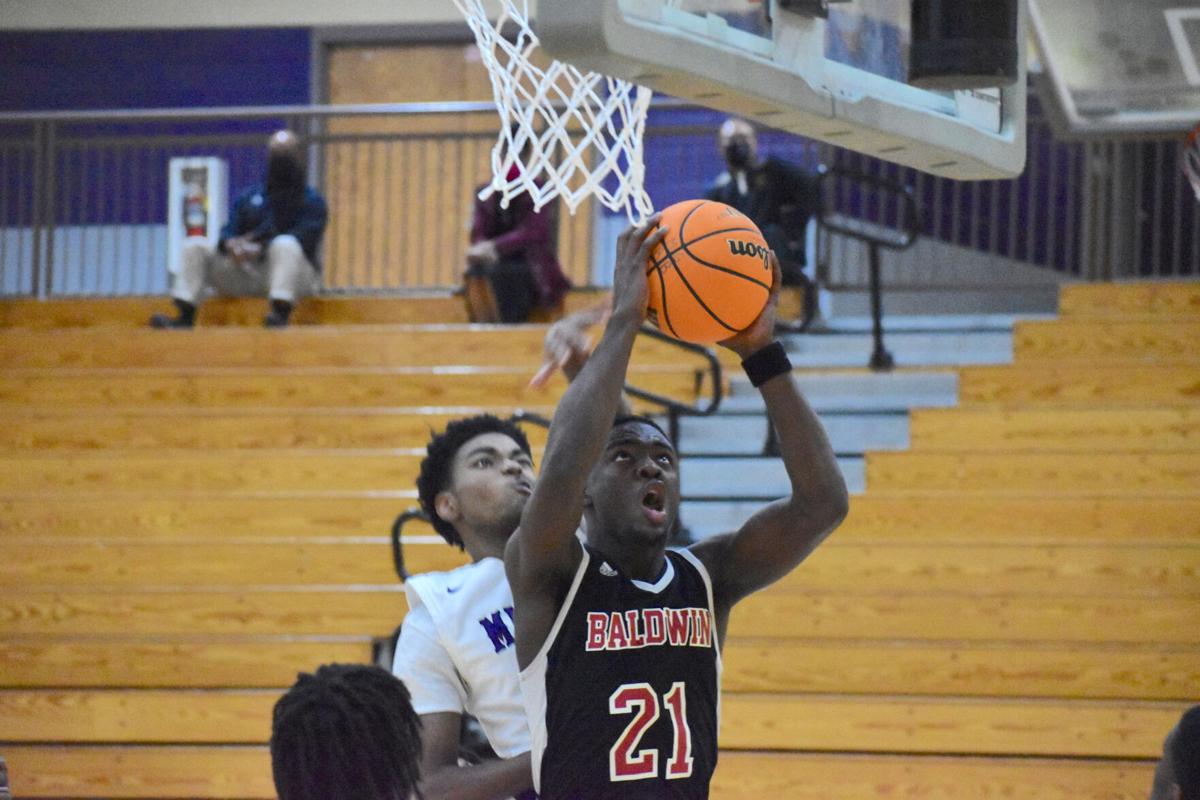 Sophomore Shatavious Hogan (21) goes up strong in the paint for one of his two three-point plays. 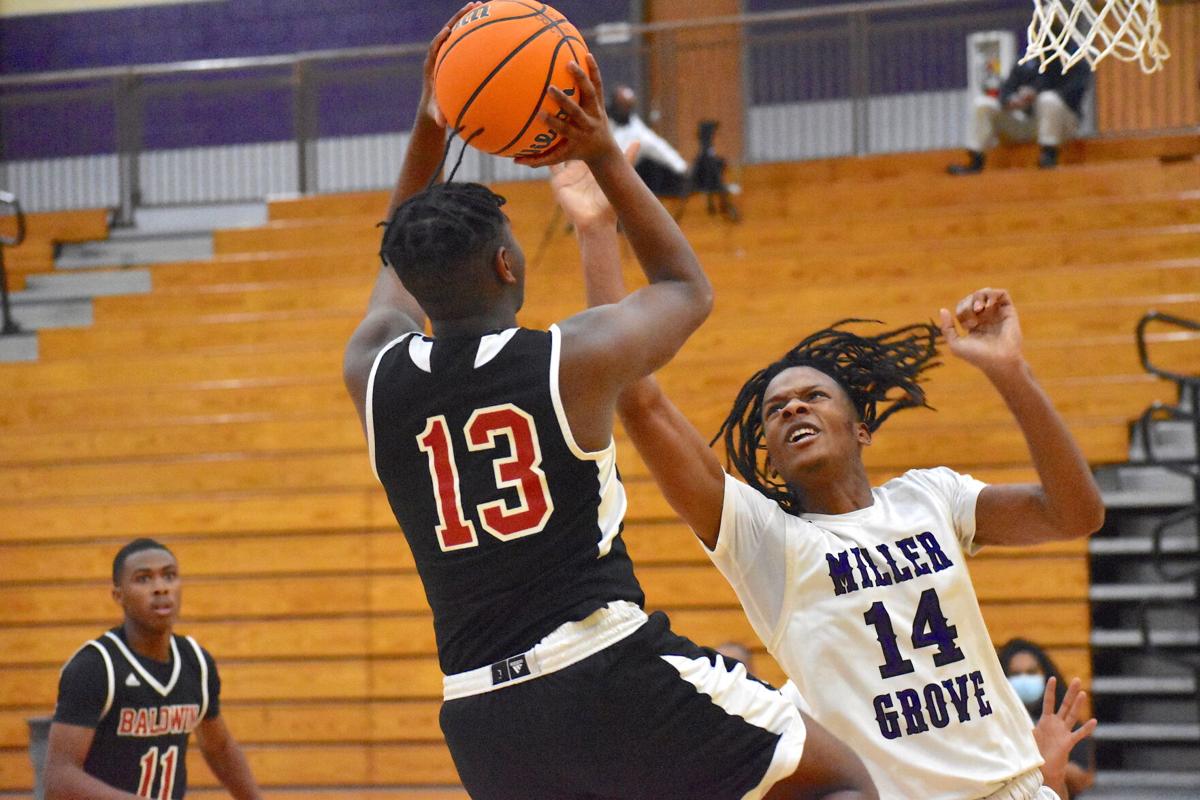 Baldwin senior Will Freeman (13) fades away from Miller Grove defender Jahmil Barber in the second half of Wednesday’s Elite Eight victory for the Braves.

Sophomore Shatavious Hogan (21) goes up strong in the paint for one of his two three-point plays.

Baldwin senior Will Freeman (13) fades away from Miller Grove defender Jahmil Barber in the second half of Wednesday’s Elite Eight victory for the Braves.

LITHONIA, Ga. — The Baldwin Braves took their unblemished record just east of Atlanta Wednesday, and left with it still so fresh and so clean.

The BHS boys (15-0) held off a late Miller Grove (16-5) surge to beat the Wolverines 58-52 and advance to the 4A Final Four. The Braves will make their second state semifinal appearance in the last four seasons, and first in head coach Anthony Webb’s two-year tenure.

“It feels great,” Webb said of reaching the semis. “I’m so proud of these kids. They work hard and do what they need to do. Our motto is to survive and advance, and they continue to do it.”

Both the Braves and the Wolverines entered the quarterfinal matchup as No. 1 seeds, but a GHSA coin flip dictated that the team in the bottom portion of the bracket, Miller Grove in this case, host. Wearing their road black uniforms for the first time this postseason, neither the giant Wolverine mural nor the home team’s seven boys basketball state championship banners on the gymnasium wall did anything to intimidate visiting Baldwin.

The two Elite Eight contenders spent Wednesday’s opening minutes feeling one another out. Baldwin’s offense was kickstarted by senior Will Freeman who was 2-of-3 from deep early. The lead then bounced back and forth until a Shatavious Hogan three-point play the hard way put the Braves up 11-8 heading into the second.

One thing that stood out in the Braves’ winning effort was how many different guys made plays at crucial points throughout the game. BHS offensively hit a rut through the first four minutes of the second quarter, that was until junior Lataeveon Roach came off the bench to provide the spark. He hit from deep twice in the span of about 10 seconds to put his team up seven, causing Miller Grove to call timeout three minutes before the half. If Roach was the spark, his classmate Jahzi Norman was the dynamite. Baldwin’s Freeman had the basketball down on the baseline where he was trapped by a pair of Wolverines around the 1:45 mark. Just when it looked like he was out of options, he passed the ball to the 6-4 Norman who streaked down the lane and unleashed an explosive one-handed dunk. Only 50 fans per team were permitted inside the Miller Grove’s gymnasium due to COVID restrictions, but Norman’s slam definitely had the Baldwin contingent making its presence known.

“That was big,” Webb said. “It kind of catapulted us going into the second half. That brought our energy level up, and that’s what we needed.”

More fuel was added to the flames in the opening half’s closing seconds. Down 22-16 with 3 ticks left, Miller Grove was inbounding on its own end of the floor looking for a late bucket to cut into Baldwin’s lead. The exact opposite happened though, as Freeman stole the inbounds pass and drained a three from well beyond the arc to put his team up nine heading into the break.

The third quarter mostly belonged to the Braves. And-one’s by Hogan and senior Jermyus Simmons helped push the Baldwin advantage to double digits. It got as high as 15 before the scoreboard read 44-33 BHS heading into the final period.

The host Wolverines came out of the locker room at halftime a little down and maybe a little surprised. That had washed away by the time the fourth quarter started as a real sense of urgency kicked in. They upped the pressure on defense and were more aggressive in getting to the basket those final eight minutes. Miller Grove senior guard tandem of Zyair Greene and Tyreik Boyd played like they were not ready to see their high school careers ended. Greene would finish with a game-high 20 points while Boyd put up 15. Their play got the Wolverines to within one point twice in the game’s final two minutes.

“We were able to hold them off,” Webb said. “We knew a run was coming. Miller Grove is a physical team, so I told the guys to just settle down and keep doing what they were doing.”

Miller Grove got a home roll on a free throw that set the score at 51-50 BHS with 1:19 to play. The Braves killed a little clock as the Wolverines opted to try and steal rather than foul. It was then that another Baldwin Brave stepped up. Jacobi Nixon, Cobi for short, did his best Kobe Bryant impression by facing his defender and pulling up just inside the top of the key. The ensuing swish gave the visitors a little more cushion.

“He told me he thought he could take his guy,” Webb said. “He found the opportunity and I didn’t have any gripes about it.”

Miller Grove turned its next possession over with about 30 seconds to play, and Baldwin closed out the game from the free-throw line, hitting five of its last six attempts as a team.

Freeman led the Braves with 16 points on 4-of-8 shooting from three and a perfect night from the charity stripe. Roach contributed 10 points off the bench and sophomore Rudolph Satcher had a huge 10 points as well, including one of those free throws late to push Baldwin’s lead to two possessions. His poise and quickness as a ball-handler while facing a much more experienced defender were also key in the Braves’ playoff win.

Baldwin’s Final Four opponent comes as a bit of a surprise. Albany school Monroe, who had an 18-4 record, and 17-9 McDonough were on the other side of the bracket, and McDonough pulled off a 29-25 victory in a game that was the opposite of a barn-burner. Since McDonough is a No. 2 seed, the Braves will be back on their home floor to host the semifinal Saturday at 7 p.m.