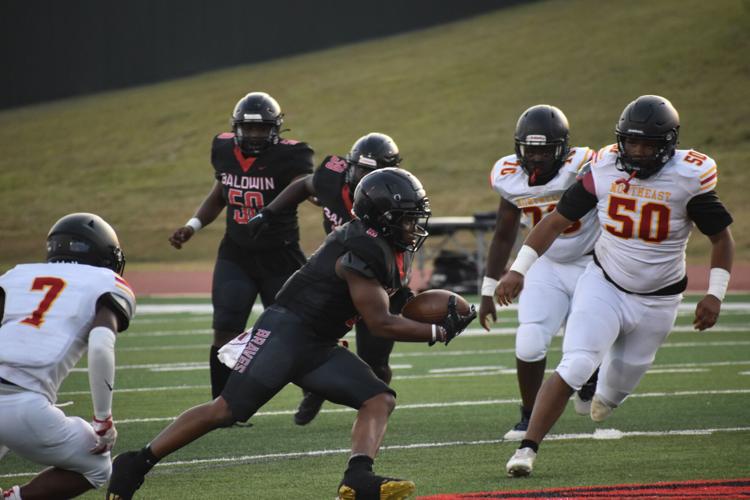 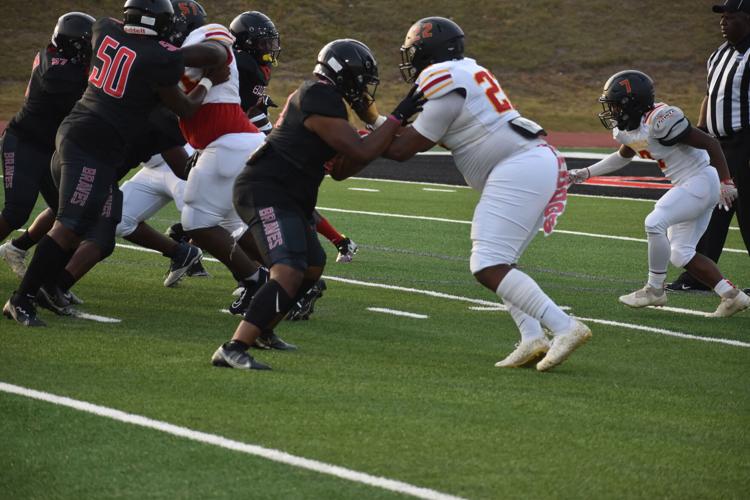 Linemen went at each other at full speed though nobody could tackle a quarterback in the Baldwin-Northeast scrimmage. 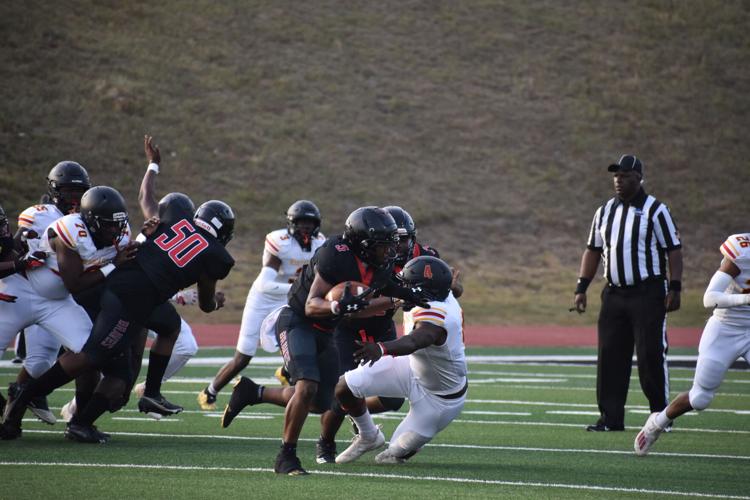 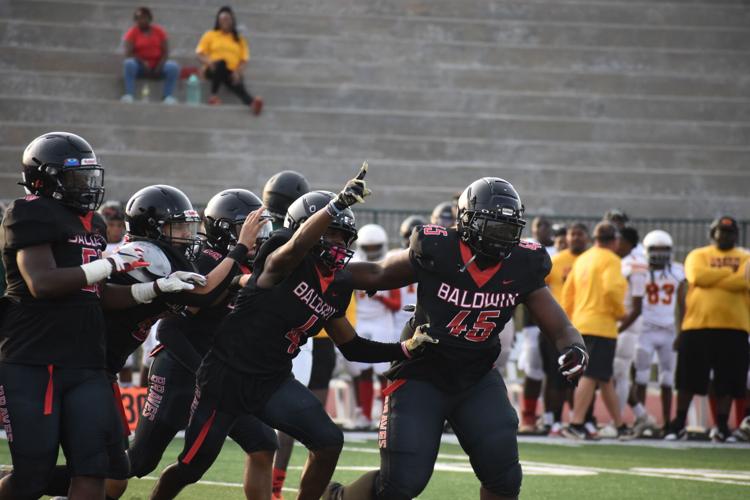 The Braves defense celebrates a turnover when the Northeast Raiders had penetrated the ‘red zone’ early in the second quarter of spring scrimmage action. 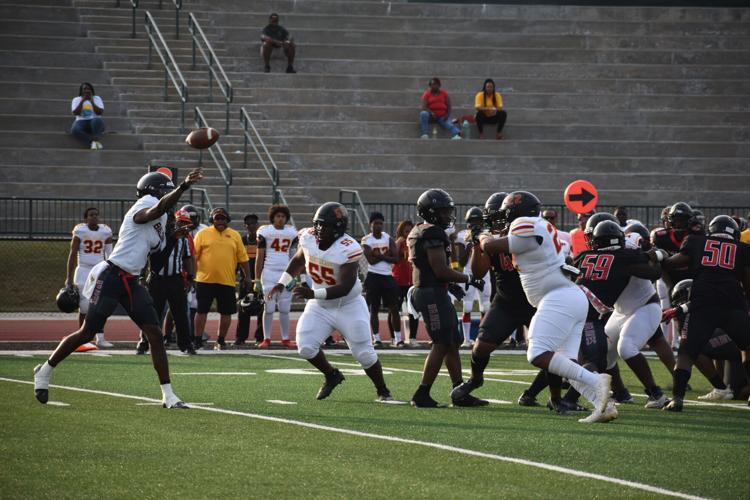 Solomon Burney unleashed a touchdown pass on just his second pass attempt getting Baldwin on the scoreboard and answering Northeast’s opening scoring drive. 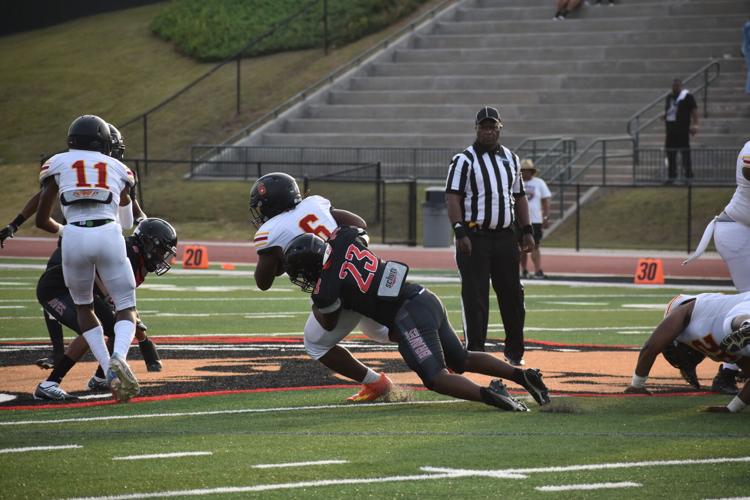 Linemen went at each other at full speed though nobody could tackle a quarterback in the Baldwin-Northeast scrimmage.

The Braves defense celebrates a turnover when the Northeast Raiders had penetrated the ‘red zone’ early in the second quarter of spring scrimmage action.

Solomon Burney unleashed a touchdown pass on just his second pass attempt getting Baldwin on the scoreboard and answering Northeast’s opening scoring drive.

But it has, and still all three of those elements are able to be a part of the 2022 Baldwin High football season. With so much of the yardage and scoring carrying over from one season to the next, it’s a great opportunity to swap places in the final region standings for 2-AAAA.

Baldwin head coach Jesse Hicks and staff concluded spring football practice with a controlled scrimmage game at Braves Field Friday. The opponent was Northeast High of Macon, which was coming off a strong 2021 season in Class AA. When it was all said and done, Baldwin won on the scoreboard 17-9, but it was more of a chance for Hicks to reflect on not just the game but of all the spring work getting ready for a new fall campaign.

“The big thing is we had about 43 freshmen,” said Hicks. “What we wanted to do was get them acclimated. We know what our upperclassmen can do. We just wanted to run some of our base stuff. See how good we were at that.

“I wasn’t happy with the way we played up front in the first half defensive line-wise. Some of those guys are some of our better players. But it’s been a while since we touched the field. Now we have the summer to get ready.”

There is a ‘3-headed monster’ anyone who followed Baldwin through a 6-4 2021 should know real well. The quarterback is Solomon Burney, who threw for eight touchdown passes and 984 yards. The running back is Micah Welch, who ran for 988 yards and 19 touchdowns and caught two other TD passes. The receiver is Shatavious Hogan, who caught 47 passes – five for touchdowns – for 674 yards.

“It’s crazy. We have a lot of guys coming back,” said Hicks. “We had a couple of injuries, not anything serious, but kept them out of the game. That’s the one thing you want to do during the spring, keep everybody healthy.

“Defensively, we have to find some guys to play on the back end. It’s going to take the whole summer to get them ready.”

As for the playmakers and their development, nobody took any backward steps. Hogan is a rising senior and Welch is going into his junior season, and Hicks said both are highly recruited at the Division I level. Burney transferred into Baldwin last season as a sophomore and took control of the offense right away.

“The big thing has got to be, can you get your offensive line intact,” said Hicks.

Northeast brought quite an impressive offensive line and compact running back into Milledgeville and was as basic as could be running the football from its 25 yard line all the way to the end zone. There were five first downs picked up along the way, and that included a 3rd-and-5 conversion on a quarterback bootleg to the Baldwin 33.

The touchdown came at 4:34 of the 10-minute opening period, but the Raiders did not make the uncontested PAT kick.

From the Braves 29, Burney went up top to Hogan on a touchdown connection just three plays into the first home team series. Dyson Sallad kicked the extra point through, so Baldwin snuck ahead 7-6.

Hicks was still looking for a quick defensive stop, but instead saw Northeast do a quick dump off on 3rd-and-8 for a first down on the Raider 39. When the first period ended, the visitors had advanced to the BHS 16.

But to start the second period, the Raiders dropped the ball and Baldwin recovered.

Hogan’s juggling catch and run put the Braves at the Raider 36. Two runs by Welch penetrated the 'red zone’ up to the 17, but after a penalty Northeast equalled the turnover margin with an interception on the 26.

It was just 10 yards further upfield where a Raider punt fell. Welch found that ‘red zone’ territory again at the 18 and Sallad nailed a field goal of 34 yards with two minutes remaining in the first half.

Baldwin’s 2022 football season will have a slightly different look, Griffin in and Rutland out of the region. It was Perry whom the Braves tied for first place by record, but Perry had the head-to-head win and No. 1 state seed. Baldwin fell to LaGrange at home in the first round.

“June 6, we get at it,” said Hicks. “7:15 to 11:30 Monday through Thursday. Brand new turf. We can come out here and get work done. We have a bunch of camps, UGA. We’ll throw every Thursday with every team in this area. We have a busy summer; just have to keep grinding.”