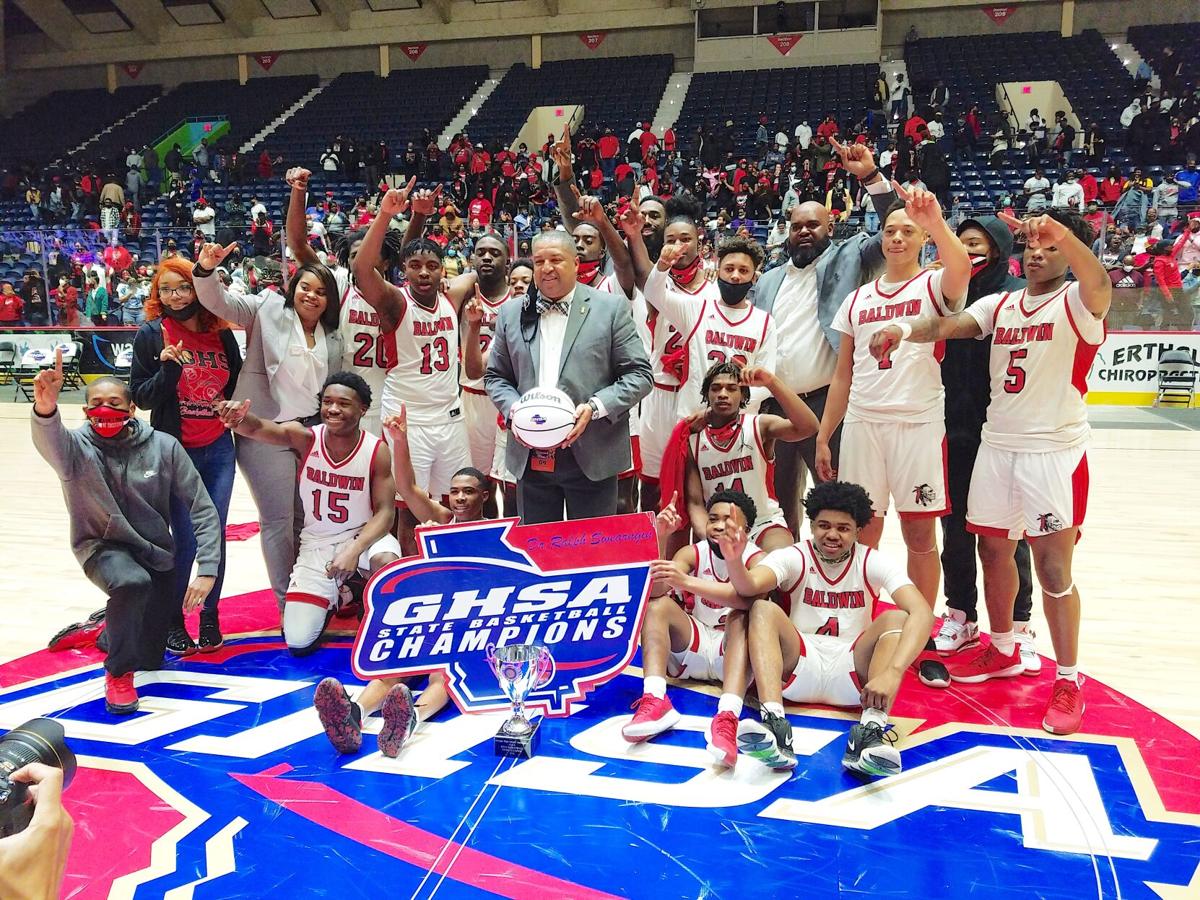 Baldwin players and coaches pose for the customary postgame trophy pic at halfcourt inside the Macon Coliseum Wednesday after the Braves beat Fayette County 54-53 to win the program's first state championship since 1981. 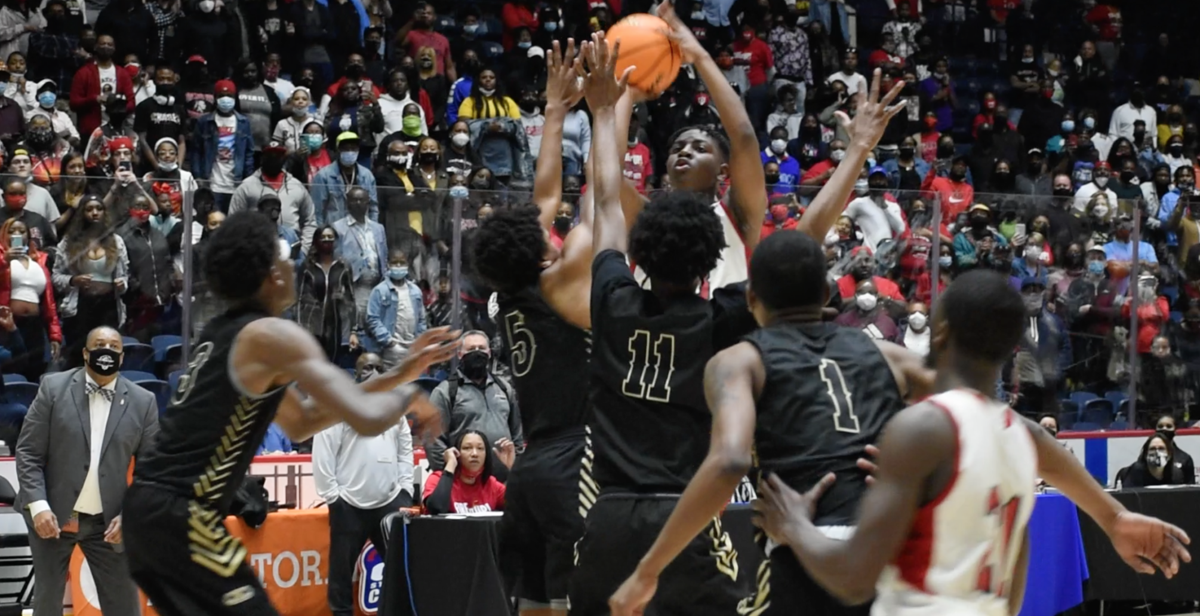 This is what Baldwin senior Will Freeman was facing when he made the game-winning shot. The ball bounced off the front of the rim, hit the back, and fell in to put the Braves up one with 3.8 seconds remaining.

Baldwin players and coaches pose for the customary postgame trophy pic at halfcourt inside the Macon Coliseum Wednesday after the Braves beat Fayette County 54-53 to win the program's first state championship since 1981.

This is what Baldwin senior Will Freeman was facing when he made the game-winning shot. The ball bounced off the front of the rim, hit the back, and fell in to put the Braves up one with 3.8 seconds remaining.

MACON, Ga. — Perfection is a rare thing, but many witnessed it inside the Macon Coliseum Wednesday.

The Baldwin Braves are the GHSA Class 4A state champions after completing an unblemished 17-0 season. Even the ending was perfect as they won 54-53 in the game’s final seconds.

Trailing championship challenger Fayette County (18-12 record) by one with 12 seconds to go, BHS head coach Anthony Webb went to his best player in Will Freeman. The senior accepted a pass from point guard Rudolph Satcher, took the space that was given him off a screen, and hit a highly-contested midrange jump shot to put his team up 54-53 with 3.8 seconds remaining. Fayette’s Division I prospect Kaleb Banks had a tough look himself with time expiring and nearly hit it, but ball met back iron instead of net and the Braves were crowned state champs.

It’s the first state title for Baldwin boys basketball since 1981 and the second in program history. James Lunsford, the man who Baldwin’s gymnasium and court are named for, was the head coach for that last championship victory, and he was assisted by James Little. Webb was joined on the 2020-21 coaching staff by assistants Nehemiah Ingram, Larry Turner and Jayla Waller.

After the game and some deserved celebration, the hero Freeman said he had a little help from a relative On High in making the game-winner.

“I prayed to my grandma,” he said. “She’s up there and she blessed me.

“I know I’ve got to cherish this moment. There’s not ever going to be another day like this. I love my teammates. I couldn’t do it without them.”

Wednesday was far from the first time Freeman came up big for the Braves this postseason. He had the go-ahead shot and game-clinching steal in the Sweet Sixteen, led the team in scoring in its Elite Eight road contest, and notched a steal late in Baldwin’s Final Four matchup to send the team to the championship.

“I told him we were going to ride with him and he came through every time,” Coach Webb said of the senior. “He’s our go-to guy and our leader. He may miss a few shots here and there, but he’ll come back and make a big one. That’s why I put the ball in his hands.”

While Freeman was there for the game’s biggest moment, he was forced to miss a lot of time due to being in foul trouble. Four Braves actually finished the game with three or more fouls, but no one fouled out. Freeman and the sophomore Satcher had 12 points apiece to pace the winning team, and junior Lataeveon Roach was huge off the Baldwin bench as he put up 11.

“A lot of teams haven’t seen him,” Webb said of Roach, who shot 5/9 on the night. “When he comes off the bench and starts making shots like that, most teams are like ‘Where’d he come from?’ He gave us good minutes when Will and Jermyus (Simmons) weren’t shooting the ball well, and we were able to sustain the lead with him out there.”

“He played a big role,” Freeman added. “I’m proud of him. He wasn’t nervous. He came out here and played his game.”

The Tigers of Fayette County weren’t exactly at full strength the full game either, but that wasn’t due to foul trouble. Their leading scorer Banks took a hit around his eyebrow just three minutes into the game and had to leave to get eight stitches, according to his head coach Andre Flynn. Banks returned after halftime and helped spark a Fayette comeback with a huge two-handed jam in the third quarter. He finished with eight points on 2/8 shooting.

“It probably would have been a different game if he had been in there the whole time, but you never can tell,” Webb said. “Kudos to his teammates because they kept them in the game while he was out.”

Flynn’s Tigers definitely had the upper hand early on. Their length defensively was giving Baldwin all kinds of problems. It was showing in the rebound totals as Fayette at one time had a 20-8 advantage in that crucial category. Further to their credit, they did not allow the Braves to play the style of basketball that got them to the title round.

“We’re an up-tempo team, and they forced us into playing a halfcourt game,” said Webb. “I told the guys that once we move the ball around two, three, four or five times you’re going to get good shots, you just gotta knock ‘em down. For a running team to be able to do that says a lot about us. We’re not one-dimensional.”

Neither team was able to get out and run with the basketball Wednesday. The fast-break points wound up just 2-2 at game’s end.

Fayette took a 13-12 lead into the second quarter, but Baldwin battled to eventually earn the game’s biggest advantage at 28-20 with about a minute to go before halftime. The Tigers got a huge three from Mumphrey to close the gap before going into the break down just 28-25.

The two finalists played to a 15-15 stalemate in the third, but Banks’ slam at the 2:45 mark helped his team find some momentum heading into the fourth. Two Tiger three-pointers put them up 47-43 with 6:36 to play, and that’s when Webb called a perfect timeout. It’s something he’s done many times throughout the 2021 postseason in an effort to keep his mostly-young team from getting rattled in big moments. The second-year Baldwin head coach credited his players for keeping their heads while facing adversity.

From that timeout until the final horn, Baldwin outscored Fayette 11-6 to claim the title. Satcher splashed home a three-pointer to bring BHS to within one with 5:45 left. Another pivotal sequence came three minutes later when the Braves were down 52-49. Junior Jahzi Norman hit a shot that closed the gap to one again, and that was followed by sophomore Jacobi Nixon’s biggest of his four blocks on the night, keeping the Tigers from re-widening their lead. Simmons was good on 1/2 free throws to tie things up 52-52, and Banks did the same on the other end to put his Tigers up one for a third time in the final frame. Just how close was the championship matchup? Fayette led for 15:04 of game time while the Braves were up for 14:41. The two teams were tied the remaining 2:15.

After Baldwin was whistled for a charge, the Tigers were sent to the line again up 53-52. Both freebies were missed, giving Freeman and the Braves the opening they needed to win the championship in the game’s waning seconds. The play “double high,” which was Webb’s call on the game-winning shot, is now immortalized in Baldwin basketball history.

Some numbers that stand out on the postgame stat sheet include BHS senior Myles Bolston’s five points as he hit Baldwin’s first bucket of the night. Simmons finished with eight points on 50% shooting, and sophomore Shatavious Hogan led the Braves in rebounding with six boards. Neither Kenneth Kelsey nor Jordan Webb got on the scoresheet, but both sophomores gave the team good minutes from their guard positions. Just like all season long, winning the 4A championship was a team effort for the Braves as eight different players scored against Fayette’s six. The all-important turnover battle also went Baldwin’s way, 19-10.

BHS will lose three seniors from this year’s team, but the 2021-22 squad will take the floor with a ton of big-game experience and — at the very least — a decent shot at earning repeat status.