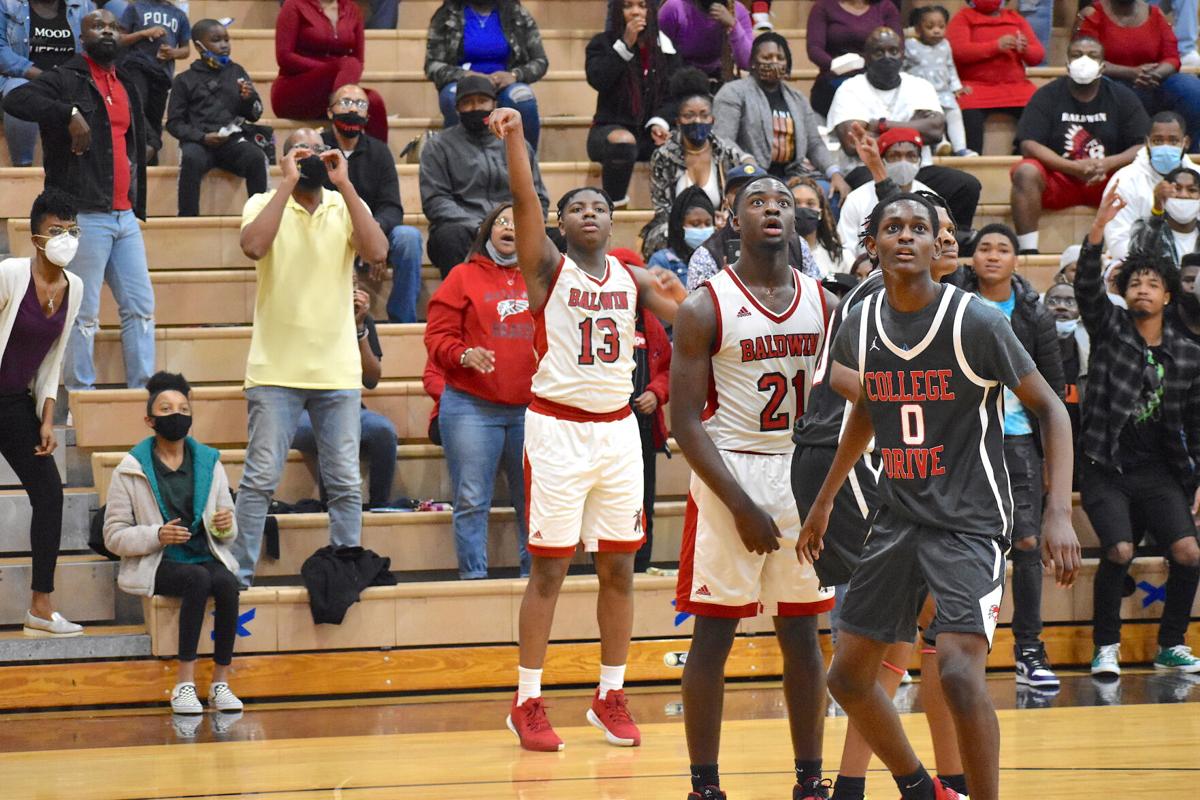 Baldwin senior Will Freeman (13) had been ice-cold from three throughout Friday’s playoff game against Hardaway. That changed on this shot that put his team up 44-42 with 1:25 left to play. 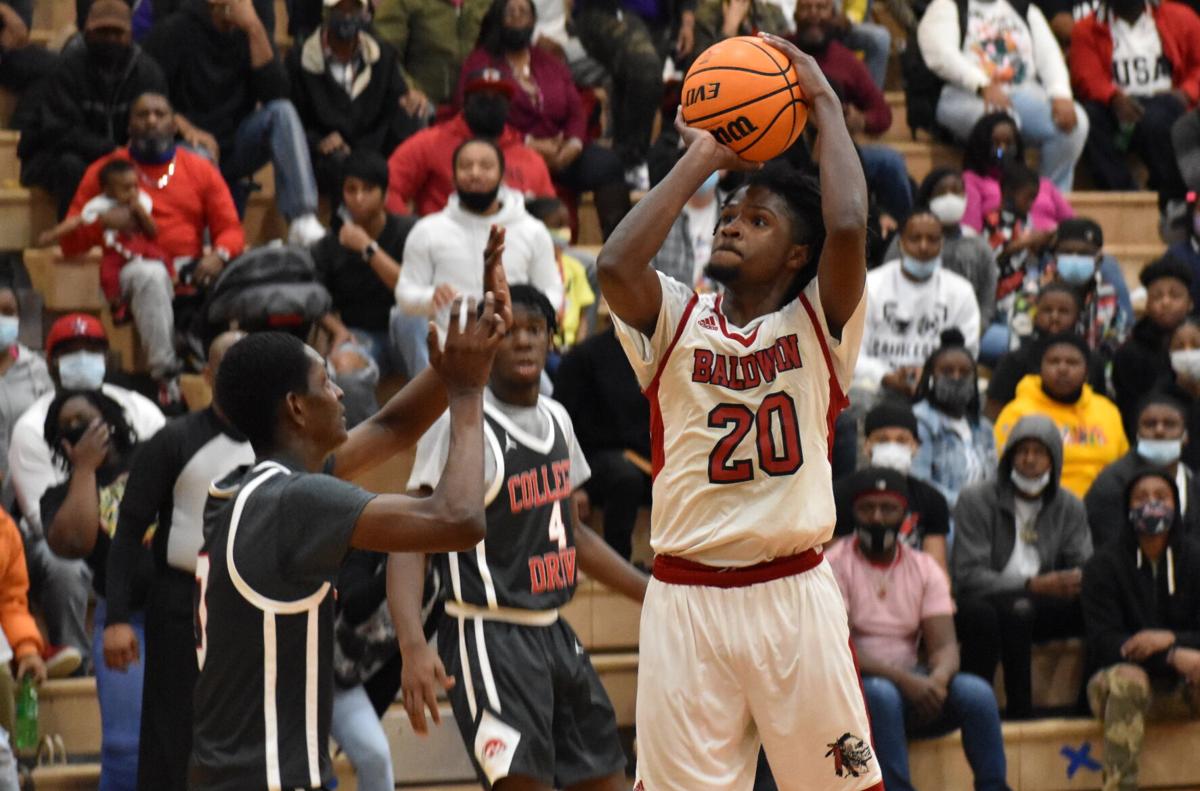 Sophomore Jacobi Nixon (20) was the Braves' offense early Friday as he had 12 of the team's 20 halftime points.

Baldwin senior Will Freeman (13) had been ice-cold from three throughout Friday’s playoff game against Hardaway. That changed on this shot that put his team up 44-42 with 1:25 left to play.

Sophomore Jacobi Nixon (20) was the Braves' offense early Friday as he had 12 of the team's 20 halftime points.

The Baldwin Braves (14-0) needed someone to test them, and that’s exactly what they got Friday when they hosted the Hardaway Hawks in the Class 4A Sweet Sixteen.

Struggling to piece together any offensive rhythm most of the game and down five with six minutes to play, the Braves found the answers and edged out a playoff victory over the Columbus school 46-44 to keep their perfect season alive. Baldwin now moves on to the Elite Eight where it will face whoever wins the Saturday meeting between Miller Grove and Luella.

Second-year BHS head coach Anthony Webb said the game added a few gray hairs to his head, but he was happy to see his guys show they could pull out a close one. Entering Friday’s contest, the undefeated Braves had been beating opponents by over 26 points per game. Their tightest margin was eight points on a couple of occasions this season before the second-round stress-inducer.

The Hardaway Hawks’ athleticism proved to be about dead even with that of the Braves, which isn’t something any BHS opponent has been able to say this year. The two playoff contenders were step-for-step with one another through halftime when the score stood at 20-20. Neither got ahead by more than four points in the opening half, and though the scoreboard wasn’t exactly lit up, a fair share of highlights kept the James A. Lunsford Gymnasium crowd heavily invested.

“There’s no doubt about that,” Coach Webb said. “A lot of times Jacobi is the one who gets us going.”

He set the tone by taking charges on Hardaway’s first two possessions, and offensively he was exactly what BHS needed nearly every time he touched the basketball. Nixon’s smooth finishes around the basket propelled him to 12 points by halftime. While the sophomore’s performance was outstanding, the home fans were eagerly looking for that big play to send them over the edge. They got one such opportunity about halfway through the second quarter when Shatavious Hogan, another sophomore, ran down a Hawk on a breakaway and sent his shot packing on a huge chase-down block. When he wasn’t blocking shots Hogan was out-leaping players taller than himself for crucial rebounds.

Not much changed after halftime score-wise, but one thing that did was Baldwin actually knocking down a couple of three-pointers, one by senior Jermyus Simmons and another by Hogan. The host Braves looked to be taking control with a five-point lead at 4:30 in the third, but Hardaway senior Tremaine Kynard got a trey of his own after a Hawk bucket to knot things back up at 31-31.

With neither team taking charge, drama continued to build as the game entered the final quarter. The visitors from Columbus gained their own five-point advantage, but that gap closed as well. Regardless, the Hawks were up 42-41 with less than two minutes to play putting the entire gymnasium on edge. BHS senior Will Freeman had been ice-cold throughout the ballgame. The normally sharp shooter was missing his three-point dagger despite the home fans’ best attempts at trying to lean them through the basket from their seats. Webb told Freeman, last year’s All-County Player of the Year, to forget about those clanks and keep shooting. The head coach’s belief paid off as he called the senior’s number on an inbounds play late.

“I called that play for him because he'd been missing,” said Webb. “He’s a senior and he’s a leader, so I still wanted to put the ball in his hands.”

Freeman got the ball in the right corner as designed and finally sent it through the net to put his team on top 44-42 with 1:25 to play. The Baldwin crowd had the moment it had been waiting for, and the Braves on the floor did as well. Up two with about a minute remaining, Freeman stole the basketball from a Hawk ball-handler and raced to the bucket. His contested layup missed, but Nixon was there for the cleanup effort to put BHS up four with :44 on the clock. A couple of Hardaway free throws and some killed clock later, the visitors had the ball down two with three seconds left inbounding under Baldwin’s basket. With a five-second whistle less than a second away, the ball was lobbed in to the block to Freeman’s man. The BHS senior came through in the clutch once again, poking the basketball away and running with it up the court until the final buzzer sounded. That’s how Baldwin advanced and ended Hardaway’s winning season.

Nixon’s early scoring helped him finish the night with 16 points while Hogan had 13 to lead the Braves on the scoresheet.

Baldwin gets to celebrate the dramatic victory over the weekend before looking ahead to either Luella or Miller Grove in the Elite Eight. The next round will be played either Tuesday or Wednesday, and the location depends on who wins between Miller Grove and Luella. A Miller Grove win puts the Braves on the road while a Luella win would keep BHS at home.