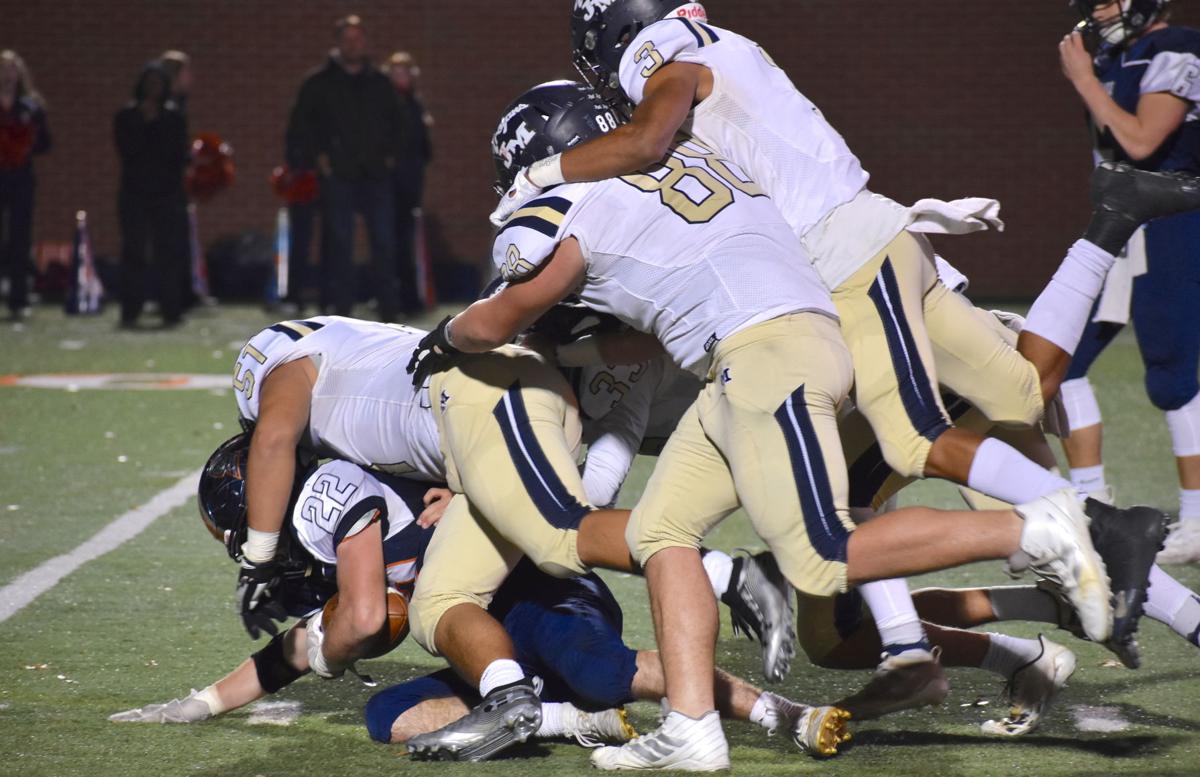 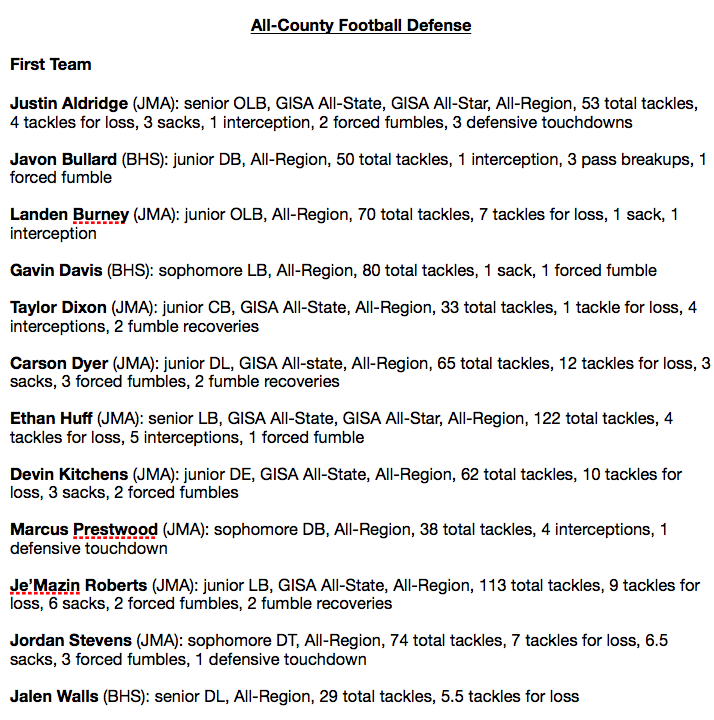 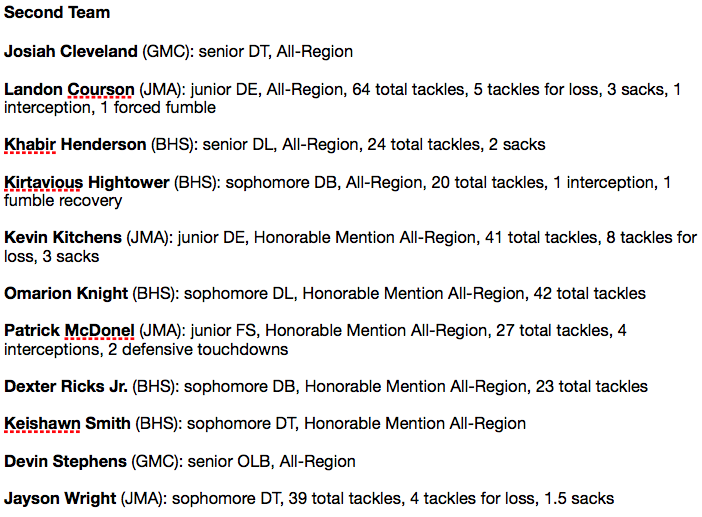 Football is a team sport, but that doesn’t stop fans and followers from getting wrapped up in the game’s superstars.

Whether a team is doing well or struggling, after a game or season there is always a mention of how its best player performed.

But what happens when a football team (its defense in particular) has multiple standouts at every level? The first result is, of course, that team winning a ton of ballgames, but who gets the credit? Does it belong to the big guys up front who unselfishly fill their gaps and responsibilities play in and play out? What about the linebackers who track down ballcarriers and are often a team’s leading tacklers? Or does it belong to the secondary, the unit that creates a no-fly zone against the pass while serving as the last line of defense versus the run?

For John Milledge Academy football this season, the answer was all the above. The Trojans under head coach JT Wall and defensive coordinator Justin Mills set a new bar for the program on their way to a perfect 13-0 season and GISA AAA state championship. They surrendered a cumulative 70 points all season long, which averages out to just 5.4 points per ballgame. The John Milledge defense pitched seven shutouts through the 2019 season, five of which came in consecutive fashion. In fact, the Trojans’ very first ballgame of the campaign came with a goose egg as they shut out the eventual GISA AA state champions and nearby rival Gatewood 37-0. Only three opponents reached the ‘teens in scoring, and one of those occasions came in the state championship game against Valwood on Dec. 6. The best team John Milledge faced all season long managed just 19 points on the night. To the Valiants’ credit, it’s tough to score when you give the ball away seven times throughout a ballgame.

“We had a lot of intelligent young men who were willing to work hard,” Mills said on what made the defense so special. “A lot of our guys were returners, so that contributed to our success a lot for sure. They enjoy learning new things and preparing for different teams. We had to prepare for a different scheme or look every week and they really enjoyed that aspect of it. They really embraced the challenge of being a good defense.”

“We always want 11 hats flying to the football,” Coach Wall said. “Once the play is blown dead, if we don’t have 11 guys there or on the way then something’s wrong, but there aren’t many plays where you’ll see that. Out-hustling somebody can win you a lot of ballgames, and it has for us the last couple years.”

As is the case pretty much every year in high school football, some holes and roles had to be filled at the start of the season. The Trojans lost two very good players from the previous year in twin linebackers Jacob and Jared Prestwood. The pair was tasked with leading the unit and knowing every players’ job on the field from the defensive tackles to the free safety. That burden fell to 2019 senior outside linebacker Justin Aldridge who credited his predecessors for showing him how to lead.

“I learned from the best,” said Aldridge, one of John Milledge’s six All-State defensive selections. “I watched how they spoke to the defense, how they called the huddle and how they ran everything. If I didn’t have them, it would have been a lot tougher this year.”

More on Mr. Aldridge later, but first, the Trojans’ success began along the defensive front, an area where Coach Mills returned a majority of his talent. Leading the way was the disruptive junior trio of Carson Dyer, Devin Kitchens and Kevin Kitchens. This group took a huge blow early when Kevin Kitchens went down with an injury forcing him to sit out a big chunk of the middle of the season. Dyer faced a similar fate later but was actually able to stay on and help his team in a more limited role. When together though, they wreaked havoc on opposing offenses. Aldridge and fellow outside linebacker Landen Burney were a semi-part of that defensive front as they lined up on the line of scrimmage most plays. Their job was to turn outside plays back in to the pursuing lineman and linebackers, and they carried out that duty to a T all season long.

Any ballcarrier lucky enough to break through the line of scrimmage and that ferocious front then had to run away from the two players who started the year as the JMA defense’s biggest question marks. Junior Je’Mazin Roberts, a transfer from Baldwin, had mostly been a defensive end in his football career but took on the role where his team needed him most as inside linebacker. He was joined in the middle by senior Ethan Huff, younger brother of The Union-Recorder 2016 All-County Defensive Player of the Year Dawson Huff. The younger Huff played football as a freshman but opted to remain off the field his sophomore and junior years before returning in 2019. Together Roberts and Huff combined for 235 tackles on the season and both were named All-State.

“Those were two huge questions that were answered,” said Mills. “They stepped up and really played well.”

One area where there were no questions about this past season’s Trojans was the defensive secondary, a unit that welcomed back all its starters from the prior year. Even when one of the secondary’s key players, free safety Patrick McDonel, broke his collarbone and missed some time, it still never allowed opposing wide receivers room to breathe. Sophomore corner Marcus Prestwood closed out the season with four interceptions in the team’s final two games, earning him one of two playoff performer awards given out by the coaching staff at the postseason banquet. At the other corner junior Taylor Dixon had the challenge of covering every opponent’s top wide receiving threat each week. Many plays where passes were thrown his way ended with both Dixon and the referee giving the incomplete signal.

While the stifling Trojan defense never had any catchy nickname like “Blue Crush” or “Coach Wall’s Trojan Wall” the players did have one thing that was unique to their program. Turnover chains and other rituals have become all the rage in college football in recent years. While John Milledge’s award does come as a chain, it’s meant to include defensive performance as a whole, not just for forcing turnovers. Theirs is called the Honey Badger Award with the words “Fight Back” displayed just below the ferocious animal. The honor was handed out by the defensive staff weekly to the player that gave the top performance. The defensive coordinator Mills went all National Geographic when looking for inspiration for the award.

“The honey badger is one of the toughest animals in the world,” he said. “It’s going to fight back no matter what.”

Players were given points for different statistics accrued throughout a game, and the player with the most points got to wear the chain around school the week leading up to the next Friday night matchup. The award results only further proved that the JMA defense was not held up by one superstar.

“It was a different player for the first eight weeks,” Mills said. “We could not believe it took that long for someone to get it a second time. It was defensive team effort all year long.”

The final Honey Badger Award went to senior captain and defensive MVP Justin Aldridge for his showing in the state championship game. What likely put him over the top was his scoop-and-score early in the fourth quarter. Valwood presented a look the Trojans had been working on all week long and both Aldridge and the inside linebacker Roberts made an adjustment that dealt yet another devastating blow to the reeling Valiants’ offense. Roberts rushed off the edge and knocked the ball loose, and Aldridge, not far behind, scooped the football up and ran into the endzone for his team’s penultimate score of the night.

“All I can remember thinking is, ‘Don’t get tackled by anybody on the 2-yard line.’ I had no idea that there was nobody behind me,” Aldridge said reflecting on the play.

The 70 total points given up by the Trojans this season set a new record for the program and gives the 2020 defense something to shoot for when it takes the field with nine out of 11 starters from the undefeated, championship-winning effort.