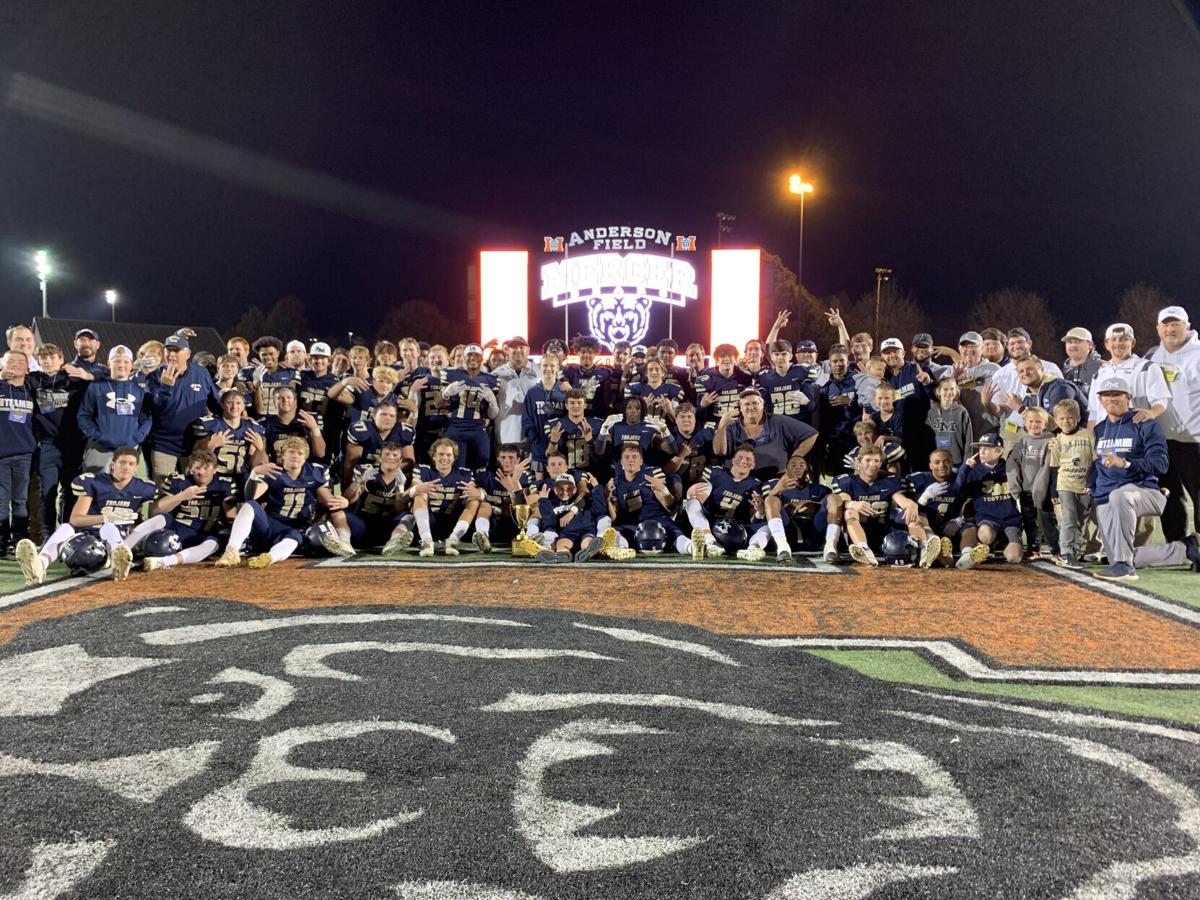 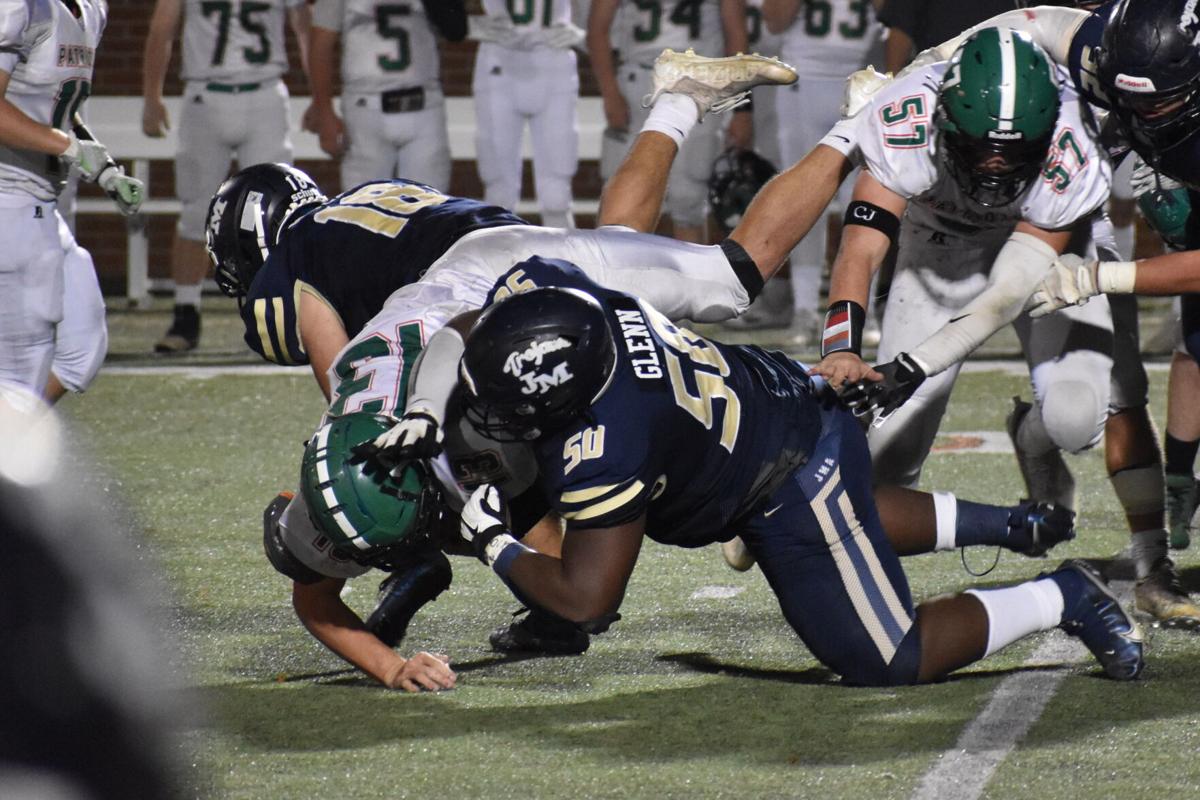 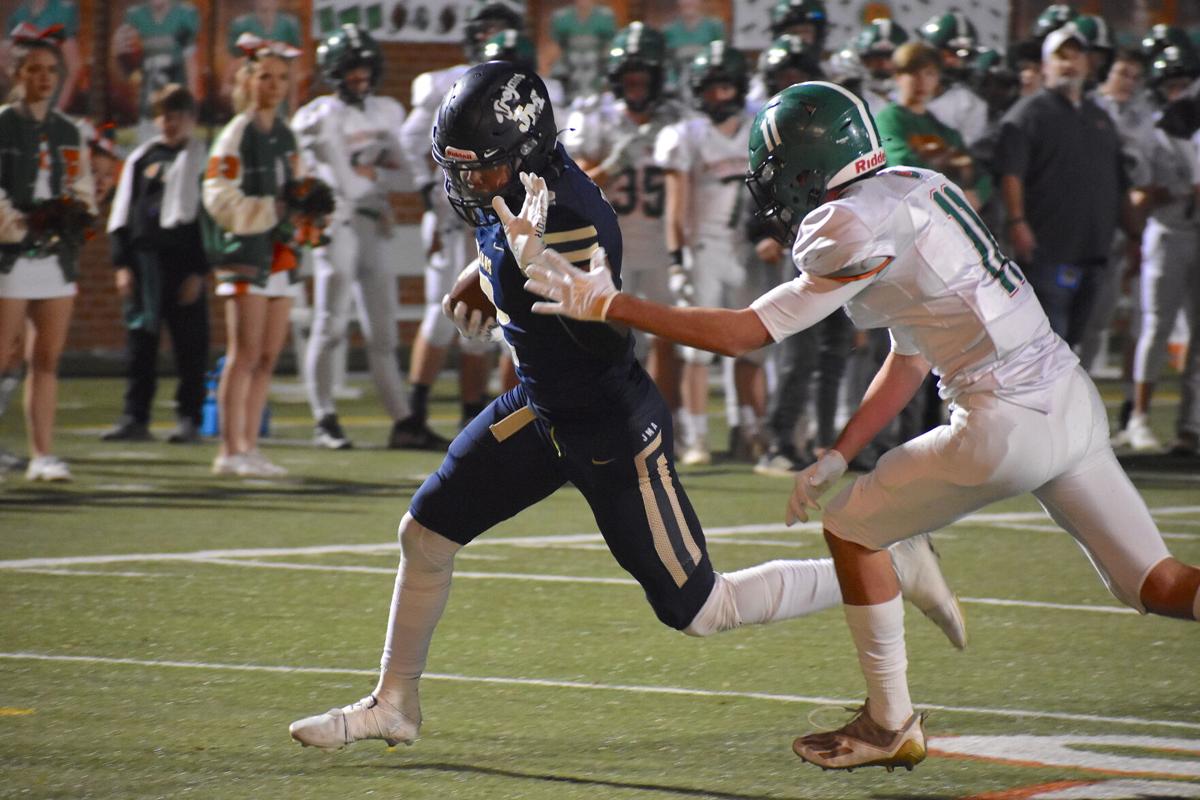 Junior Baylen Zielinski looks to swat the hand away of would-be Pinewood tackler Jade Bradley (11) in the first quarter of Friday’s state championship game. Zielinski scored both of the Trojans’ touchdowns early in the contest. 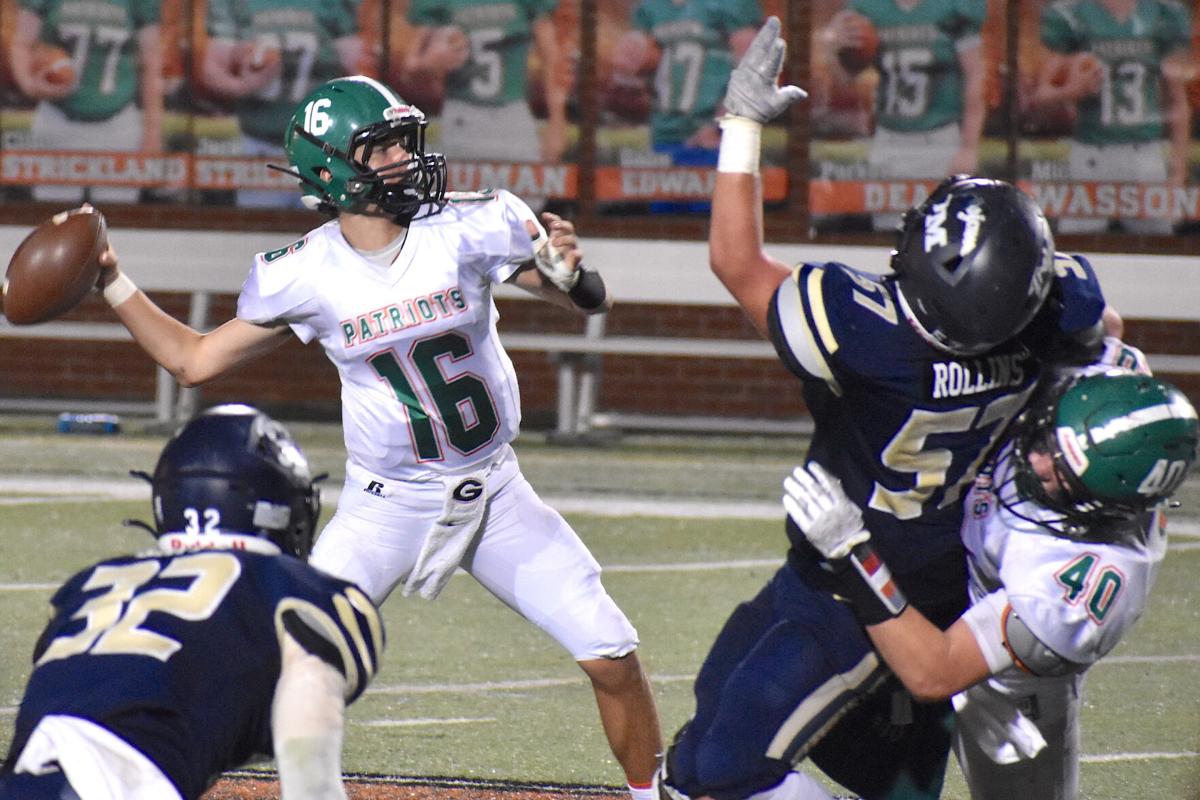 This play marked the beginning of the end of Pinewood’s upset bid. The ball was thrown for a touchdown, which would have made the score 14-7 JMA in the fourth quarter, but a holding penalty erased the score. The Patriots could do no more with the football from that point on.

Junior Baylen Zielinski looks to swat the hand away of would-be Pinewood tackler Jade Bradley (11) in the first quarter of Friday’s state championship game. Zielinski scored both of the Trojans’ touchdowns early in the contest.

This play marked the beginning of the end of Pinewood’s upset bid. The ball was thrown for a touchdown, which would have made the score 14-7 JMA in the fourth quarter, but a holding penalty erased the score. The Patriots could do no more with the football from that point on.

MACON, Ga. — Even with a rebuilt starting lineup, no one could touch the John Milledge Academy football team in 2021.

The Trojans (13-0) proved it again Friday night when they won their third consecutive GISA AAA state championship, shutting out challenger Pinewood Christian Academy 21-0 inside Mercer University’s Five Star Stadium. The victory marked John Milledge’s astounding 37th in a row dating back to the start of the 2019 season, and it’s now the program’s third straight perfect season ending in a title.

“I’m super proud of these guys to come out here and do this after graduating all those seniors we had last year,” Wall said, speaking about his over 20 seniors on last year’s squad. “I’m unbelievably proud of our guys’ leadership and the way they played out here tonight.”

Trojan fans were treated to a different type of game than they’re accustomed to as the Pinewood Patriots (11-2) put up the first four-quarter battle John Milledge has seen all year. Two touchdowns in the opening quarter — both by junior tight end Baylen Zielinski — put the favored Trojans in the driver’s seat, though. It was the fast, physical JMA defense that kept it that way.

“Pinewood had a really, really good team and a really good player at quarterback,” John Milledge defensive coordinator Justin Mills said. “We knew we had to fly around to the ball and be in the right places at the right times. It’s hard for offenses when we’ve got 11 guys flying to the ball like we do here at John Milledge. The only way to get a shutout is to execute and hustle, and we had those two things tonight.”

While the championship contest turned into a 48-minute battle, it started off like countless other JMA games in recent memory. The Trojans won the coin toss and chose to receive, as is customary for Wall’s team. That opening possession ended with a 14-yard touchdown run by Zielinski less than three minutes into play. Following a Pinewood three-and-out, the junior would reach paydirt again, this time on a 10-yard catch-and-run from classmate Briggs Eady. The score was already 14-0 John Milledge with still almost five minutes to go in the opening period.

Pinewood, meanwhile, wasn’t having any success against Mills’ defense. The Patriots’ best play call all night was simply snapping it to senior quarterback Mic Wasson who would then search for a hole a la Tim Tebow at Florida or Cam Newton at Auburn. The Trojans’ philosophy was bend, but don’t break, and also make the presumed All-State quarterback pay every time he carried the football.

“We’ve leaned on our defense for years around here,” added Wall. “I can’t say enough about the way they play and the way Coach Mills and his staff get these guys ready to play week in and week out.”

After cruising through those opening two possessions, the John Milledge offense began having its own troubles. The unit had four straight scoreless drives going into halftime, which likely hadn’t happened all year when the starters were still playing.

“[Pinewood] was giving us all kinds of fits after those first two possessions,” Wall said. “The negative play killed us. It was either a penalty or a sack. Every bad drive we had tonight had a negative play in it.”

But the important thing was keeping Pinewood off the scoreboard once the two-touchdown lead was established. Primetime performer Bud Veal did his part by snatching an interception early in the second quarter, and Pinewood would only punt the rest of the half.

The “bend, but don’t break” aspect of the JMA defense really came into play following the break. The Patriots had their deepest trip into Trojan territory the first possession, helped along by a roughing the passer penalty tacked on to a big pass play. The Bellville school got just outside the red zone, but was stopped there thanks to a sack split by defensive linemen Ameir Glenn and Brady Rollins that forced a turnover on downs. Pinewood’s next attempt ended via interception by JMA senior cornerback Marcus Prestwood, which set the top-ranked Trojans up at their own 31.

The Trojans smelled a little blood in the water at that point. They drove down to the Patriot 2 where Eady handed off to receiver Jalan Butts on a sweep. The football came out as Butts reached across the goal line, and even though it looked as though he was already down, officials ruled it a fumble recovered by Pinewood with 10:38 to go in the game.

Still down 14-0, the Patriots turned in another long drive. Facing third-and-16 at the JMA 36, Pinewood inserted Banks Booth at quarterback, something it did often throughout the night to move Wasson around the field. Booth flung a pass deep down the middle to sophomore wideout Kaedan Arnold, and Arnold hauled it in for a touchdown behind two Trojans. But there was a flag down on the field. A member of the Pinewood offensive line was whistled for holding as he had John Milledge’s Rollins in a grapple that’s only legal inside a wrestling ring. The Patriots could do nothing with their next play, and felt forced to punt the football away facing fourth down and very long.

With 6:15 remaining in the fourth, there was definitely blood in the water. Eady at QB provided the backbreaker with a 39-yard touchdown run that brought the game to its final tally with 5:20 left. The Trojan defense continued to hold up its end of the bargain to lock up the program’s second state championship game shutout in three seasons.

Not everyone believed John Milledge football would continue its dominance over GISA football in ’21. It’s hard to expect that when you lose so many seniors to graduation, but this year’s Trojans were more than up to the challenge. They outscored opponents 516-77 this season and pitched four shutouts. Wall’s seniors who have played all four years certainly have something to be proud of as well. They closed out their high school football careers with three state championships and a 49-1 record overall, the only loss having come in the 2018 state title game against Frederica.

The program may have doubters again in 2022 as 10 private schools have declared they are moving from the Georgia High School Association — the state’s predominantly public school league — to the GISA next year. Those who are returning will find a John Milledge football team that is very different from the one they remember.