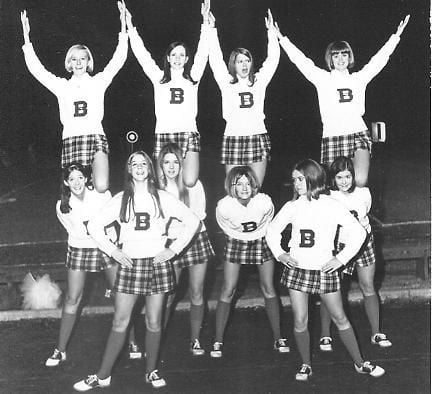 Mary Teague Royal (second row, far left) was a co-captain of the Baldwin High cheerleaders in 1970. 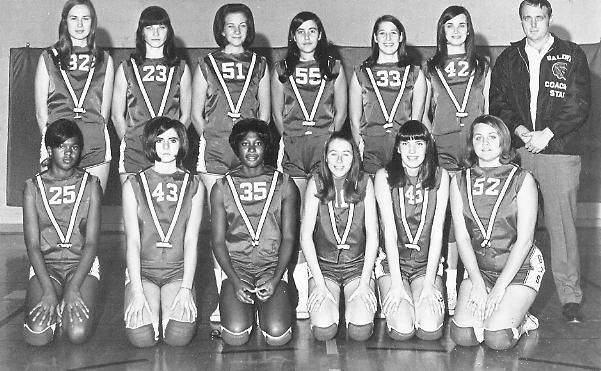 Mary Teague Royal (second row, far left) was a co-captain of the Baldwin High cheerleaders in 1970.

EDITOR’S NOTE: This feature is part of an ongoing series on the Baldwin High and GMC Prep classes of 1970 — 50 years later.

Let's start out with a couple of memos:

Memo No. 1 to Food Network execs:

Yeah, I know, you've already got a "Pioneer Woman" show on the Food Network.

Ree Drummond whips up fried pork chops and stuffed bell peppers from her opulent kitchen on the family ranch in Oklahoma.

But how about doing a show on a real pioneer woman?

She lives in South Carolina and she cooks authentic pioneer food, such as venison.

Her name is Marian Martin Harkins.

Isn't it about time you guys put a flower and garden show back on your network?

After all, the "G" stands for Garden, doesn't it? The last garden show I remember was "Gardening by the Yard."

You've got "H" shows galore. "Love It or List It" and those "Property Brothers," to say nothing about Chip and Joanna Gaines on "Fixer Upper."

How about doing a show with an expert at growing flowers and making floral arrangements? She runs "The Royal Gardens" in Elko, Ga.

Her name is Mary Teague Royal.

They were classmates in the Baldwin High Class of 1970.

Marian and her husband, Bob Harkins, live down a dirt road on the 225 acres they own near rural White Oak, S.C. Her vacation home, a log cabin that Bob built, is two miles away.

"Our closest neighbors are cows," she said. "We're definitely in the woods."

They have lived there for more than 40 years, raising three children.

"I was a stay-at-home mom and I loved it," Marian said. "Baseball practices, you name it, we did it."

Bob, known for his knowledge of wildlife, woods — all things outdoors, is retired from the South Carolina Department of Natural Resources.

Marian's always had plenty to do. Bob killed the wild game. She cooked it.

"We've eaten deer, wild turkeys, wild boar, quail, doves, ducks — everything. It's all in the freezer," she said.

"Bob loves to tell people we eat squirrels. We do, really. It kind of turns people's stomachs, but it's really good. People say, 'How can you eat that?' They just haven't had it. It's just normal for us," she said with a big laugh.

How do you cook squirrel?

Well, Marian said, it tastes like chicken. The tender ones, you can batter and fry. Some you have to parboil first.

"I've cooked them every kind of way," she said. "They're different, but I'm always looking for different kinds of things."

Venison tenderloin ("You can't get anything better than that.") and fried wild turkey ("You cut off the breast and fry it and it's almost like eating Chick-fil-A.") are family favorites.

So who cleans and dresses the wild game?

"I'll clean fish, but I put my foot down at cleaning other game," she said. "Bob does that."

When she's not cooking wild game, Marian is winning blue ribbons for her pies at the South Carolina State Fair. Pecan and apple are her specialties.

"I've always loved to bake," Marian said. "I learned it from my mother. Getting ready for the fair is a fun thing to do in the fall."

Her daughter, Rebecca, also has won blue ribbons and specializes in making wedding cakes. That is, when she's not dressed in her camo and hunting wild turkeys with her father or two brothers.

The older of the brothers was born in the front of a Toyota pickup truck as Bob rushed Marian to a hospital in Columbia, S.C., 40 miles away.

"Bob was flying down the road because he knew it was about to happen, but he did pull over in time to catch the baby before he hit the floor board," Marian said. "I had slept through most of my labor and I thought I had just started. I was determined I wasn't going to have anything, just be all natural."

After that, Bob drove the speed limit the rest of the way to the hospital and they decided on a name for the baby — he's Little Bob. Big Bob casually walked in the hospital and told them that his wife just had a baby. They came flying out with a stretcher.

"I bet I'm the only one in the class that did that," Marian said.

Real pioneers, in more ways than one.

Mary and her husband live in Elko, Ga., just south of Perry and not far from state fairgrounds on I-75.

She taught in Gwinnett County and Houston County schools for almost 30 years and retired after serving as a principal in Hawkinsville. She also was an education consultant in Alabama for five years, working with schools that had nothing.

"I helped them get technology," Mary said. "Every student got a device, a major change. It was very rewarding."

"We meshed two families," Mary said. "We have two grandchildren, 4 and 6, who live with us."

About 15 years ago, Mary started thinking about a business to have when she retired.

"I'm not one of those people who could just retire and do nothing," she said.

A flower farm was her dream. What started out as a few rose bushes has grown into The Royal Gardens. They sell a wide variety of cut flowers such as zinnias, sunflowers, gladiolas, calla lilies, show mums, tulips, daffodils and dahlias.

Mary was scheduled in March to speak to the three Garden Clubs in Milledgeville before the coronavirus pandemic hit.

Under normal circumstances, she sells flowers and arrangements at the Perry Farmer's Market on Saturdays and has a subscription service for people to buy a new arrangement every week. She also sells to florists and to interior and exterior decorators.

"We grow a little bit every year," Mary said. "We're at point where I'd have to hire more people in order to really grow, but I'm not interested in managing a whole lot of people, so we're not going to grow as much as we could.

"It's hard work; it's tough, but it's still a good time. It's hard to be a farmer. It makes me so appreciative of what they go through. You are at the mercy of the elements. From April until October, it's fulltime. But we have more time in the winter to travel and do other things."

Mary had moved back to Middle Georgia in part to help look after her mother, Lola Teague, who had Alzheimer's before passing away almost 20 years ago. Mrs. Teague was a longtime PE instructor and cheerleader coach at Baldwin.

"I got a lot of my leadership skills from her," Mary said. "She was a workaholic. So am I. She never sat still. She got involved in all kinds of things. That's how she raised me."

Mary said one of the highlights of her career in education was being named Teacher of the Year by the National Council for the Social Studies (NCSS). The award was based on writing curriculum, presentations and the success of her students in competitions.

"It opened incredible doors for me, nationally and internationally, being on the NCSS board, keynote speaking, all kinds of things," she said.

People still call and ask her to do social studies presentations.

There you have it, ready-made shows for the Food Network and HGTV.