Friday marked 19 years since the world was turned upside down.

While it may be difficult to look back on the events of that 2001 day with the chaos it brought and the lives that were lost, choosing to remember the terrorist attacks and how the country came together is as important as ever.

That was a big part of the message delivered on the Georgia Military College Prep School campus Friday morning. Although it looked a little different from previous years, GMC Prep continued its tradition of hosting a ceremony to remember 9/11 and impress upon the cadets the importance of that day in addition to what happened resulting from it.

Lt. Col. Scott Seagraves, chair of the school’s history department, pointed out that this year’s event was different from any other in the past, not just due to the COVID-19 pandemic.

“Last year was the last year I will ever speak to cadets in this setting who were alive on that day,” Seagraves said addressing the cadets. “Even though none of you were alive, this catastrophic event has marked your lives and will continue to mark your lives.”

The pandemic did have some effect on the proceedings though, as normally the entire school attends the Patriot Day ceremony each year and it is also open to the public. This year, only the high school cadets stood in a socially-distanced formation listening to the messages passed along by the various speakers. Local elected officials, first responders and GMC Board of Trustees representatives were also invited. Although the world is very different due to the ongoing pandemic, Seagraves told The Union-Recorder after the ceremony that the school felt that bringing the annual event back in 2020 was paramount.

“We talk about getting back to normal, and for us this is normal,” he said. “The opportunity for part of our cadet corps to be able to pay honor those who perished on 9/11 and those who are continuing to fight the fight — it was really important to us.”

“This is a day we do not want to forget,” GMC President Lt. Gen. William B. Caldwell IV said in his address. “Somehow 19 years later, it’s a promise that continues to get harder to keep… We’re reaching the hard part of our duty to never forget. It’s up to all of us here to use this anniversary that we call Patriot Day to renew our commitment to remembering a day that was unlike any other. A day where the worst of humanity brought out the best in humanity. It’s also our duty to remember and honor the sacrifice of those who gave their lives in the War on Terror in order to ensure that we will never see another day like Sept. 11, 2001.”

While most of the day was about remembrance and reflection, there was also time for recognition. Each year GMC Prep challenges its students to compete in a school-wide essay contest with the topic centered on 9/11. Since this was the first year no GMC cadets were alive yet on Sept. 11, 2001, their charge was to tell the story of someone in their lives who could recall the events of that fateful day. This year’s winners were eighth-grader Nate Webster in the middle school and sophomore Helen Chow from the high school. Both were presented with medals they will wear as part of their Class A uniforms throughout their remaining years at GMC.

Also announced Friday were four scholarship winners as awarded by the NewDay USA Foundation. NewDay USA is a mortgage lending company for United States veterans, and according to CEO Rob Posner, the company puts 5 percent of its earnings toward its foundation. Through that avenue NewDay awards scholarships to kids attending military schools like GMC.

“We’re very proud to be able to give these scholarships to students that are going to schools like GMC with ROTC and JROTC programs throughout the country so we can promote the next generations and future leaders of our country,” Posner said.

Scholarship recipients have parents or close family members who died or were injured while in service to the country. Children with parents who served on multiple tours of active duty are also considered for the scholarships. This year’s recipients were third-grader Mya Faith Ballentine, third-grader Grayson Kile, fourth-grader Jeremiah Ellington and freshman Kade Horne.

Jon Jackson, father of Mya Faith Ballentine, who served six combat tours beginning in 2005, spoke to the media about what 9/11 and Patriot Day mean to him.

“Our history is there for a reason, not just to go back and learn about what took place on 9/11 with regard to the towers burning, but actually how the country came together and how we respected our firemen, policemen and servicemen,” said Jackson. “It didn’t matter whether you were black, white or brown, we all came together. We all knew as a country that the most vital thing for our survival was sticking together.”

Cannon fire went off four times Friday morning marking the times of the Sept. 11 attacks, beginning at 8:46 a.m. when the North Tower of the World Trade Center was struck. Throughout the remainder of the morning, GMC Prep cadets and staff continued the somber annual tradition of recording the names of those who lost their lives due to 9/11 and the ensuing Global War on Terror on the brick walkway leading up to the Old Capitol Building. Seagraves is the one who puts the lists together each year to be given out to the students, and the job isn’t getting any easier.

“The difficult part of it is adding names,” he said. “Unfortunately, that happens every year. I think since last September I added 26 names to our list. I create those lists that our kids use to write the names with. I get to put my hands on them and get to read them. For me, that’s part of my gift. It’s an emotional thing, and the volume of it is really just mind-boggling.”

The names written on the bricks in chalk will stand as a monument until they are washed away. Even though they will be gone, we will never forget. 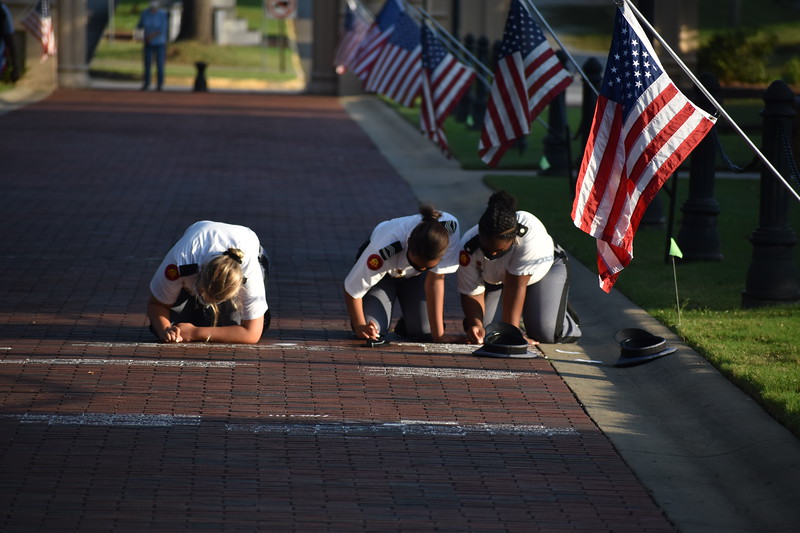