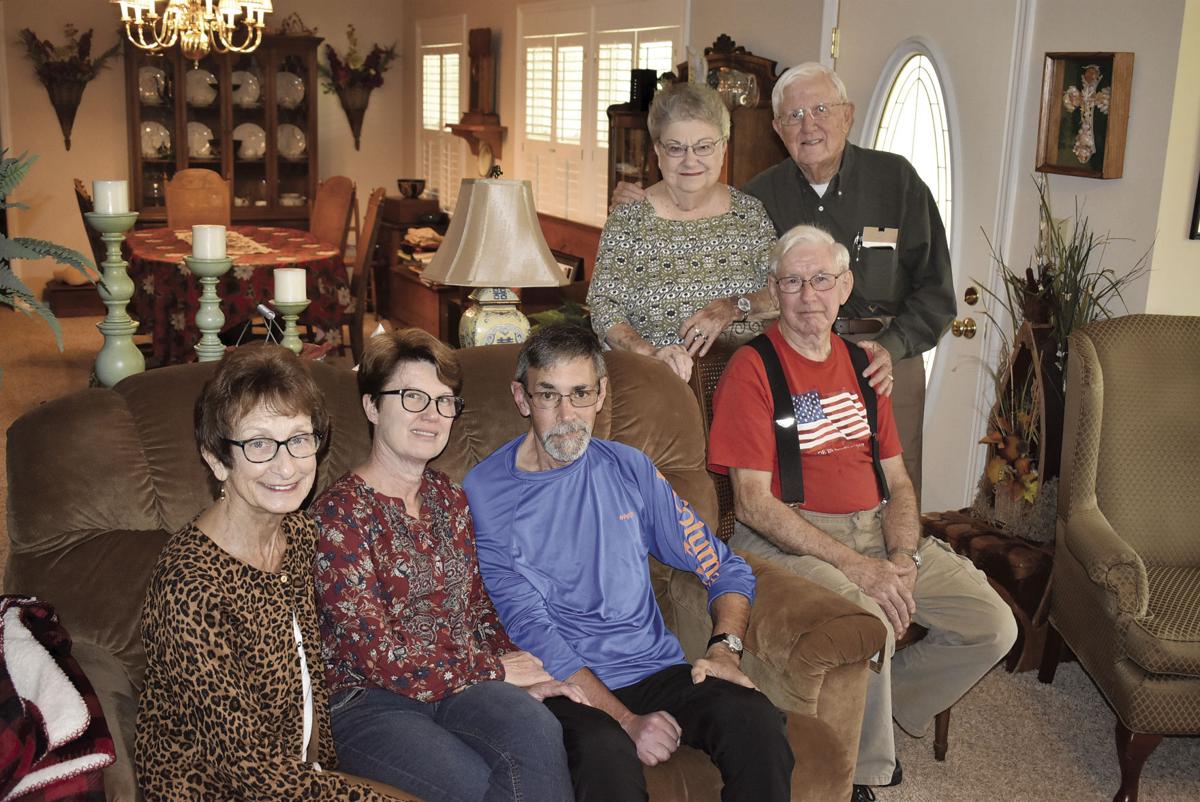 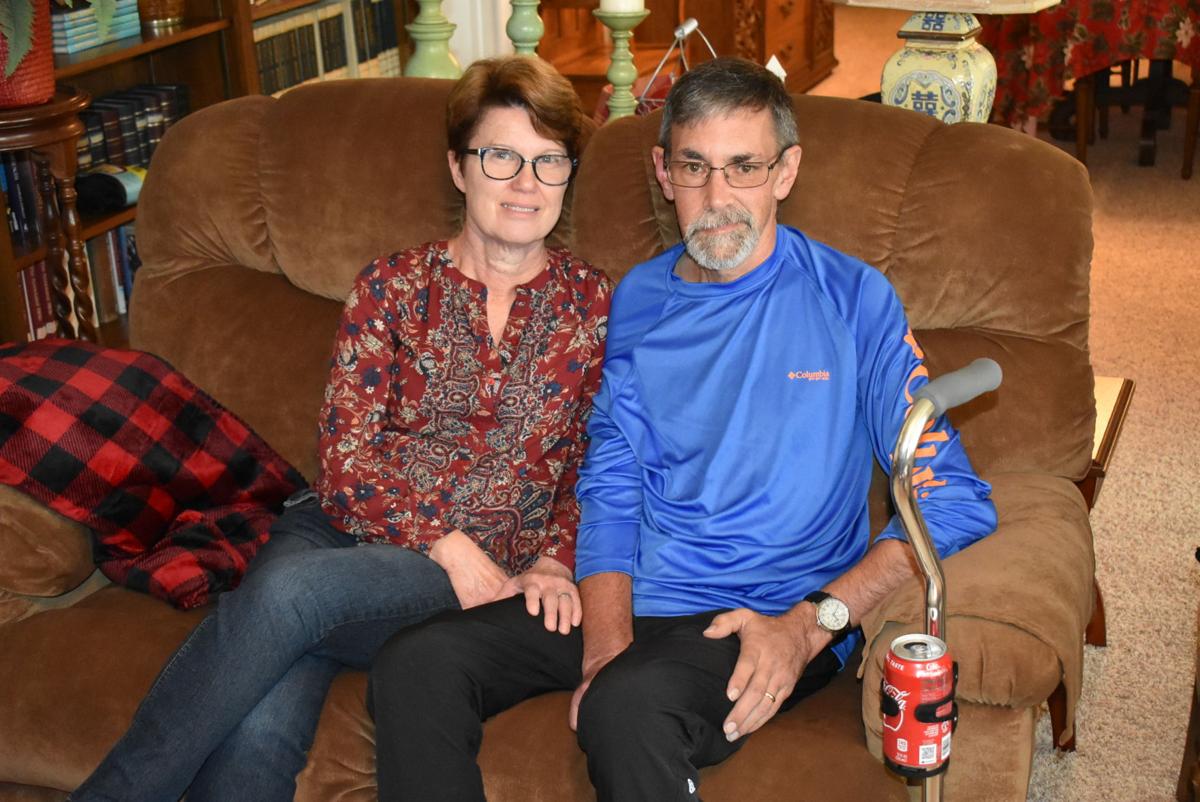 As they get ready to pose for a group photograph, Alan McElheney frantically points at his friend, Brad Oliver.

They’re the only words he’s uttered the entire 30-minute interview.

It takes his wife, Marty, only a couple seconds to figure out what he is saying.

“He wants you to button your top button on your shirt,” she tells Oliver.

Oliver, who is retired from the Army, grudgingly obliges and makes a joke about “those Navy guys.”

Alan, who retired in 2003 from the Navy, where he served in ordnance, loading bombs on airplanes, has a dry sense of humor, according to his wife. She said it served him well as a teacher in Germany and the Netherlands while Marty followed her career with the Department of Defense.

“In 2008, I got a position with the Department of Defense schools in Europe. So we both went to Bamberg, Germany. And we were there for six years and he worked with the special ed students and I (was) the school librarian,” Marty said. “The kids loved him. Middle schoolers, especially, were his favorite.”

When the school closed after six years, the couple moved to the Netherlands to take on the same roles at a NATO school. It was there that Alan started having health issues.

“He had his first episode in August of 2018 where he had a really bad memory lapse,” Marty said. “And then he had a bona fide stroke in November where he lost his ability to speak properly.”

Alan took some time off work and started back part-time as he regained his speech. And it happened again.

Marty said she decided it would be best for Alan to be in the States at that point.

“I finally got an ambulance to take him from Maastricht, Netherlands to Landstuhl, Germany, which was probably four or five hours,” Marty said. “And they immediately processed him for a Medivac."

A military Medivac flew Alan from Landstuhl to Walter Reed National Military Medical Center in Washington, where he stayed for two weeks. While he was there, a brain scan revealed Alan had had another stroke some time since the last one, bringing his total up to four.

“They never did figure out why (he was having strokes),” Marty said.

After further treatment at The Shepherd Center in Atlanta, and home therapy, where the couple now lives in Savannah, Ga., Alan and Marty are hopeful for the future.

Physically, Alan has made a remarkable recovery and the strokes have stopped — for good, they hope. There is still work to be done when it comes to his speech.

“Initially, he was bed-bound,” Marty said. “And he was in tremendous pain. I don’t know how to explain it because you’re not used to seeing an adult scream at the top of their lungs pain.”

He has learned to manage the pain. After initially losing control of his right side, he eventually regained use of his right leg. Now, although his right arm still doesn’t function, he’s mobile and walks with a cane.

Alan’s biggest issue at the moment is aphasia, a condition which, to put it simply, hinders the connection between the brain and the vocal chords.

“He might want a Coke, but he’s gonna say, “hat,” Marty said. “It’s fully formed in his head, but when it comes out, it’s not what’s in his head.

“He gets very frustrated. He does try to have more in-depth conversations, but he can’t.”

Marty hopes they have the solution to help Alan fully communicate again. It’s an intensive speech therapy program at The Aphasia Center that doctors at The Shepherd Center recommended.

“I believe it’s six hours a day that they work only on speech and aphasia. They recommended six weeks,” Marty said.

That will set the McElheneys back $30,000. Insurance won’t cover the cost.

That’s where Brad Oliver comes in. He and his wife, Gail, have put together a fundraiser, along with Alan’s dad, Jimmy, and his wife, Charlene.

“This is special family to us,” Oliver said, gesturing to Marty and Alan, as well as Jimmy and Charlene.

All three couples have been friends for years.

“Our church, Hopewell Methodist, and (Jimmy and Charlene’s) church, Westview Baptist, are going together to make it happen on Feb. 9, lunchtime,” Gail said.

Brad had already sold 300 of 400 tickets for the $10 barbecue plate sale as of Wednesday.

“I’m not gonna stop until we get the 400,” he said. “I think that’s all we can handle right now, and then we’ll see how all that goes and we’ll make another decision on what we do or don’t do.”

When asked what it meant to her that her friends would rally behind Alan to make sure he got the necessary treatment, Marty got emotional.

— Tickets for the barbecue fundraiser for the McElheneys can be purchased for $10 from members of Hopewell United Methodist Church or Westview Baptist Church, or by calling Brad Oliver at 478-363-1013 or Gail Oliver at 478-363-1012. Takeout meals can be picked up Sunday, Feb. 9, from 11:30 a.m. to 1:30 p.m. at Hopewell UMC, 188 Hopewell Church Road NW in Milledgeville, or eaten at the church at 12:30 p.m. Delivery will also be available for groups of eight or more. Tickets will be capped at 400. Donations may also be made by clicking here.