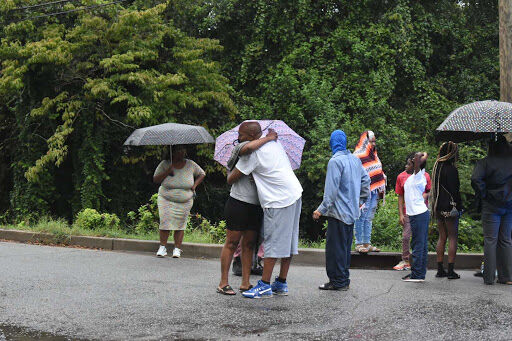 Friends and family of  LaTorra ‘Torra’ Michelle Tillman, 33, console each other at the scene on Doles Boulevard on Wednesday. The body discovered in a wooded area is believed to be the body of Tillman, who was reported missing earlier this month. 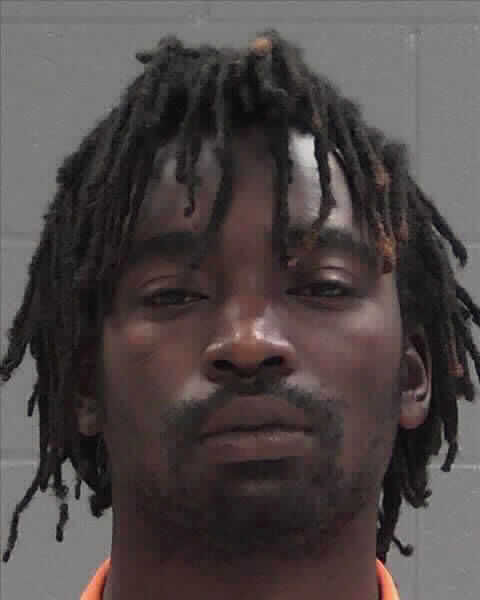 Friends and family of  LaTorra ‘Torra’ Michelle Tillman, 33, console each other at the scene on Doles Boulevard on Wednesday. The body discovered in a wooded area is believed to be the body of Tillman, who was reported missing earlier this month.

The body of a woman discovered in a thickly wooded area of a Milledgeville neighborhood Wednesday afternoon is believed by local authorities to be that of a local woman reported missing earlier this month.

A short while after police responded to the scene, the woman’s boyfriend was taken into custody at the Oconee River Greenway and questioned by detectives with the Milledgeville Police Department.

Milledgeville Police Chief Dray Swicord later identified the suspect as 26-year-old Clemmon Jamar “C.J.” Hunt, who since has been charged with felony murder in connection with the death of LaTorra “Torra” Michelle Tillman. The 33-year-old victim was reported missing by her mother, Lillian Cole, earlier this month.

Ironically, Hunt is the same man who attempted to take his own life by jumping from the Bobby Parham Bridge at the Oconee River on the morning of Sept. 4, The Union-Recorder has learned.

Hunt, who last worked as a dishwasher at a local restaurant, told officers with the Milledgeville Police Department, as well as firefighters with Milledgeville Fire Rescue and personnel with Grady Emergency Medical Services that he was going to end his life because he had killed his girlfriend.

Authorities confirmed that Hunt had been seeing Tillman romantically.

The newspaper first learned that Hunt had attempted suicide while seeking a report about the incident through Milledgeville Fire Rescue Chief William Collier.

When emergency personnel arrived at the scene, the man, armed with a razor and threatening suicide, had managed to get into the power building, telling everyone there that he was going to jump off, according to a fire department report, which was obtained by the newspaper.

Collier said one of his firefighters, Eric Harper, later helped talk the man out of doing what he had threatened to do.

“The man who threatened suicide told everyone there that he was going to kill himself because he had killed his girlfriend,” Collier said, noting that was what his battalion chief had told him concerning the call. “It was the same man that police just arrested for supposedly having killed his girlfriend.”

Authorities confirmed that the man was C.J. Hunt.

Such information didn’t come as a surprise to Swicord. It was something police already knew.

“He said it several times,” Swicord said, referencing what Hunt told others at the scene at the bridge.

Swicord said it was based on that information that police went to Hunt’s residence.

“We’ve been to that residence a bunch of times and walked around in the woods, and all, but we didn’t find anything and certainly not a body,” Swicord said. “You would have almost had to know where this person was to find them.”

Swicord said there was apparently “a little hangout area” near a creekbed where several people go.

The police chief said some of Tillman’s friends decided to walk down there on Wednesday afternoon.

They later called police to tell them they thought they had discovered the missing woman’s body.

Law enforcement officers from both the Milledgeville Police Department, as well as Baldwin County Sheriff’s Office, along with the Georgia Department of Community Supervision Services went to the scene and closed down the entire neighborhood for a period.

“When you got to that vicinity, and when I say 50 yards, and I say 50 yards, literally, you definitely knew something was there because of the smell,” Swicord said of what police officers and detectives later discovered after getting to the scene.

He explained that officers searching the wooded area previously had no reason to believe that a body was located where one was later discovered.

“There were two issues going on at the time when we first searched some of that wooded area,” Swicord said. “She’s (Tillman) been known to fall off the grid for a while.”

The police chief said Hunt told them during questioning that he and Tillman had been smoking meth for eight or nine days.

According to Swicord, Hunt was a known drug dealer and sold meth.

Swicord said he conferred with his detectives and they decided to work the crime scene themselves and not request assistance from the Georgia Bureau of Investigation Region 6 Office in Milledgeville.

“This person who found the body had once lived there in the apartment with Hunt,” Swicord said.

The woman and the others she was with on Wednesday went to the creek area where they used to hang out, he said.

“When they got close to that area is when they smelled the odor and found what appeared to be a body because it was wrapped up in a blanket,” Swicord said.

Swicord said the woman went there Wednesday afternoon to retrieve some belongings she had left at Hunt’s apartment when she had moved out some time ago.

When asked, the police chief indicated that the woman was Amy Rybicki, Hunt’s former girlfriend.

“We interviewed her and those with her, and we’re still interviewing people,” Swicord said.

Baldwin County Coroner John Gonzalez said Deputy Coroner Steve Chapple was called to the scene and is now involved in the joint investigation with the Milledgeville Police Department.

The body was taken to the Georgia Bureau of Investigation Crime Laboratory in Macon for an autopsy to determine the exact cause of death, Gonzalez said.

Authorities still were awaiting a preliminary cause of the woman’s death and confirmation of her identity on Friday afternoon at press time. Authorities were awaiting medical and dental records to assist them in the identification.

“I’m saying the body has probably been there since the end of August and maybe the first of September,” Swicord said.

Police also are seeking the public’s help in the case. Anyone with information about the case is asked to call the Milledgeville Police Department tip line at 478-414-4413.

Mrs. Shirley Cooper Miller, 77, passed away on Oct. 25, 2020. A graveside funeral service will be held on Friday, October 30, 2020 at 12:30 in Heritage Memorial Park. The family will be at Williams Funeral Home on Friday from 11 a.m. until noon to receive friends. Mrs. Miller was the daughte…

The world lost a wonderful husband, father, teacher, coach, mentor and friend when Mike Lay passed away on October 22nd, 2020. Mike began his coaching career at Baldwin County High School and continued following his passion of coaching until a day before his passing. To share a memory of Mik…