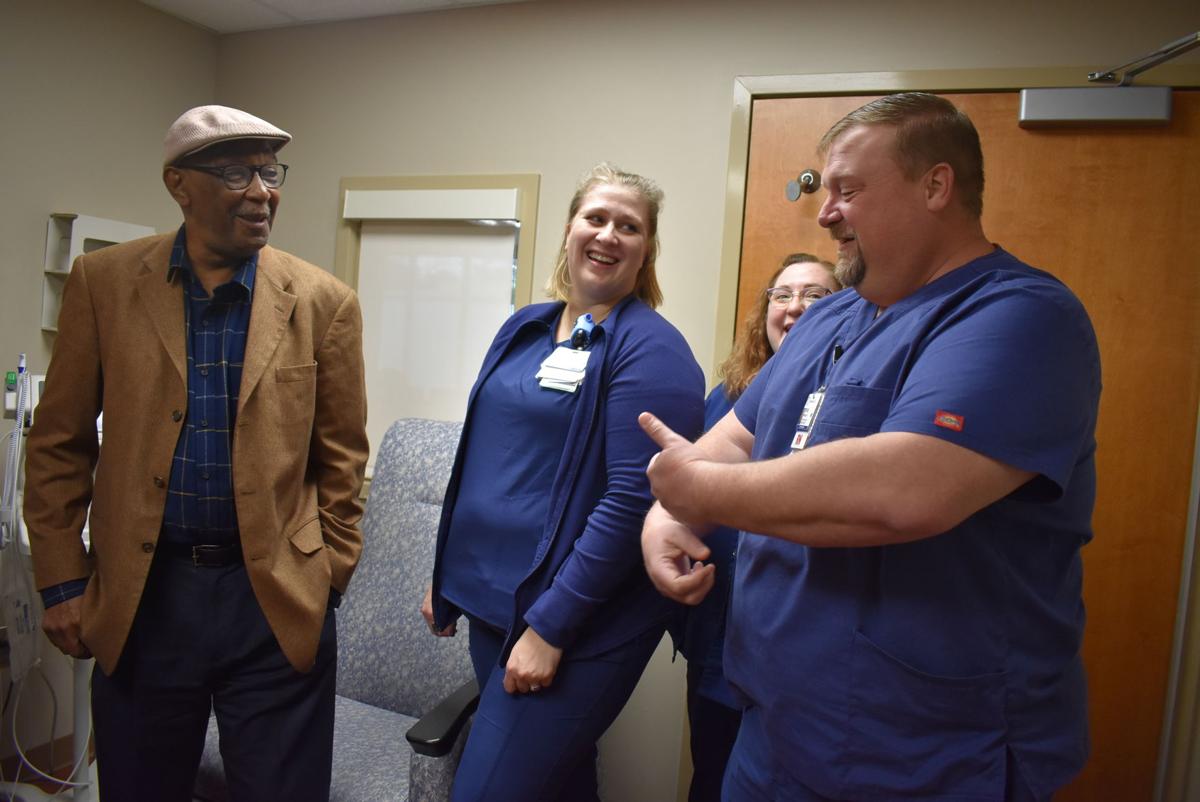 Hillman Graves thanks Stephanie Kirby, Ashton Duncan and Steve Sinclair for helping save his life after he had a heart attack last October in the emergency room of Navicent Health Baldwin hospital in Milledgeville. 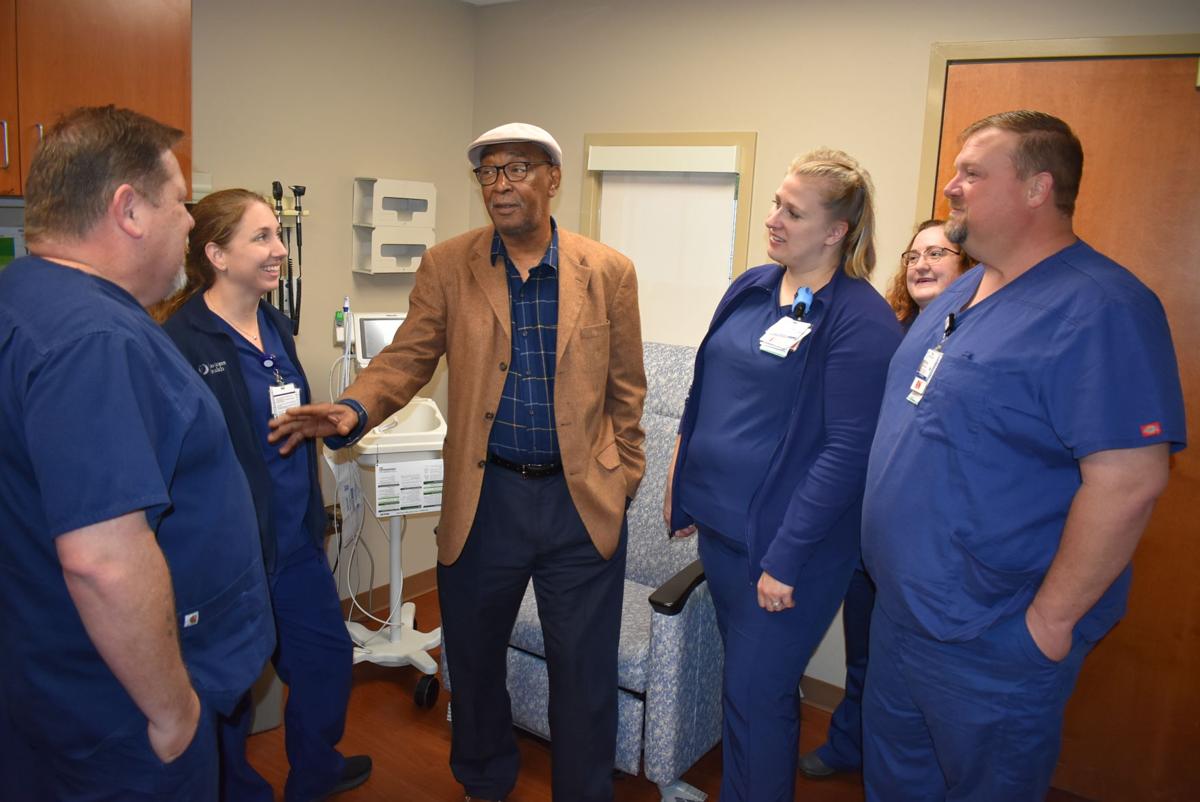 Hillman Graves talks with Elaine Portwood and Pete Gray, both of whom are registered nurses, who along with others, saved his life at the local hospital last October when he was having a heart attack. 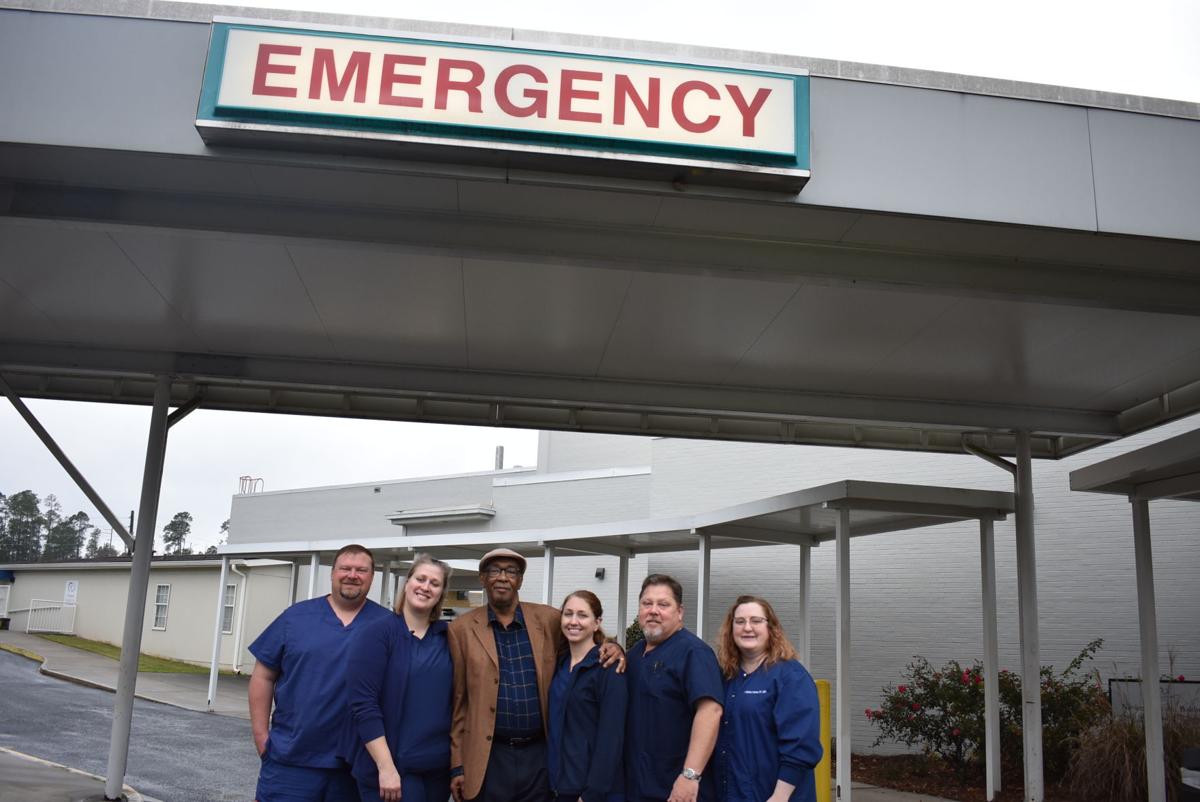 Hillman Graves stands with some of the registered nurses outside the entrance of the emergency room at Navicent Health Baldwin hospital in Milledgeville. He got an opportunity to personally thank them during a reunited time at the hospital last week. Standing (left to right) are: Steve Sinclair, Stephanie Kirby, Hillman Graves, Elaine Portwood, Pete Gray, and Ashton Duncan.

Hillman Graves thanks Stephanie Kirby, Ashton Duncan and Steve Sinclair for helping save his life after he had a heart attack last October in the emergency room of Navicent Health Baldwin hospital in Milledgeville.

Hillman Graves talks with Elaine Portwood and Pete Gray, both of whom are registered nurses, who along with others, saved his life at the local hospital last October when he was having a heart attack.

A Milledgeville church pastor knows all too well what it’s like to be at the brink of death.

That’s where 67-year-old Hillman Graves found himself on Oct. 22 last year when he suffered a heart attack in the emergency room of Navicent Health Baldwin hospital in Milledgeville.

Graves, who has been involved in the ministry for the past 41 years, now shares his story in hopes that it might save the lives of others who have medical conditions related to their hearts.

“Thank God for this group right here,” Graves said, pointing to some of the registered nurses who helped save his life when he was reunited with them at the hospital last Friday. “I just wanted to come back and tell you all how much I appreciate what you all did for me.”

Graves said his first wanted to thank God for sparing his life, and secondly the medical staff who took care of him during and after he experienced a heart attack.

He recalled that it all happened so quickly.

First, Graves remembers sitting in Dr. Michael Duke’s office and the local physician telling him he needed to go to the hospital because an EKG test had come back abnormal.

“He immediately told me to go straight to the emergency room,” Graves said.

As it turned out, Graves followed his doctor’s instructions to a tee.

About five minutes after Graves’ wife, Jeanette, drove her husband from the doctor’s office to the emergency room of the local hospital, Graves went into full cardiac arrest.

“They became aware of the situation and their expertise kicked right in,” Graves said of the medical team and how well they worked together. “They grabbed me and I felt their love, even with the needle man. He said, ‘I had to do what I to do to save your life.’”

Graves was referring to Pete Gray, a registered nurse.

When his wife was driving him to Navicent Health Baldwin, Graves said he was experiencing a burning sensation in his chest.

“I just thought it was heartburn until Dr. (Bennett) told me that I was a sick man and that they were trying to get him ready for a trip to Macon,” Graves said, noting he wasn't in the ER five minutes before he suffered a heart attack.

That’s where Elaine Portwood took over.

“We needed an EKG right away,” Portwood said. “The one we use down here was actually being used on somebody, so I had to go to the back and find the other one and bring it down here because we didn’t want to wait any longer.”

Like was the result of the EKG that was run at Dr. Dukes’ office, it came back abnormal.

“Actually, Dawn (Stone), one of our P.A.’s (physician’s assistant) had already spoken to Mr. Graves and gotten some information about who his cardiologist was and his medical history,” Portwood said. “So, she was able to tell Dr. Bennett all of that and he called the cardiologist right away. And Dr. Bennett came down here right away, too, to see Mr. Graves.”

The situation became a matter of life and death at that point.

“Dr. Bennett came out of the door, and said, ‘Code Blue,” Portwood said.

Two of the first people she found were Pete and Steve Sinclair, who also is a registered nurse, as well as Ashton Duncan, the ER director.

Stephanie Kirby, another registered nurse was serving as charge nurse that particular day, said throughout the emergency situation that she and other medical staff tried to keep Graves as calm as possible.

Kirby explained that she and other medical personnel are taught that it’s important to try and keep a patient as calm as possible in a situation such as the one Graves experienced.

“Definitely when you have a height-leveling anxiety with heart trouble, it can make things worse, so you want to try to make sure the patient stays calm,” Kirby said. “We just all made sure we took the next step and got him on over to Macon.”

Kirby was referring to medical staff calling in a AirEvac helicopter to fly Graves from the local hospital to the Cardiac Center at The Medical Center Navicent Health in Macon.

It actually marked the second time since May 28, 2011 that Graves has had to be flown by a medical helicopter for a heart attack. The first time that happened, Graves and his wife were living in Rockdale County near Conyers.

“It was the Saturday before Memorial Day,” Graves said. “They flew me from the hospital in Conyers to Piedmont Hospital in Atlanta. That’s where my original cardiologist was at then.”

He was asked by one of the staff members if he remembered either of those flights.

“I remember this past flight,” Graves said.

“It’s such a cool experience to shock somebody and them come awake instantly and start talking to you,” Kirby said. “It doesn’t happen very often. That’s what you see in the movies, so that’s kind of a rare occurrence. That’s happened a few times in my career, but so cool the way he woke up and just started talking to us.”

The staff used an AED, as well as medicines and a heart monitor.

Before he was transferred from Navicent Health Baldwin hospital to the Macon hospital, Graves underwent a heart catheterization, Kirby said.

Graves was asked by The Union-Recorder what he thought would have happened to him had there not been a local hospital.

“I would have died,” Graves said.

Gray said an emergency situation such as the one involving Graves was “time is muscle.”

Bottom line, Graves would not have survived, Gray said.

Asked what he would like to say to all of those in the room that played a part in saving his life, Graves quickly responded.

“God works His wonders through people,” Graves said. “It is very important to have this hospital here because I wouldn’t be here now, and neither would a lot of other people whose lives have been saved at this hospital. I thank God for you guys being in the position that you were in and having the expertise and the gifts that you have to help save my life. God couldn’t have used you, if you didn’t have your gifts. I thank God for each and everyone of you.”

Before embracing each one of the nurses, Graves told them if there was anything that he could ever do for either of them or the hospital in anyway, all they had to do was simply call him.

“My life was spared because of this hospital in Baldwin County,” Graves said.

Duncan said she was very proud of the team as a whole.

“I’m just so proud of the team and the hard work that they put in that day and every day,” Duncan said. “These rewarding moments that we have with Mr. Graves makes up for all the bad days. I’m very proud of them, and I’m proud they got to experience that moment. Y’all now have a reason to keep coming back every day. You make a difference in so many lives.”

In closing, Graves said it was most important to him to want to go back and simply let those who helped save his life know how appreciative he really was.

“I wanted each of them to know exactly how I felt about them, and just how much I appreciate them saving my life,” Graves said.