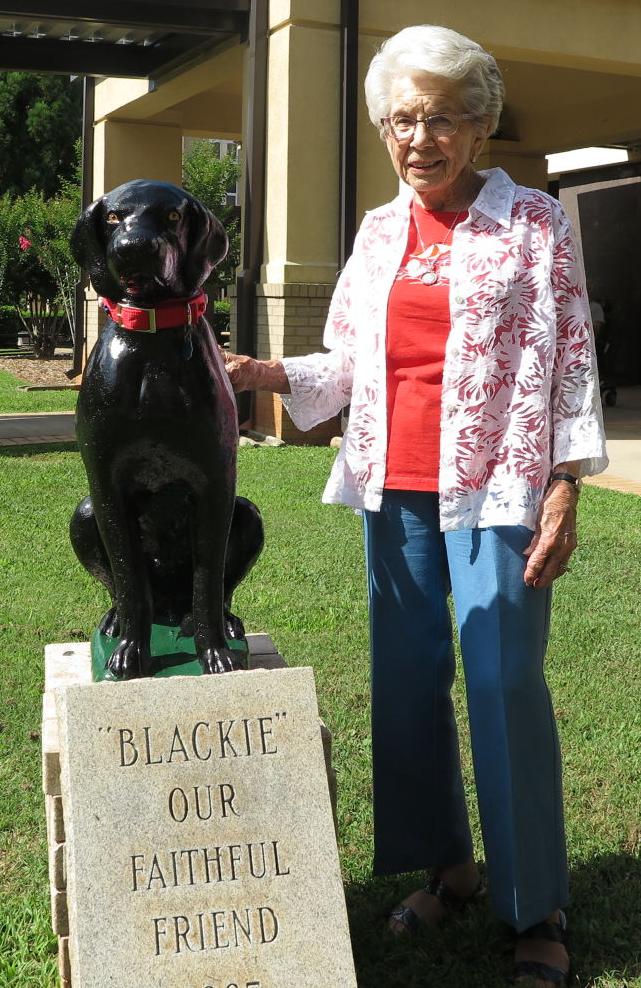 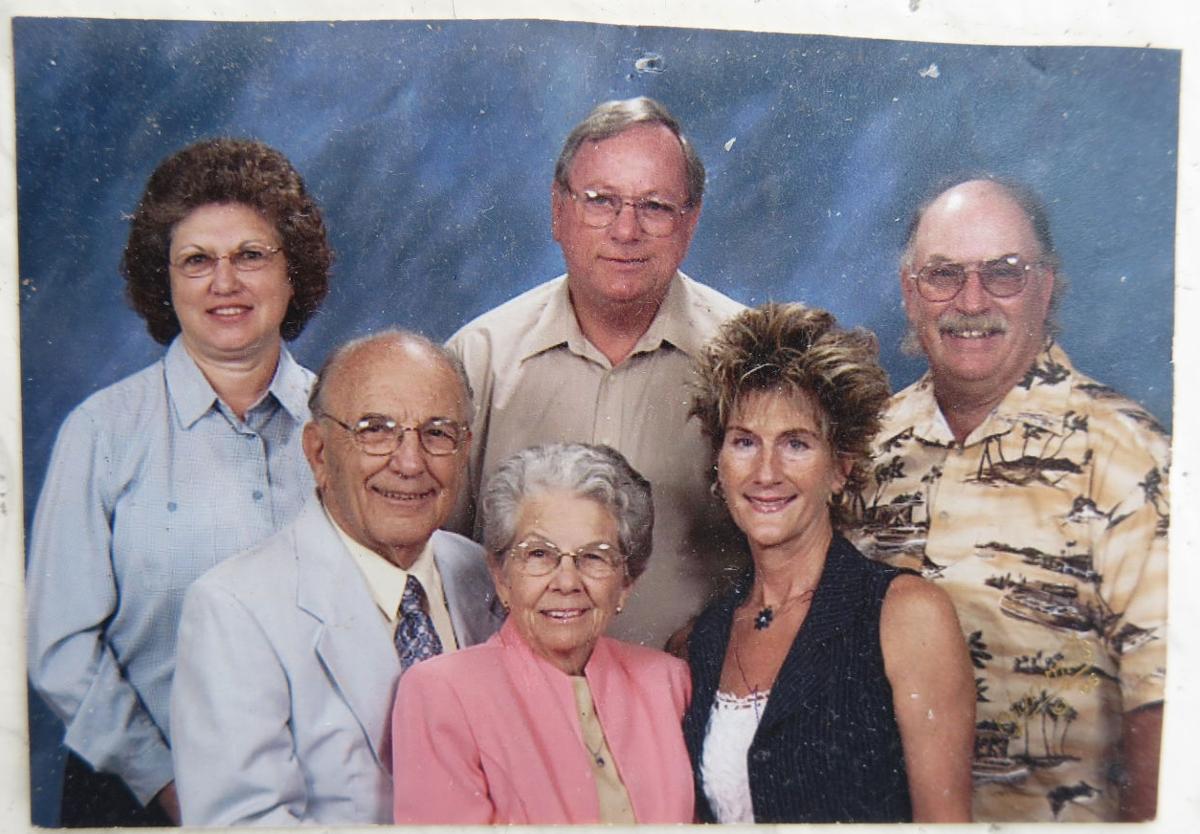 "Black our faithful friend"— ‘Blackie' is a statue of a beloved former therapy dog at the Georgia War Veterans Home. In memory of her late husband, Roy, who was fond of the statue while he lived at the GWVH, Meldra Harris Panchelli gave the statue a new coat of paint earlier this year.

When Meldra Panchelli got into a fender-bender roughly 15 years ago, the longtime Milledgeville resident had no way of knowing that the wreck would be a blessing in disguise.

“It was already dark, and when the patrolman asked me where I wanted my car towed, I said ‘to Pittman’s Paint and Body Shop’,” said Panchelli. “It just so happened that the young lady at the body shop latched on to me when I went to get my things out of the car, and I could tell she was a person that perceives: When you talk to her for five minutes, she can just about tell you everything about your life. … She found out that I used to dance, that I like shrimp, and that I had been a widow for 15 years. Her daddy had just lost his partner of two years, and he had moved from Florida up here and didn’t have anybody to dance with.”

Although they were brought together under the unlikeliest of circumstances, Panchelli and the clerk, Marion Coyle, formed an immediate bond. Days later, Coyle asked Meldra (who was then known as Meldra Harris) to accompany her, her husband, and her father, Roy, on a blind date. Although Panchelli declined the initial offer, citing her busy schedule as a volunteer at Milledgeville’s First Baptist Church, Coyle persisted, and Panchelli finally agreed to meet the trio for dinner that Friday evening.

“We went out to dinner and met [Roy], and he was mad as a wet hen because she had made a blind date and he hadn’t known anything about it until it was all done and over with,” said Panchelli. “He wouldn’t even speak to her, but she told me later on that when she said ‘Here she comes’, he stood right up, looked around, and said ‘Can I help you?’ He walked down the steps and helped me up, and I thought he was a real gentleman.”

From the time that they first met, Panchelli, 82, and Roy, 85, took an immediate liking to one another. A short time later, the couple were married. For the next thirteen years, Roy and Meldra spent their time swing dancing and volunteering at the Milledgeville-Baldwin County Habitat for Humanity until a series of falls sent Roy, a 35-year employee of the Department of Defense, to the Georgia War Veterans Home.

“Sometime back around the early 2000s, a female black lab just sort of wandered up in here, and we, as Georgia War, decided to adopt her and make sure she had all her shots and was taken care of,” said GWVH Life Enrichment Aid William Batson. “She was like a little pet therapy dog for everybody, and she liked to always hang out right here.”

During Roy’s brief stay at the GWVH last fall, the couple took a liking to a statue of “Blackie,” a former stray that had been adopted by the home’s residents.

“My husband and I used to sit out here eating lunch, and we noticed that she needed a new coat of paint,” said Panchelli. “My husband said we needed to do something about it, and I told him I thought I had enough paint left over from when I was doing our porch’s wrought-iron. We didn’t get it done before he passed away … I was determined I was going to do it, so I asked the Lord: ‘Please let me live long enough to get this dog painted’.”

Shortly after Roy’s passing last fall, Panchelli gained permission from the home to fulfill her late husband’s wish. For the next several weeks, Panchelli painstakingly set about giving Blackie a new coat of paint — scraping off the old coat, waiting weeks for rain to subside until the statue was dry, and carefully applying a fresh coat. Now, Blackie watches over the Wood Building courtyard in the same shade of black she wore during her life. Aside from memorializing a dog that brought happiness to countless GWVH residents during her life, the statue stands as Panchelli’s permanent tribute to her late swing dancing partner.

“It would make my husband so happy to know that I got it done.”

John H. Cooksey, 76, passed away Thursday, June 17, 2021. Services will be held at 11 a.m. Monday, June 21, at Baldwin Memorial Gardens Cemetery. Mr. Cooksey was born in Panama City, Fla. on July 3, 1944, to Vernon Cooksey and Helen Grace McCall Cooksey. He made his home in Milledgeville whe…

Wylene Crutchfield Taylor, 76, passed away Thursday, June 10, 2021. Services will be held at 11 a.m. Wednesday, June 16, at the chapel of Moores Funeral Home. Burial will follow at Macedonia Baptist Church Cemetery. She was born Feb. 13, 1945, to the late Loris Hilton and Ruby Jones Crutchfi…

A celebration of the life for John Robert "Bobby" Brown, 72, will be held at his residence on Wednesday, June 16, 2021, at 10 a.m. Bobby was born in Dublin, but his home was Baldwin County. He was predeceased by his parents, John Preston "Pete" Brown and Virginia Watson Brown. He was retired…

Marcus David "Mark" Chapman Sr., 62, of Milledgeville, passed away Thursday, June 10, 2021. Funeral services for Mark Chapman will be conducted Monday, June 14 at 11:00 a.m. in the chapel of Williams Funeral Home and Crematory in Milledgeville with Pastor Jamie Fullington officiating. Interm…