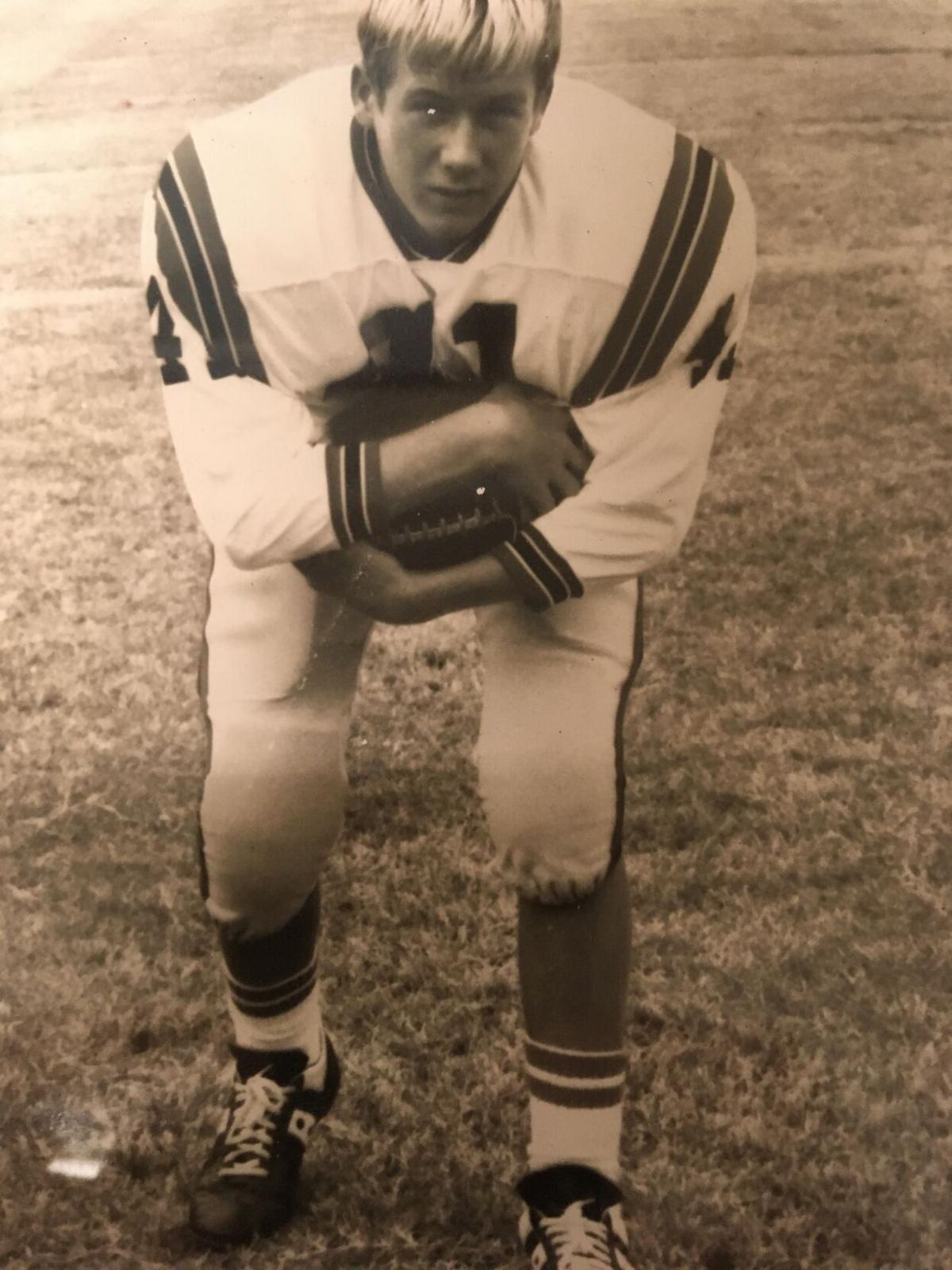 Rhett Harrison during his football days at GMC. 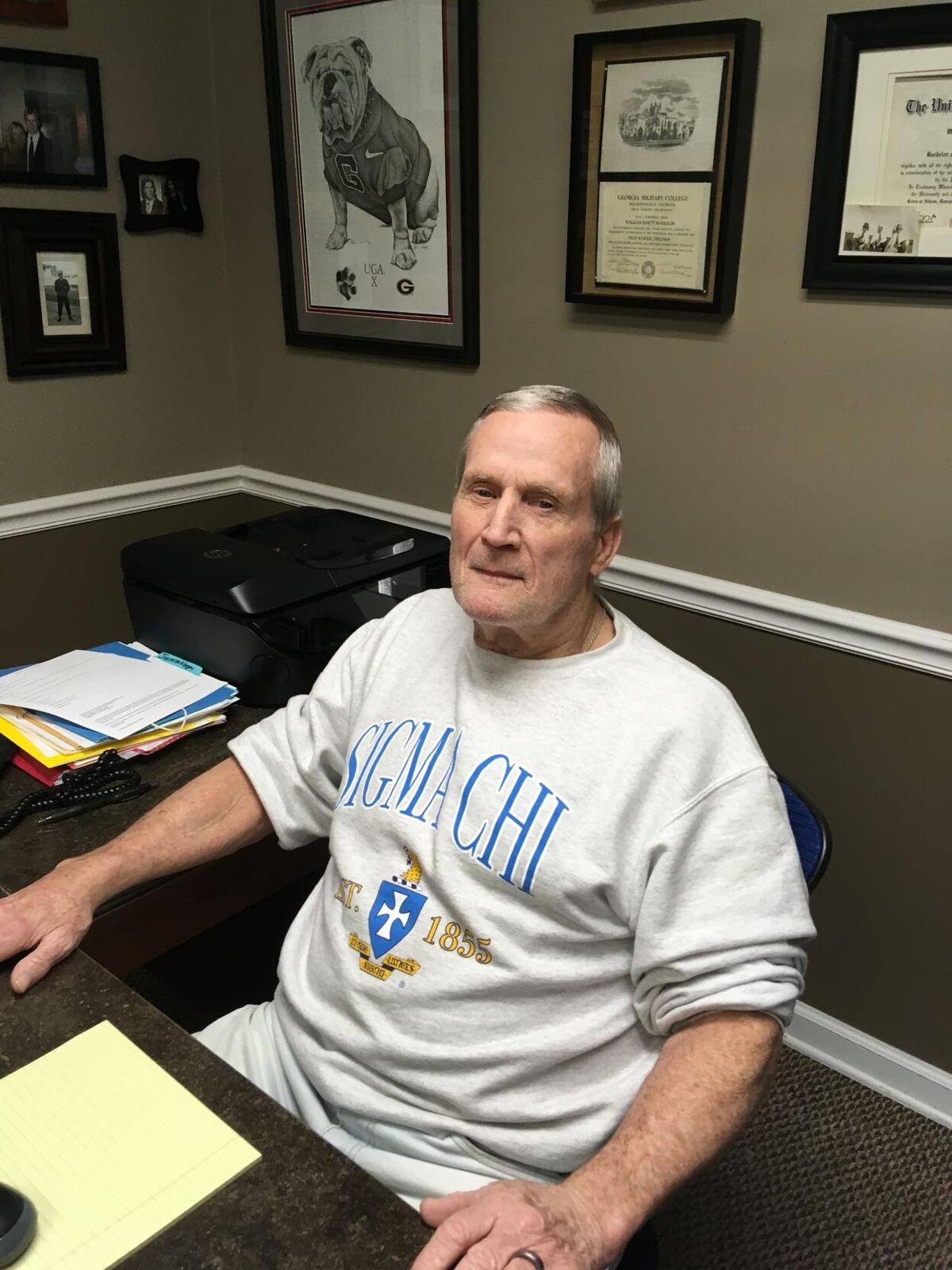 Rhett Harrison at his insurance office.

Rhett Harrison during his football days at GMC.

Rhett Harrison at his insurance office.

EDITOR’S NOTE: This is one in an occasional series of stories on members of the Class of 1970 at Baldwin High and GMC Prep.

Rhett Harrison always had a knack for being in the right place at the right time.

When he was a senior in high school at Georgia Military College and playing football for coach Freddy Layton, Harrison said he played just about every offensive position "known to man."

"Coach Layton had me playing fullback, quarterback, tight end, split end. … You never knew where I was going to line up. I could run the ball, catch the ball, or block. He used to say, 'If I had eight more Rhett Harrisons, I'd win the state every year,' " Harrison said with a big laugh. "You know what a politician he was."

Then, this past February, Harrison was at a follow-up appointment with a cardiologist after having some stents put in the previous summer.

Harrison suddenly had a heart attack in the doctor's office. They rushed him to surgery at the hospital just across the street.

Harrison said he had a "widowmaker," an informal term for a heart attack that involves 100 percent blockage in the left anterior descending (LAD) artery. It could have been fatal without emergency care.

He had more stents put in his main arteries and stayed in the Intensive Care Unit for four days.

"The good Lord was looking after me," Harrison said.

Since then, it's been a slow, steady recovery for Harrison, who runs an insurance agency in Milledgeville along with his wife, Mary.

Harrison and his family moved to Milledgeville from Florida before he entered the ninth grade at GMC.

"From West Palm Beach to here was a culture shock," he said laughing.

He played football at GMC with teammates such as Tom Moore, the late Doug Wray, the De Laosa twins (Mario and Pedro), Gary Swinger and Greg Baugh.

"Me and Tom and Doug, we were like the Three Musketeers," Harrison said. "Those were the good old days. We had a ball our senior year. It was a great time and a great place to grow up."

After college and a job in the music business, Harrison returned to GMC as the defensive coordinator under head football coach Ronnie Simpson. Six games into a season in the late '70s, Harrison's defense was unscored on and GMC was ranked No. 1 in the state for the first time.

"I'm proud of that," Harrison said.

Simpson and Harrison still like to kid about a scouting trip Harrison took early in his career at GMC.

"We had an open date and I sent Rhett up to scout Social Circle, our next opponent," Simpson said. "But when the game started the next Friday, they were running motions and lining up in formations we had never worked on."

It took Simpson and his staff into halftime to make adjustments. At one point, Simpson looked at Harrison and said, "What the heck is going on?"

"They ain't never done anything like this, coach," Simpson said Harrison told him.

But all was well because GMC won the game.

Years later, they met up at a GMC event and Simpson asked Harrison, "Rhett, did you really scout that game?"

Harrison said, "Coach, I promise you I went to that game. That was just the first game I had scouted."

Today, Harrison handles Simpson's insurance needs and when they talk, they still laugh about the scouting trip.

Harrison describes himself as a bionic man. Before his heart surgery, he had seven knee operations and shoulder surgery. His years of football in high school and playing semi-pro football with teams in Marietta and Macon took a toll, as did an accident when he slipped on ice and fractured a femur that required 14 screws. He said his hips "got out of wack."

He gives a lot of credit to his wife, Mary, who is also a licensed insurance agent.

"When it comes to paperwork, numbers-crunching and statistics, she's just brilliant and I'm not," Harrison said. "She's very structured and I'm not. If it wasn't for her, I probably wouldn't have my office after my heart attack. I'm the person who goes out and talks to people and slaps people on the back. She handles the office. So we're a good team."

Richard Martin and Harrison were teammates on their fraternity intramural flag-football team at the University of Georgia. Martin was the quarterback and Harrison was the running back.

"We were both very competitive — on the field and with the ladies," Martin said, laughing.

Martin was Harrison's big brother at the Sigma Chi Fraternity and helped usher him through initiation.

"That's where we built our bond," Martin said.

Martin and Harrison went their separate ways after college but reconnected when they discovered they were both in the insurance business.

"We share ideas, but we don't talk about specific clients," Martin said. "We talk policies and procedures, what works and what doesn't."

And whether they are talking on the phone or in person, the conversation always ends the same way.

"I love you," Martin says to Harrison.

"I love you," Harrison says to Martin.