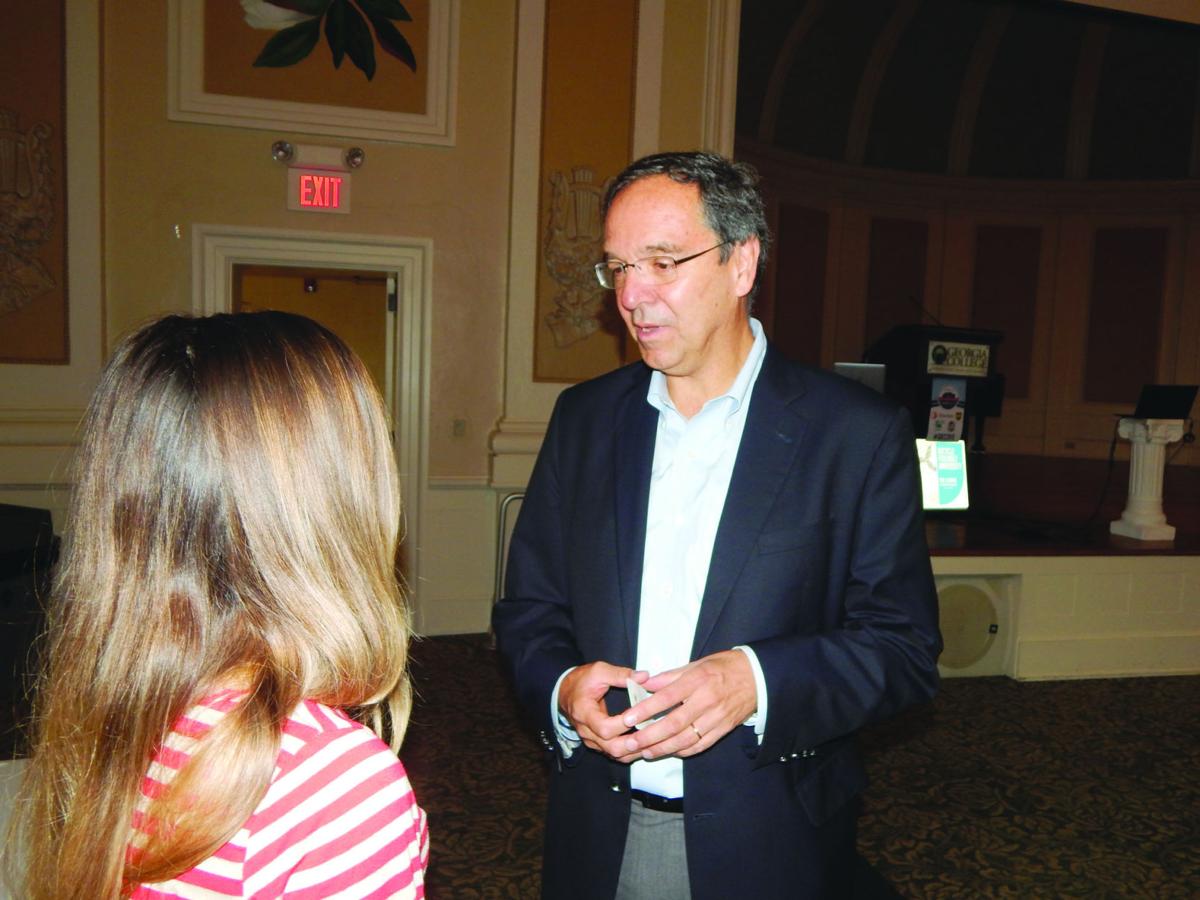 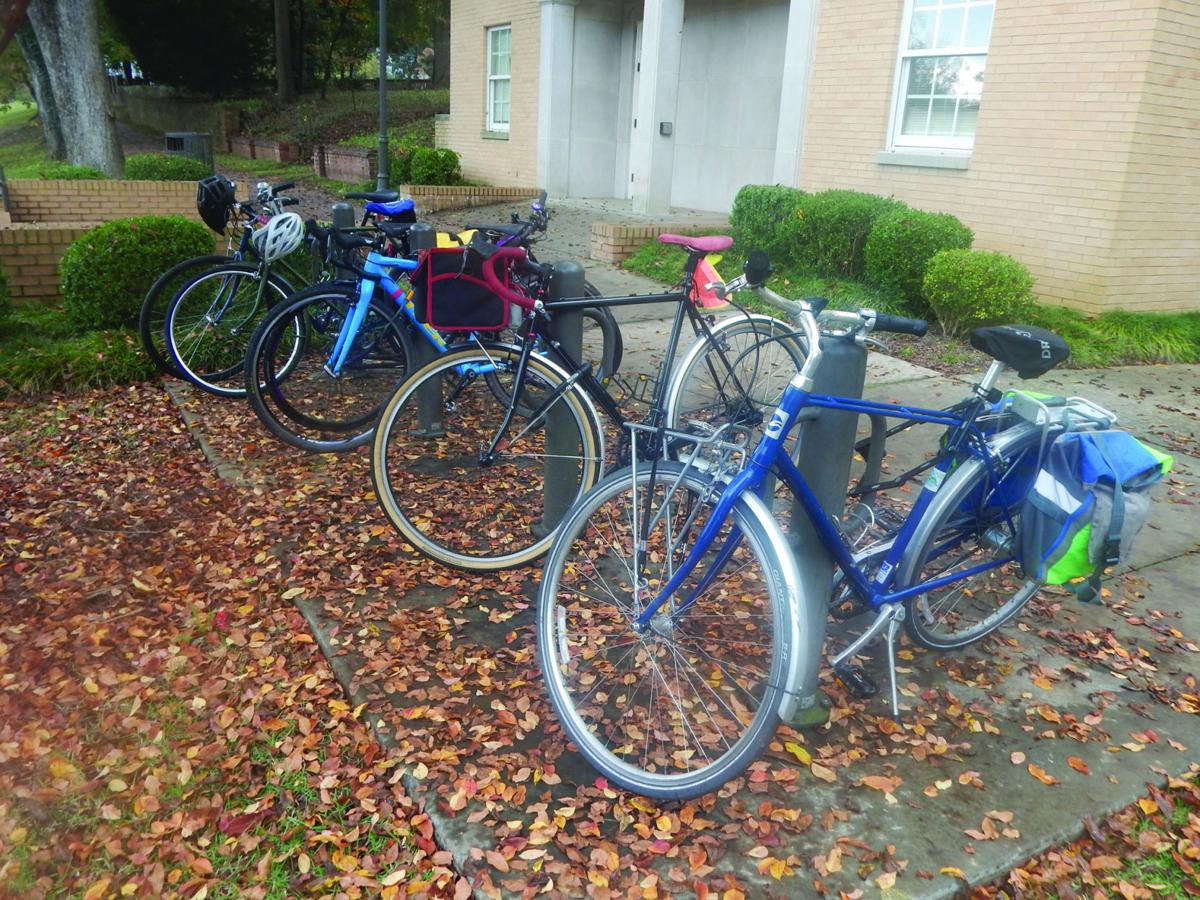 Gil Penalosa is a people-person, so it’s no wonder he wants to transform cities and towns around the world into more friendly and healthy places to raise families.

Penalosa, founder and chairman of the board of directors of the Toronto, Canada based 8 80 Cities, was the keynote speaker at the Georgia Bike Summit hosted in Milledgeville and Baldwin County for the first time ever this past weekend.

Johnny Grant, of Georgia College, officially welcomed Penalosa to dozens of bicycle enthusiasts who gathered Saturday morning inside Magnolia Ballroom on the campus of GC to hear the world renowned traveler talk about the significance of transforming cities and towns.

The guest speaker later addressed another crowd in the Maple Room of the Student Activity Center. There, he talked about community changes, and how some things come about quickly in communities and how sometimes they develop slowly and take patience, as well as “careful” cultivation.

“I have the pleasure of not only being a native of Milledgeville, but also being an employee of Georgia College,” Grant said before he officially introduced Penalosa. “I have the opportunity to work with President Steve Dorman, and he would like to send his welcome to you and to thank you for choosing Georgia College to have your bike summit.”

Grant told the bicycle enthusiasts from throughout Georgia that he hoped they would enjoy their weekend in Milledgeville and Baldwin County.

“We hope this bike summit turns out to be something very positive for you,” Grant said. “And we encourage you to come back and visit Milledgeville often.”

Grant said he attended a conference in Chicago last year where Penalosa was the keynote speaker and that he was “very impressed” by his comments.

“Not only is he passionate, but he also is knowledgeable and he gets people excited about trying to make cities more human friendly,” Grant said. “Gil, as I mentioned, is passionate about cities for all people. He advises decision makers and communities on how to create vibrant cities and healthy communities for everyone. Gil’s leadership and advice have been sought out by organizations in more than 180 different cities across six continents.”

Penalosa received a rousing applause from the crowd following his introduction.

When it comes to how cities and communities should be designed, it automatically triggers excitement in Penalosa.

He immediately talked about the word change, and that change is hard everywhere.

“Not only in Milledgeville, Atlanta or Macon, but it’s hard everywhere,” Penalosa said. “Even in Copenhagen.”

When it comes to urban planning, Penalosa said citizens can’t be spectators.

“Citizens must become involved,” he pointed out, noting they must find ways to work with elected leaders and other government officials to make mobility a force for health, wealth and happiness.

Penalosa, who once served as commissioner of Parks, Sport and Recreation for the city of Bogota, Columbia, said parks, walking, biking and transit are what’s needed in cities and communities around the world today.

“Bogota is evidence that this is not a financial issue, not a skills issue,” Penalosa said. “It is a political issue.”

A sense of urgency is needed for anyone thinking about transforming a city or community.

Urgency is a very real matter when you consider that obesity is at epidemic proportions, shrunken city budgets are rampant, there is exploding urban growth, climate change is occurring and populations are aging.

The next step involves implementing infrastructure that not only works for everyone, but also is attractive and creates an inviting atmosphere.

“We need to stop building cities as if everyone is 30 and athletic,” Penalosa said.

He said what he believes will work better for cities and communities around the world is reducing speed limits for cars and trucks, and to build better sidewalks, have street trees, parks and a complete network of protected bike lanes.

“We need to dignify the pedestrians and dignify the cyclists with sidewalks and protected bike lanes,” Penalosa stressed.

He would like to see more street art, sidewalk cafes, and much more.

Penalosa said when cities create more space for people that people tend to use that space for various events.

“We need people in this century to say, if there’s not enough space, we’ll just build for transit, bikes and pedestrians,” Penalosa said.

He strongly believes that cities, communities and people who don’t choose to rebuild their infrastructure and create what he called ‘great places to live’ are, in fact, failing the population of those areas.

“Walking or cycling is the only mode of individual mobility for youth and the elderly,” Penalosa said. “It should be a right.”

Martha Helen Locke Sammons, 88, of Milledgeville, passed away Friday, Oct. 22, 2021. Helen was born in Dublin, Ga. on Aug. 16, 1933, to the late David Flournoy Locke and the late Mary Etta Edwards Locke. Helen lived in Atlanta, Ga. prior to marrying Mark Sammons in 1956. After marrying, the …

Margaret "Mamoo" Hawthorne Sims left this world peacefully surrounded by her husband and daughters on Oct. 20, 2021, at the age of 77 at her home in Gordon, Ga. Margaret was born to the late Howard "Bud" Hawthorne and Evelyn Lee Hawthorne on Nov. 13, 1943, in Gordon, Ga. She was the granddau…

Bobby Stewart Evans, 85, left us to be with his Master on Tuesday, Oct. 19, 2021. Graveside services will be held at 2 p.m. Sunday, Oct. 24, at Baldwin Memorial Gardens Cemetery with the Rev. Jerry Bradley officiating. Mr. Evans was born in Milledgeville on July 2, 1936, to Jesse and Erline …

Teresa Hannagan Baker, 69, of Milledgeville, passed away Wednesday, Oct. 20, 2021. Funeral services for Teresa Baker will be conducted Saturday, Oct. 23, 2021, at 2 p.m. in the chapel of Williams Funeral Home in Milledgeville, with the Rev. Larry Giles and the Rev. W.R. Connell officiating. …