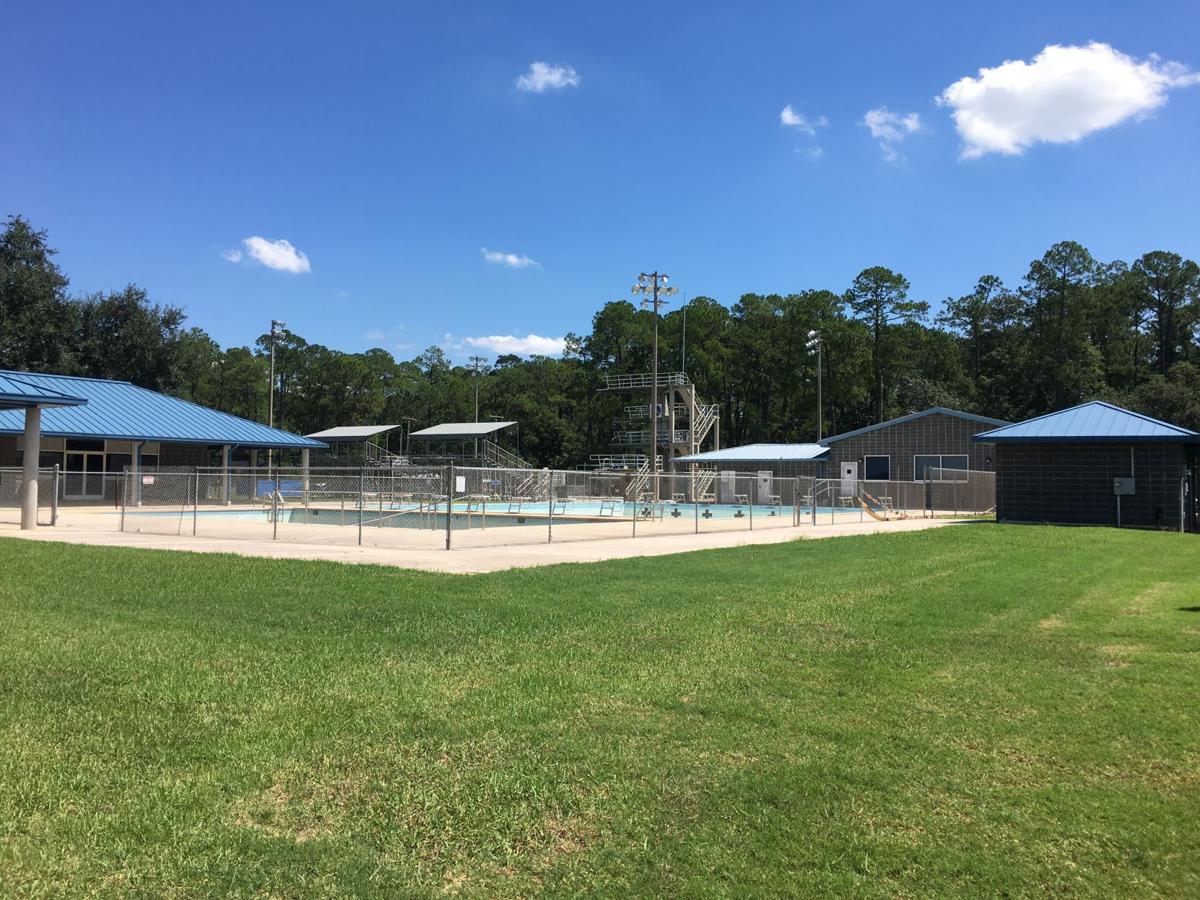 The Southwest Pool, foreground, and the diving well, background, are the two largest projects in a renovation plan under way by the Moultrie-Colquitt County Parks and Recreation Authority. 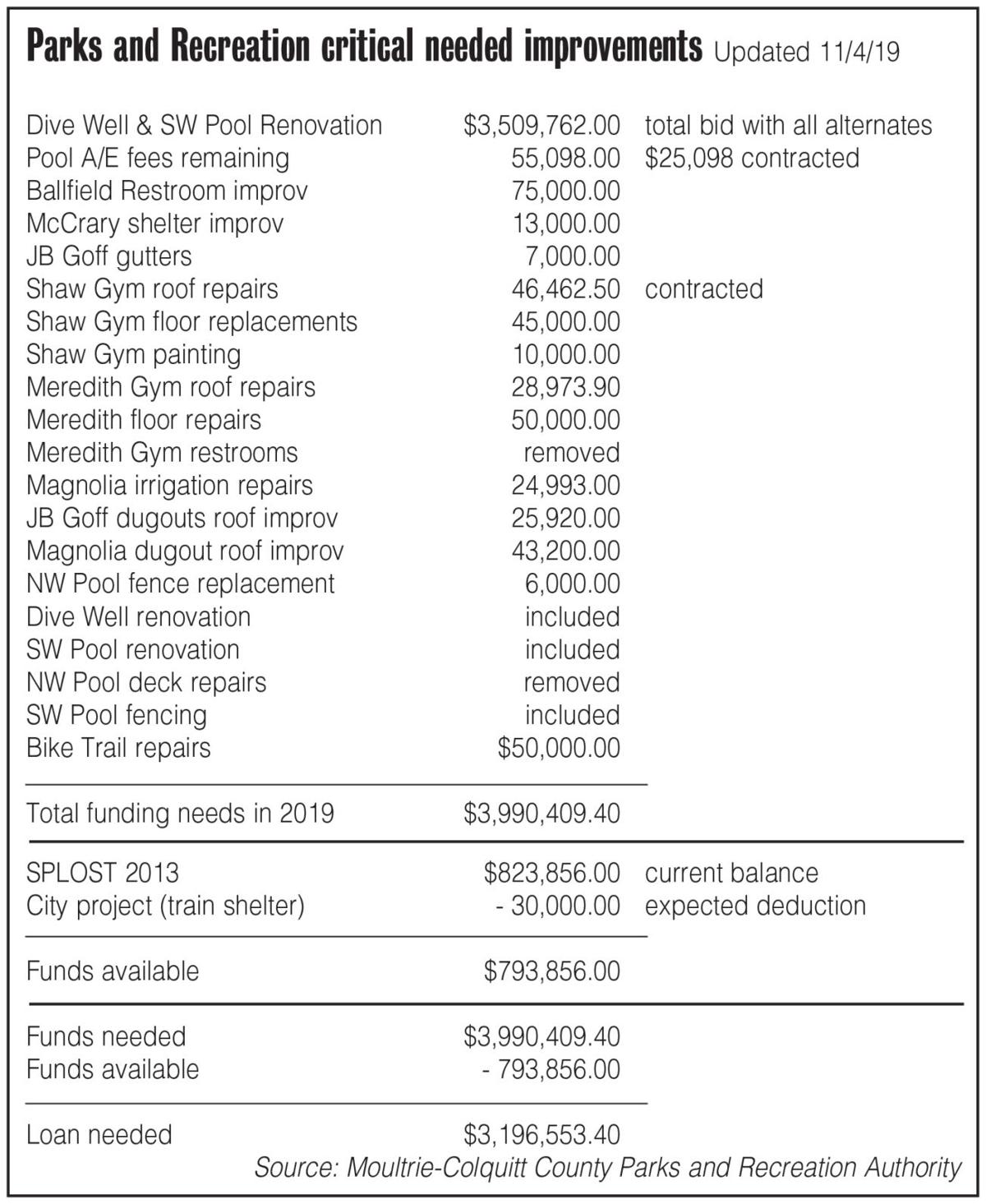 The Moultrie-Colquitt County Parks and Recreation Authority released this list of critically needed improvements and their expected costs after a Nov. 5 meeting on the projects.

The Southwest Pool, foreground, and the diving well, background, are the two largest projects in a renovation plan under way by the Moultrie-Colquitt County Parks and Recreation Authority.

The Moultrie-Colquitt County Parks and Recreation Authority released this list of critically needed improvements and their expected costs after a Nov. 5 meeting on the projects.

MOULTRIE, Ga. — The only bid for renovations to the Moss Farms Diving Well and Southwest Memorial Pool came in dramatically higher than expected, and the Moultrie-Colquitt County Parks and Recreation Authority’s executive board met Tuesday to try to decide what to do about it.

The bid saw only one contender, JCI Contractors in Moultrie, who estimated the renovations will cost $3,509,762. That’s about $800,000 more than the authority has estimated for all of its critically needed improvements combined.

MCCPRA Director Terry Peek said the authority will be talking with the architects and contractors on negotiating a solution.

“Right now, we’ve got a project that’s over budget, we’ve got a pool that’s been shut down a year and another one that’s borderline being shut down,” Peek said. “Do we let two pools sit here shut down or do we try to get the money and go put them back together?”

Of course, the answer is the latter, and so the MCCPRA is looking take out a loan for that extra money. This factored into a restructuring of the critically needed improvements’ estimated costs.

The authority now estimates it will need $3,990,409.40 this year for the most important renovations. This would include the pool and diving well renovations; roof repairs at Shaw and Meredith gyms that are already contracted; gym painting and flooring repairs; dugout improvements; gutter additions; restroom improvements; and bike trail repairs.

Currently, there is $823,856 in the bank from the Special Purpose Local Option Sales Tax approved in 2013. That means the authority would have to borrow almost $3.2 million to meet all those needs.

The authority was already planning to get a loan, Chairman Brad Gregory said in an August interview. But that loan was expected to be only about $2 million.

The Recreation Authority will levy property tax of 1.976 mills — just less than the 2-mill maximum imposed by law. As those property tax revenues come in, they were to be used to quickly pay off the loan.

Peek said it’ll be “very unlikely” that the pool and diving well renovations will be done by Memorial Day like he said before. That might be a good thing though.

“That’s one thing we’re going to look at as far as pulling from the bid package, seeing if that will cut the cost down some,” he said

Peek still needs to speak to the authority’s attorney about applying for a loan. The full authority will meet Nov. 20, but Peek said he doesn’t know if things will be finalized by that time.

The hope is to get the everything spread away by December.

“I’ve just got a good bit of legwork that’s got to be done before we know,” Peek said. “It just seems like I’m on a treadmill right now. I’m not getting anywhere, just continually running. It’s frustrating, but that’s the way it’s going.”

But it’s a race he’ll be retiring from come December’s end. With 44 years of public service and public recreation under his belt, Peek said, “It wears on you.”

“Nobody’s made me mad or anything like that,” Peek said. “I’ve just been in it a long time.”

According to him, he’d set his retirement for an earlier date but stretched it out so he could see all points covered. That time never came.

Peek didn’t want to leave until the authority was up and running, but it’s two years down the line and more challenges got thrown into his lap.

“If I keep putting it off to when I have things covered, then I’m never going to retire,” he said. “I’ve got grandchildren. I want to be able to retire when I’m healthy enough to enjoy them and do other things — be with my family more.”

The authority’s executive board has advertised its search for an executive director. It’s garnered 29 resumes so far and the board will start interviews soon to narrow the bunch.

“There are some local candidates that might be able to do a good job for us,” Peek said. “There are some outside who have applied that look promising.”

As far as helping the future new hire adjust, Peek said he’ll "probably be sitting on a beach in the Bahamas by that time — just kidding. Moultrie is still my home," he said.

“I’ll continue to stay here and be as involved as I can in the community,” he said. “I’m not going to say that I will be directly involved in these projects but I’m going to be available to help the transition.”

Until then, Peek will be making sure the authority has all it needs before his send-off date.

“I got it started and I didn’t intend to start something and not finish it,” he said.