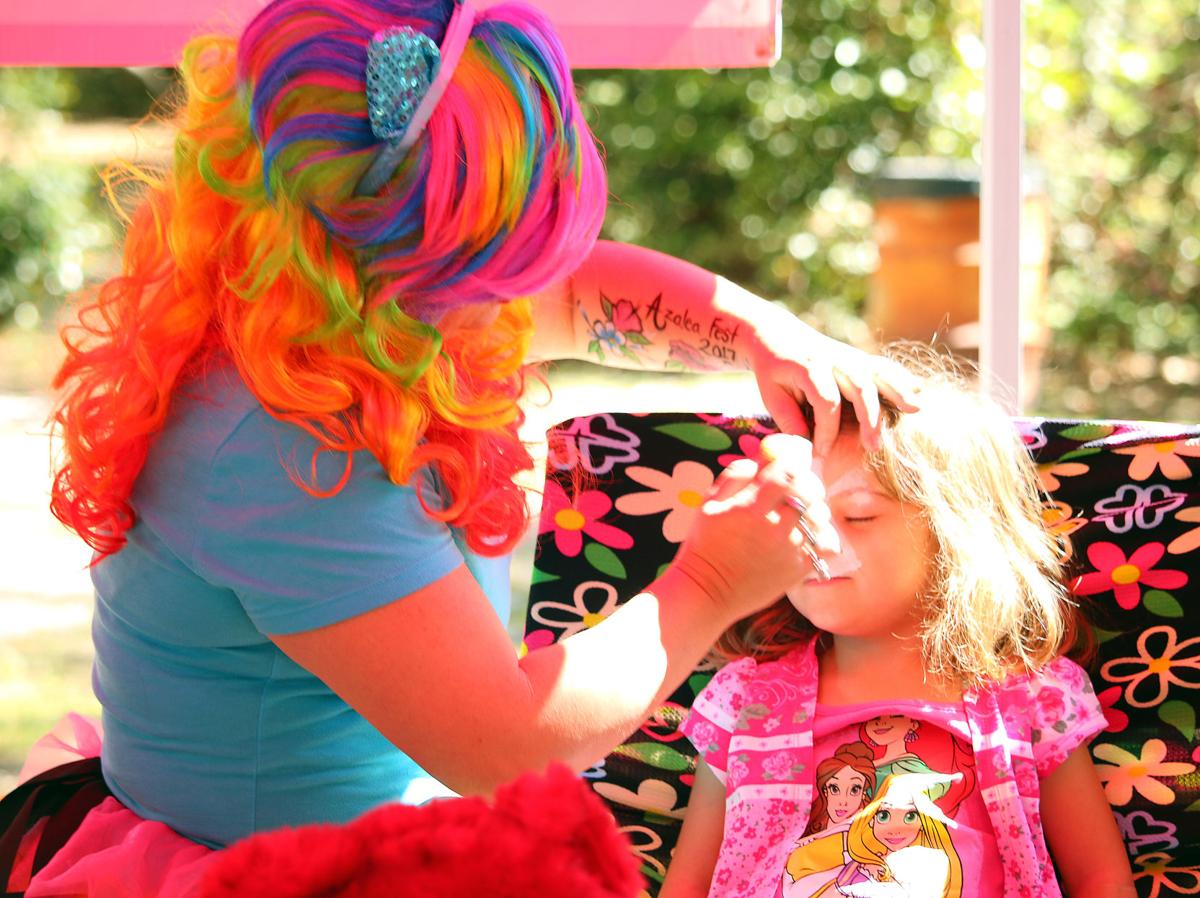 A girl has her face painted at the Azalea Festival. 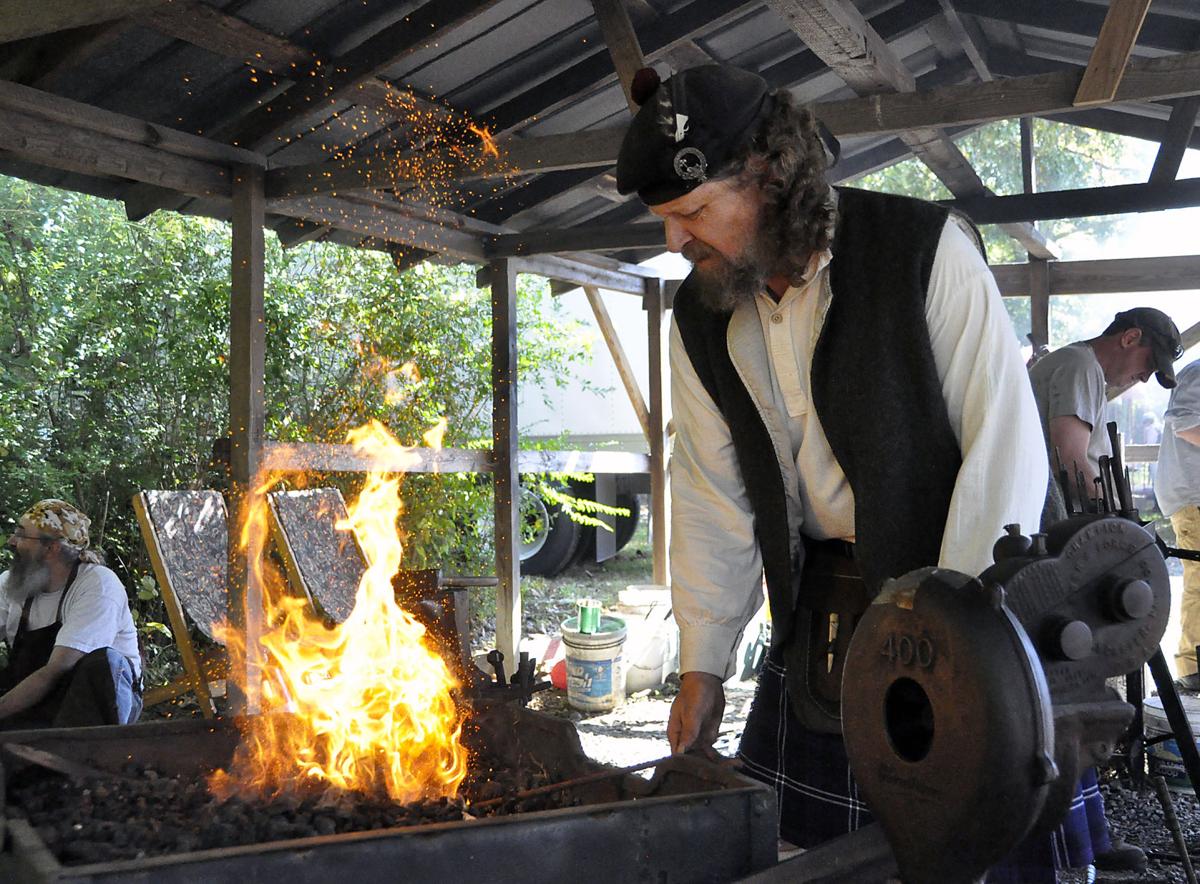 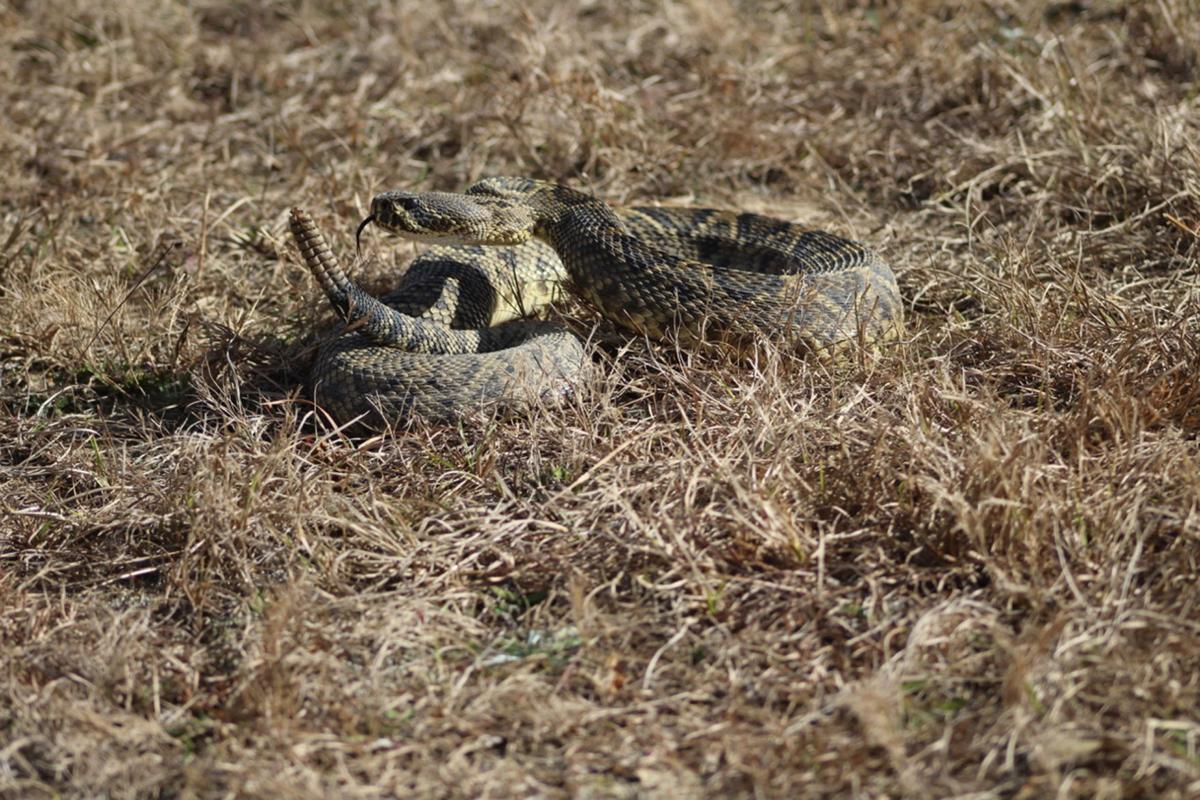 An Eastern diamondback rattlesnake “poses” during the 2018 Rattlesnake Roundup on Whigham. 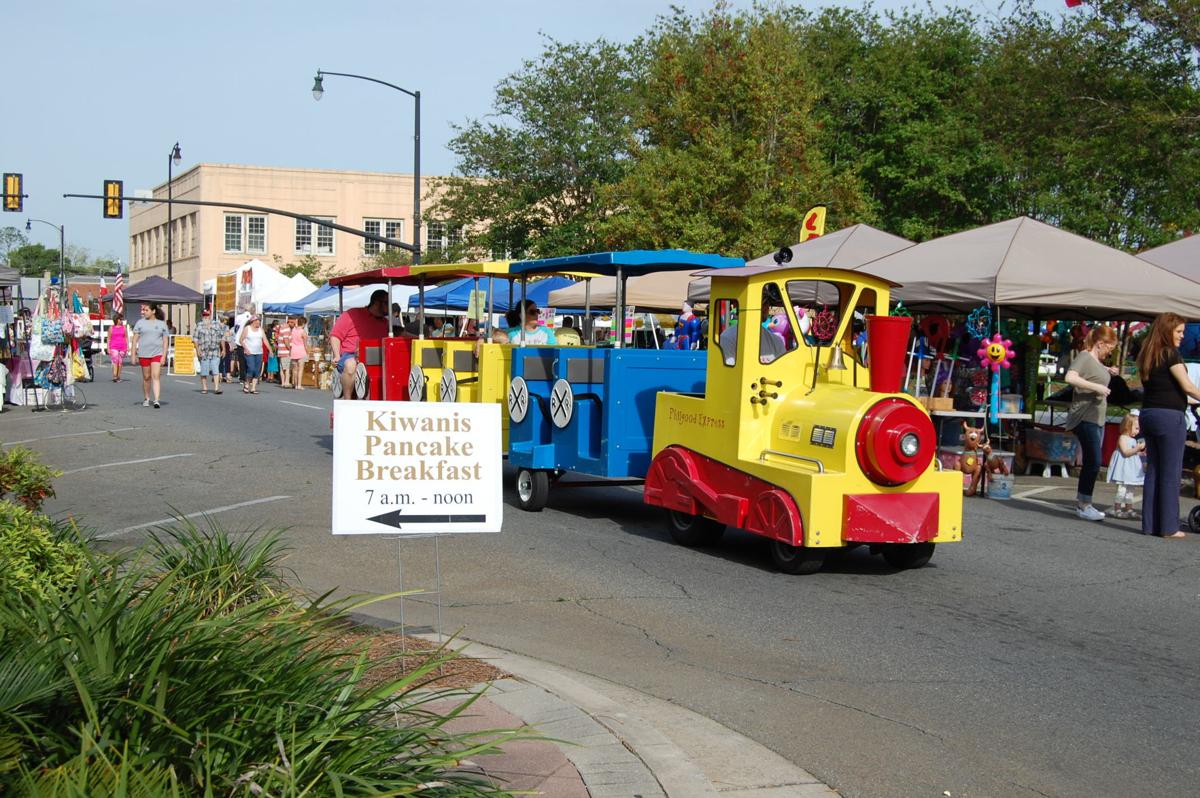 A brightly colored train circles the Colquitt County Courthouse Square during Spring Fling 2017. The train is a fixture at festivals in Moultrie. 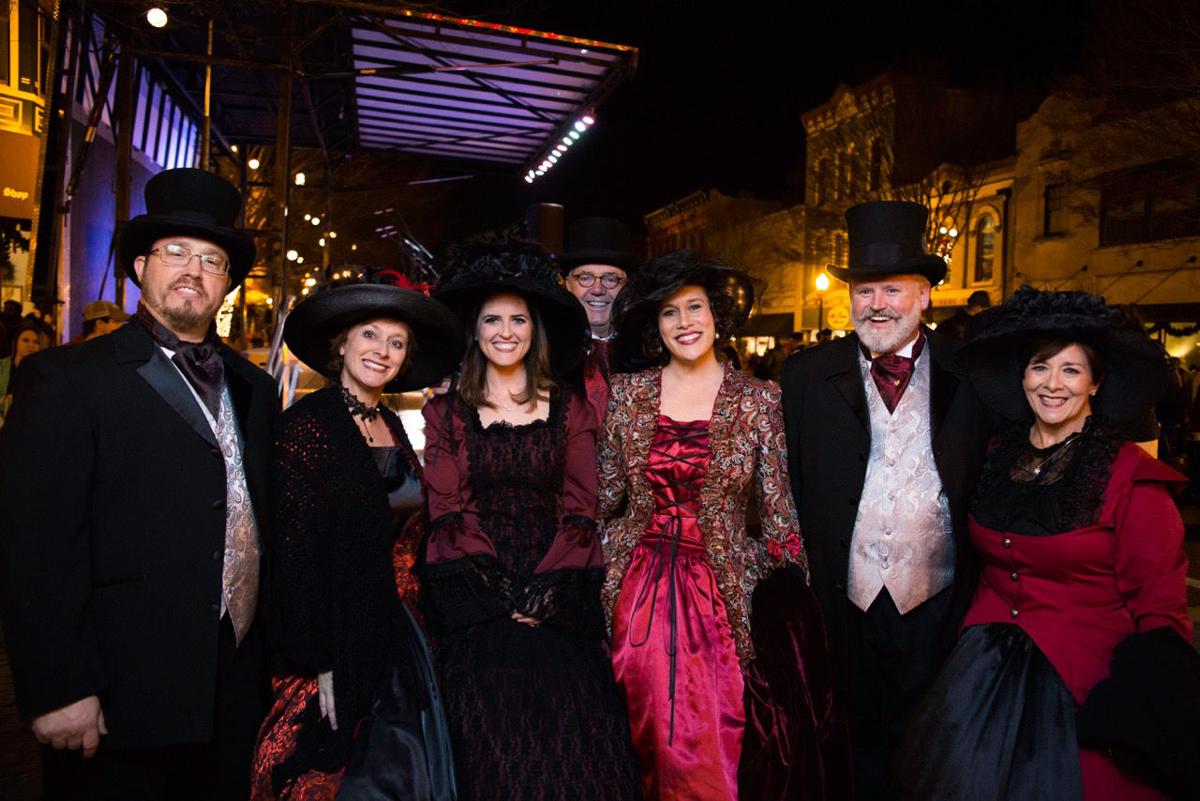 Photo provided by the City of Thomasville

VALDOSTA — The smell of hot dogs, the sound of bands and the sight of children jumping in the bouncy house: these are the signs that a town's big festival is underway.

The SunLight Project coverage area, which includes Valdosta, Moultrie, Tifton, Thomasville, Milledgeville and Dalton, Ga., and Live Oak, Fla., are taking a look at where to go for festival fun.

Held each March, the festival celebrates the abundant azaleas as well as the culture of Valdosta and Lowndes County.

The festival started in 2000 and has settled into a Saturday and Sunday event in mid-March at Drexel Park. The festival features dozens of arts & crafts vendors, food vendors, a Kids Zone, classic car show, various attractions, concerts by local bands, etc., all open to the public.

More than 220 arts, entertainment and food vendors were expected at this year's event, held March 10-11, said H. Aaron Strickland, festival executive director. About 25,000 people were expected to attend, he said.

In 2000, Joanne Griner proposed a festival to celebrate Valdosta and its status as the Azalea City. She founded the Valdosta-Lowndes County Azalea Festival and served as its director for several years. She remained deeply involved in the festival until her passing in 2016.

Among other festivals around the Valdosta area are:

• The Morven Peach Festival, held in May, celebrating one of Brooks County's leading crops.

• The Hahira Honey Bee Festival, held in October. Vendors, arts, crafts and a large parade are offered. The honey bee theme celebrates the city's past as one of the nation's leading providers of queen bees for beekeepers.

• The Arts in Black festival, on the last weekend in April in Fulwood Park, allows the local black community to showcase talented artists and musicians.

• The La Fiesta Del Pueblo event, on the last Saturday in September, spotlights the unique culture and heritage of the local Latino population.

• The small town of Omega hosts the Pepper Festival every September to mark the town’s spicy past.

• The Folklife Festival has been going on for several decades and brings to life the region’s rural history and heritage. It takes place the first weekend in April at the Georgia Museum of Agriculture and Historic Village at Abraham Baldwin Agricultural College. At the festival people can learn how to shear sheep, make pine-needle baskets and sew quilt squares. Antique tractors are on display and bluegrass music fills the air as people are transported back in time with fun events and intriguing exhibits.

• Tifton’s Rhythm and Ribs BBQ Festival, on the first weekend in March, is the county’s premier event, featuring both a professional and backyard BBQ competition, as well as children's games, arts and crafts, food and live music.

• The Fourth Annual Catfish Festival will be held Saturday, April 14, at Greenway Park in Branford.

The festival is scheduled to start 9 a.m. with vendors, music performances, a 5K run and food.

Catfish meals will be served all day at the festival.

The form is available online at suwanneerivercatfishfestival.com.

• This year will also see the 34th year for the City of Live Oak’s Christmas on the Square in the city’s historic downtown.

The chamber plans to expand the 34th Christmas on the Square to two full days with vendors plus Snow on the Square.

• The 25th Annual Wellborn Blueberry Festival is a great opportunity to stock up on everything blueberry, from blueberry jelly, jams, pies, muffins, cookies to candies, syrup and plants.

The festival will be June 2 with approximately 100 arts-and-crafts and food vendors, the country store, a car show, parade, children’s amusements and the blueberry pancake breakfast.

• The Branford River Reunion has been organizing a local Fourth of July celebration for more than 35 years.

The annual event will begin with the Suwannee River Kayak/Canoe Race; the Branford Rotary Duck Race will take place at Ivey Memorial Park and the opening ceremony takes place at Hatch Park.

The parade will be in the evening followed by a firework show.

• The Suwannee River Jam will be observing its 27th year. The festival will be from May 2 to 5 at the Spirit of Suwannee Music Park in Suwannee County.

• The 18th Wild Azalea Festival in White Springs takes place on the third Saturday of March each year.

The event is held along the Suwannee River at the Stephen Foster State Park with music, art and culture. The first Folk Festival was in 1952 when Ada Holding Miller attended a Florida Federation of Music Clubs Spring Convention as a guest speaker. When taking a tour of Stephen Foster Memorial, she told Lillian Saunders of White Springs that it would be the ideal place for a folk festival.

The lineup for the second Party in the Pines has not been announced but among the artists last year were Miranda Lambert and Keith Urban as well as Florida natives Easton Corbin, Jake Owens and Adam Sanders as well as Brothers Osborne, Maren Morris, Ryan Hurd and Raleigh Keegan.

• Mayo holds its Pioneer Day on the second Saturday of October. This year will mark the 38th Annual Pioneer Day. The event takes place throughout the town starting with a parade the morning of and continuing at the park.

During the festival, there are local vendors and entertainment by a local band and D.J. as well as an art show, crafts, toys, food vendors and games to win prizes.

"We organized the first Prater's Mill Country Fair to raise money to repair the mill," said Judy Alderman, former long-time head of the Prater's Mill Foundation. "The first fair was Mother's Day weekend 1971. That first year, we had one every month from May through December. That was awfully ambitious."

The fair continued as a twice-yearly event for almost 30 years before being scaled back to once a year.

This year's fair will run from Oct. 13-14, at 5845 Highway 2, Dalton. The fair focuses on Appalachian history, culture, music and food. There are also demonstrations of blacksmithing, spinning, quilting, rug hooking, woodcarving and hand tufting as well as tours of the mill, pony rides and canoe rides. Admission is $7. Children younger than 12 are admitted free.

• Creative Arts Guild Festival of Arts and Crafts, Sept. 15-16, 520 W. Waugh St. Dalton. The festival is free and opens at 10 a.m., Saturday and 11 a.m., Sunday. There will be live music and other performances and tours of the Guild's sculpture garden. Artists from around the nation will be displaying and selling their art.

• Thomasville's July 4 Fireworks and Festivities, 6:30-9:30 p.m. at the city amphitheater. Features activities for the whole family. Live music and food vendors in the amphitheater culminate in a fireworks show at 9:30 p.m. sharp.

• Victorian Christmas: December 13-14, 6-9 p.m. each night, downtown Thomasville/Park and Amphitheater. Turn-of-the-century downtown ushers event participants into the spirit of Christmas long ago. The event has been redesigned to better highlight Thomasville's Victorian history and heritage. Stroll through downtown and enjoy food vendors, authentic to the period performances, musicians and more. Free admission.

• Another Night of Bluegrass Concert Series. Various dates throughout the year at 7:30 p.m. Thomasville Municipal Auditorium. Presented by WPAX/WTUF Radio, in partnership with the City of Thomasville. Tickets are $10 in advance and at the door.

• Boston Mini-Marathon and Festival is the last Saturday in October. The event originated in 1979 as an opportunity for local runners to have a friendly competition. A 5K walk and one-mile fun run are for non-runners. Festival events begin in downtown Boston the night before the runs and walks.

• Whigham Rattlesnake Roundup is the last Saturday in January at Rattlesnake Grounds on U.S. 84 in Whigham, seven miles west of Cairo in Grady County. The Roundup began in 1960 as a Whigham Community Club project. Reptile experts give education lectures and demonstrations at each Roundup.

• Calvary Mule Day is the first Saturday in November in Calvary, a small town in south Grady County. Calvary's population swells to between 30,000 and 60,000 on Mule Day. More than 350 arts and crafts exhibitions, concessions, cane-grinding and syrup-making take place during the Calvary Lions Club-sponsored event.

• The biggest of Milledgeville’s yearly festivals is the Deep Roots Festival, a daylong event combining food and craft vendors, a car show, a Georgia Barbecue Association-sanctioned barbecue contest and touring musicians from across the country. The event normally takes place in late October in downtown Milledgeville.

• Since 2014 the Milledgeville Main Street Downtown Development Authority has put on a yearly “Hometown Celebration,” which brings music, activities, and tables from local organizations to downtown. Held in celebration of Milledgeville’s inclusion on the National Main Street Center’s “Great American Main Street Cities” list, the daylong event has been held in April for the past two years after August heat significantly diminished turnout in 2016.

• Milledgeville’s First Friday celebrations are held on the first Friday of non-winter months by Main Street and feature local bands and activities for families and kids. Also held in the heart of downtown, the event began in 2012.

• The Kitchens Road Old Time Family Festival annually draws huge crowds to west Baldwin for a weekend of food, country and bluegrass music and a car show. Started by local residents Randy Newton and Bobby Kitchens on Kitchens’ grandfather’s land, the festival is slated this year for Nov. 3 and 4 and is expected to draw several local musical guests.

• The Spring Fling and Backyard BBQ Festival will return with an outdoor concert featuring the Swingin’ Medallions Friday, April 20, and will follow with activities on the courthouse lawn and on the streets and sidewalks of the square the following day.

A downtown festival to celebrate the arts has been circled on Colquitt County’s to-do calendar for more than 30 years.

The annual barbecue contest was started a number of years ago by the late Rocky Jones, his wife, Joy, and Greg Hersey.