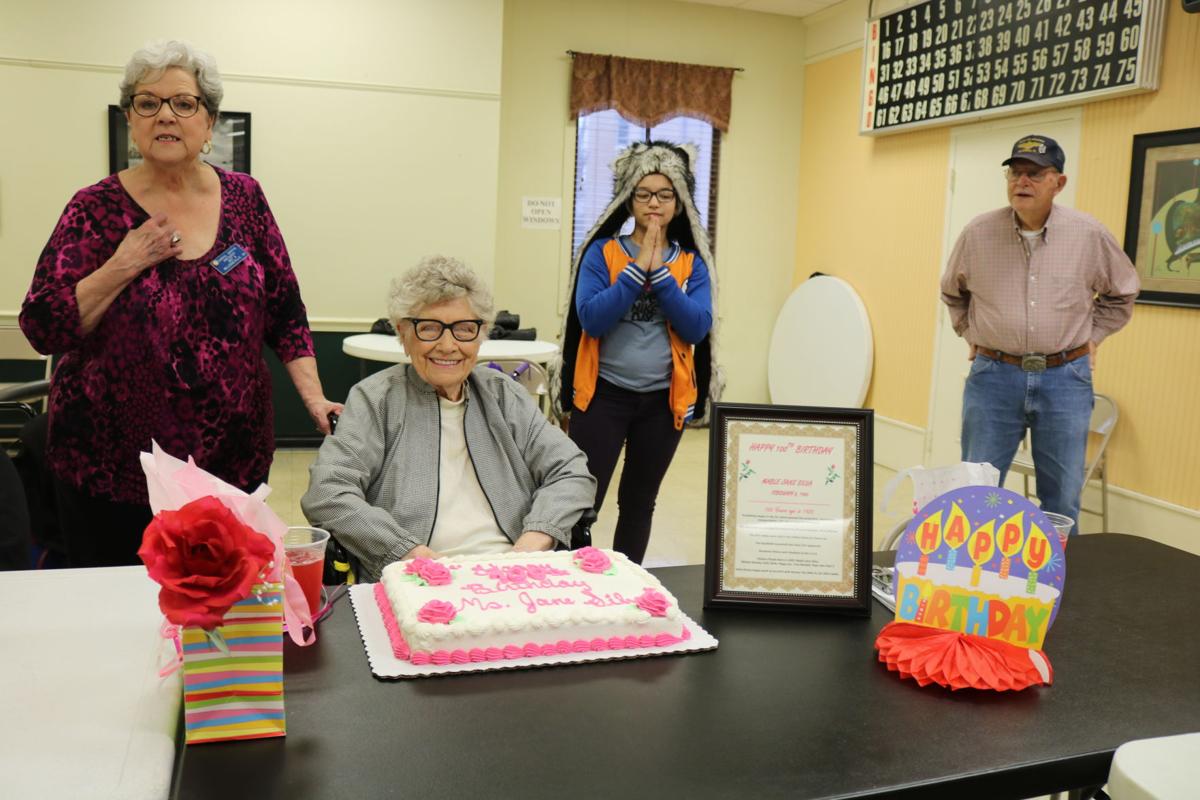 Jane Silva, an Army veteran of World War II, poses next to her cake during an early party honoring her 100th birthday last Wednesday. The party was arranged by Carol and John Griffin of the Morris-Little American Legion Post 6 in Milledgeville. 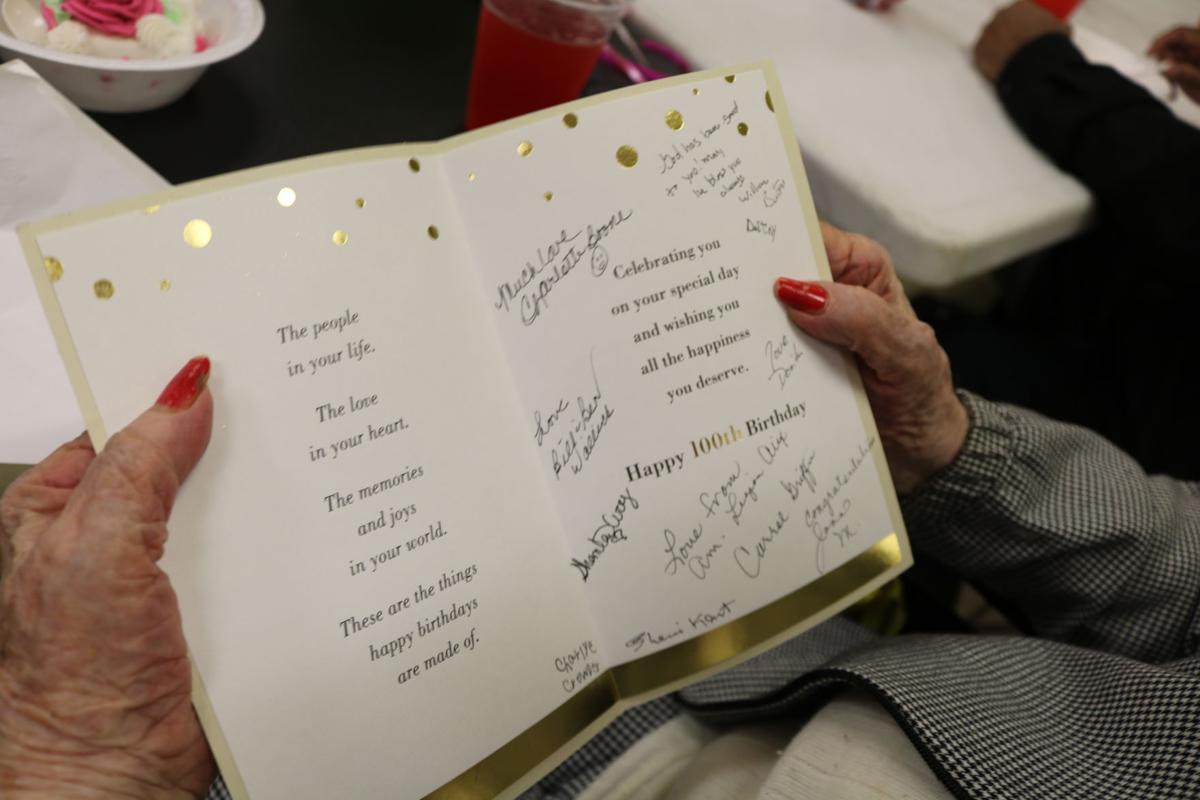 Jane Silva opens one of the many cards she received last Wednesday during an early 100th birthday celebration at the Georgia War Veterans Home in Milledgeville. She was treated to another big birthday party on Saturday night at the VFW post near Sparta.

One would never know that Jane Silva just celebrated her 100th birthday on Saturday.

And she wouldn’t have it any other way.

In fact, those are the secrets that she believes hold the keys to longevity.

And of course, trusting and obeying God.

“I’m living proof that those things are true,” said Silva, who did something few women ever did in the Army during World War II. “And God has everything to do with everything.”

During the war, she helped save countless lives, although she never experienced what life was like on a battlefield or in the water as soldiers experienced when they were on the open seas in the Pacific Ocean.

Silva was born and grew up about 10 miles outside of Milledgeville in Baldwin County 100 years ago this past Saturday. She celebrated an early 100th birthday with a party last Wednesday at the Kenneth W. Birdsong Recreational Center at the Georgia War Veterans Home.

The party was arranged by Carol Griffin with the Morris-Little American Legion Post 6 in Milledgeville. Griffin’s husband, John, serves as the post commander.

Silva was joined at that party by several veterans who reside at the Georgia War Veterans Home.

Last Saturday night, Silva was given an even bigger birthday bash at the VFW post near Sparta. The party honoring Silva drew dozens of people, who brought her gifts and special cards.

“It was all just wonderful,” Silva said of her birthday celebrations.

“I grew up on a farm just before you get to Hancock County,” Silva recalled.

She graduated from Peabody High School.

“It was an all-girls school at that time,” Silva said, noting that 50 something girls were in her graduating class. “The school included city and country girls.”

Silva said after graduating from high school she studied nursing at Central State Hospital, which offered a nurses training program back then.

“I was learning how to do a lot of things that nurses do,” Silva said, explaining that she had already earned a lifeguard badge. “I had learned how to take a patient’s temperature and blood pressure — things like that.”

Asked what inspired her to think about becoming a nurse, Silva said she didn’t know other than it was a way of helping people.

“I’ve always loved helping people and giving of myself,” Silva said. “That was about the only thing that a poor girl could do back then.”

She remembered wearing the old-fashioned nursing caps and seeing photographs of nurses hung on the walls of the hospital.

And like other nurses, Silva said she wore a white dress, white stockings, and white shoes every day to work.

She was only in nursing school for about a year before tensions between America, Germany and Japan resulted in the nation’s second world war.

Silva soon joined the Army, where she spent the next three years of her life.

Asked if it made her feel good to know that she and other women like her were responsible for saving the lives of a lot of young soldiers, Silva replied, “It does. It really does. I think of it sometimes, too.”

Silva said she remembered there were five Naval officers from Sanford, Fla., who got into an undertow.

“They didn’t know how to get out,” Silva lamented. “And they were getting further and further out to sea. They couldn’t have lasted very much longer. So, I happened to be on guard duty, along with two others and we helped them swim out of it.”

Every week for a period of time, Silva and her two female cohorts received a box of candy from those Naval officers.

“I will always remember that story,” Silva said, saying she enjoyed reminiscing about that time in her life.

Now that she is a resident of the Georgia War Veterans Home in Milledgeville, she said her life is surrounded by memories of yesterdays and years past.

“I hear a lot of stories from these fellows about their time in wars serving our country,” Silva said. “I like hearing their stories.”

Silva said her memory is as good as it can get for someone her age.

“I remember everything since I was 3 years old,” Silva said.

Asked about some of the changes over the last century, Silva quickly responded.

“Oh, there’s been a lot of changes for sure,” she quipped. “I know I don’t want to live another 50 years to see what’s it like; I know that much.”

Silva said things seem to worsen every day and that such isn’t good.

“For one thing, all the young people seem to be getting in trouble with drugs and all that kind of stuff, and that’s not good,” Silva said. “It doesn't seem to get any better; it just seems to get worse. All you can do is say a prayer and hope it does get better.”

She said the best advice she can offer young people is for their parents and grandparents to get them in church as much as possible.

“That’s what they need more than anything is God’s teachings,” Silva said. “If we can get them in church, they are bound to learn something good.”

Other things in life have changed, too. She no longer talks on a rotary phone or land line phone.

Instead, she’s joined the majority of the people around the world who now communicate by cellphone.

“I still don’t like talking on them a lot, because I can’t hear as well,” Silva said. “And it’s hard to see who it is calling. I can’t always go and get a magnifying glass.”

Silva said she looks forward to the activity time every day at the Georgia War Veterans Home.

“I go to everything that is activity, because I just love it,” Silva said. “They have made an artist out of me.”

She uses watercolors to paint images of things from the past, like the big barns on the farm where she was grew up as a girl.

“I’ve got two of my paintings hanging on the wall in my room,” Silva said with a big smile. “The paintings are of two different barns that my daddy had when I was growing up.”

She said she had actually impressed herself by learning to paint at her age.

“It’s so much fun and so rewarding to me,” she added.

Nancy Baker Pelham, 96, passed away Sunday, Feb. 23, 2020. Services will be held at 11 a.m. Wednesday, Feb. 26 at Sinclair Baptist Church with the Rev. Ricky Stubbs officiating. Burial will follow at Washington Memorial Gardens. Mrs. Pelham was a native of Brownwood, Texas but had made her h…