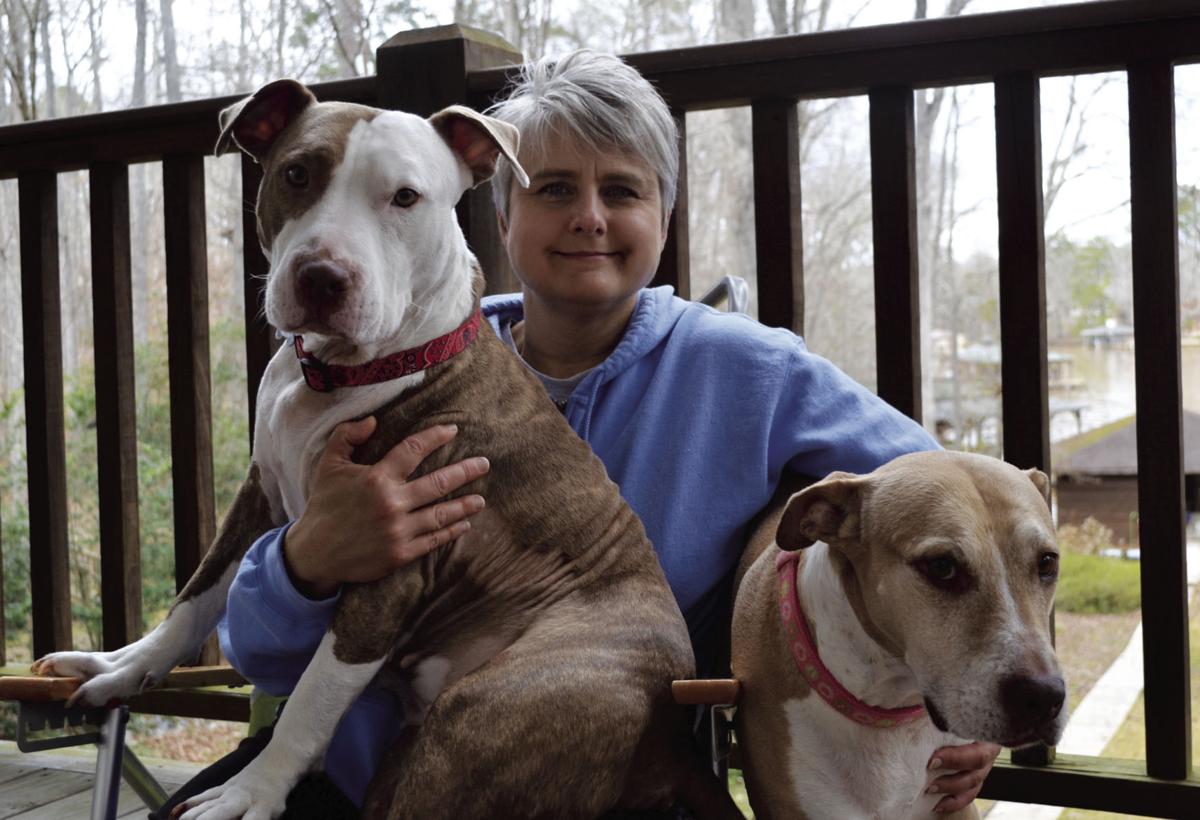 Pam Peacock with her pit bull mixes Camille and Brooklyn. She adopted them from the Baldwin County Animal Shelter. 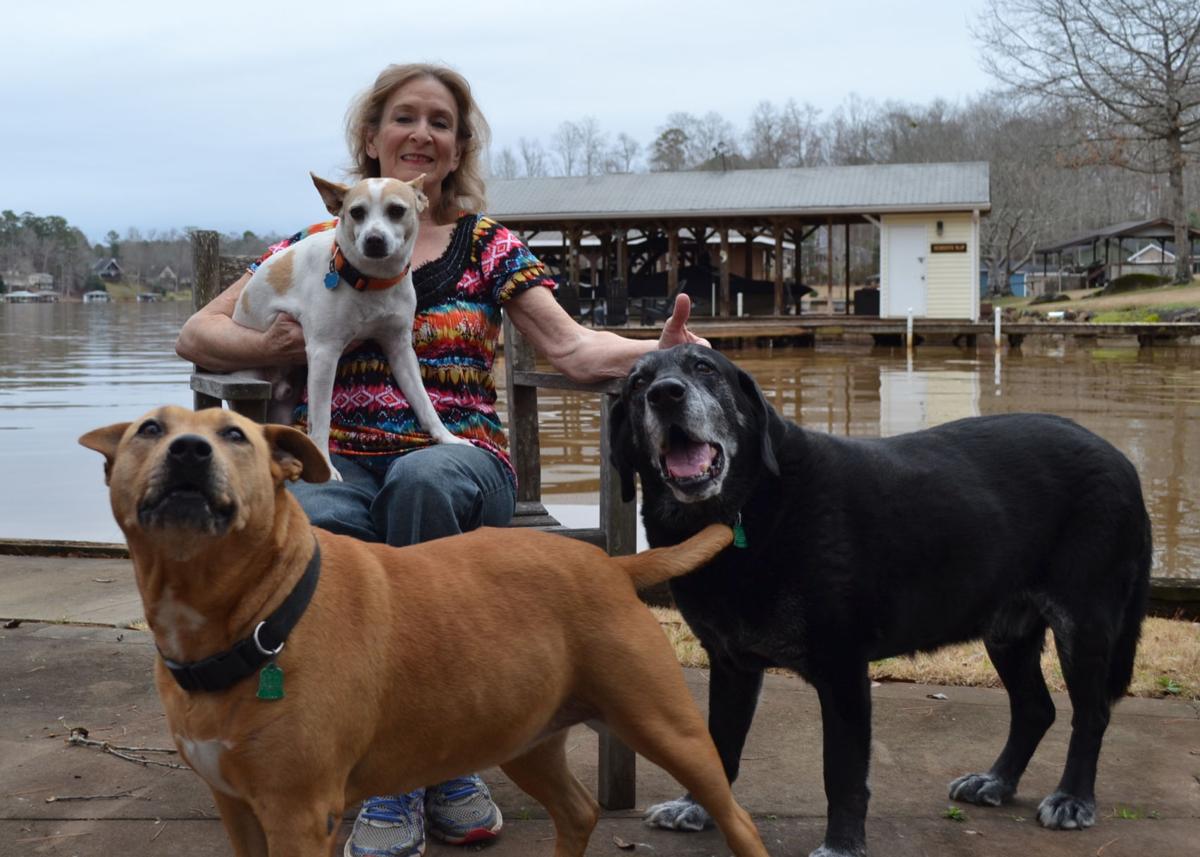 Judy Veal Lawrence with her dogs Pup, Dixie and Buddy. She also has Chet, a female great pyrenees dog.

Pam Peacock with her pit bull mixes Camille and Brooklyn. She adopted them from the Baldwin County Animal Shelter.

Judy Veal Lawrence with her dogs Pup, Dixie and Buddy. She also has Chet, a female great pyrenees dog.

Both are pittie (pit bull) mixes that she adopted from the Baldwin County Animal Shelter.

Both had been abused. Both had been hit by a car. Both have the scars to prove it. Both were in a horrible situation.

Camille had a peg leg because a broken bone was allowed to heal incorrectly. Brooklyn had been a part of a puppy mill.

Peacock, one of the founders of Paws4Change-Baldwin — a non-profit formed in 2018 by a group of animal advocates, said, "adopting Camille really opened my eyes to what's out there. My son saw her on the (shelter) Facebook page and she was getting toward euthanasia — really close.

"I said, ‘Yessss … and I'm not going to let them put that dog down. I'm going to get her. She has the most soulful eyes."

Brooklyn was adopted by Peacock a year later.

"I can't imagine my world without those two," Peacock said. "People say not every one of them can be rehabilitated, and that's true — some can't. But for the most part, they can. I'm going to tell you, I'm a big advocate for pit bulls. It just takes someone with experience and someone who knows the breed."

This past year brought a big breakthrough for Peacock and Judy Veal Lawrence, as well as other members of Paws4Change-Baldwin.

By writing letters to the editor, lobbying members of the county commission during the public comment period of the meetings, face-to-face talks with county officials, volunteering and fundraising, the group helped bring about many changes.

(bullet) The old county jail was repurposed into a new animal shelter. At the dedication in December, Baldwin County Manager Carlos Tobar said it is "the equivalent of a $1.5 million shelter" even though "it only cost $220,000."

(bullet) The commissioners approved changes to the animal control ordinances, including the prohibition of chaining and tethering of dogs to a stationary point.

(bullet) Another new ordinance reads: Cruelty (to animals) is prohibited. As a result, at least two Baldwin County residents had warrants issued for cruelty to animals in late December and early January.

(bullet) In most cases, a panel of three must decide which animals will be euthanized. It used to be at the sole discretion of one person.

Paws4Change-Baldwin started with "kind of a vision that I had," Peacock said.

It's a 501(c) non-profit, "which means we are an IRS approved charity, and all donations to us are tax deductible," Peacock said. "We have 100 percent accountability in everything we do."

It's all volunteer. Nobody is paid.

Paws4Change-Baldwin is funded by donations and through special fundraisers, such as bake sales.

The funds are used to provide needs at the shelter that are not provided by the county, such as vaccines and supplies, according the Paws4Change-Baldwin mission statement. The organization also provides support to the Animal Rescue Foundation (ARF) and to the Baldwin County Jail Dog Program.

For example, there were a couple of cruelty cases that the shelter had, and they reached out to Paws4Change-Baldwin to do a fundraiser because both dogs needed leg amputations.

"Local fundraisers are a way for people to give back," Peacock said.

"They might not be able to volunteer, but they can help with their money," Lawrence said. "And we get good responses. There are a lot of people in Baldwin County who donate."

Their biggest focus now is on spaying and neutering for dogs and cats to prevent overpopulation and shelter overcrowding.

They are joining with Saving Animals from Euthanasia (SAFE), a reduced-cost mobile spay and neuter clinic, to help lower the unwanted litters of dogs and cats.

"We see the need to keep the animals out of the shelter, and the only way to do that is spay and neuter," Peacock said.

"We have to stop reproduction because nothing is going to change as long as there are so many animals being born," Lawrence said.

Two clinics have been held and plans are for the mobile clinic from Macon to be here quarterly.

Peacock and Lawrence have a plan to make sure every person who signs up pays their non-refundable desposit and that they show up. Paws4Change-Baldwin helps discount the fee.

"It's very limited availability," Peacock said. "We have 26 appointments. That's really a lot in one day."

So why do Peacock and Lawrence spend so much time, and frequently their own money, to help animals?

Peacock got started as a foster for dogs more than a decade ago. The adoption coordinators would want to get an animal out of the shelter and into a foster home until it was ready to go to its permanent family.

The first time she fostered a dog for only a weekend. Now, she has one who will be with her for several months until he is heartworm negative. Klaus, a white, American Bulldog mix, is deaf.

"He overcompensates" with his other senses, Peacock said. "Sometime he just stares at the floor, waiting for something to fall."

Lawrence has four dogs — Buddy, Chet, Dixie and Pup — who were adopted as strays. Her husband, Jay, says four dogs are too many, "but Dixie is the love of his life," Lawrence said. "One of us cooks breakfast for them every morning."

Long-time dog lovers, certainly, Peacock and Lawrence have a bond that grew stronger as they volunteered together at the old county animal shelter.

They knew they had to take action.

Lawrence jokes that Peacock is the "brains" and that she is the "charmer, the clean-up crew."

Peacock and Lawrence both laughed.

"We don't have a life," Lawrence said.

Above all, Peacock and Lawrence were a team in facilitating change.

Those two are the "best ladies in the world," said Charlotte Perrin,  the manager of PetSmart and a member of the Paws4Change-Baldwin board.